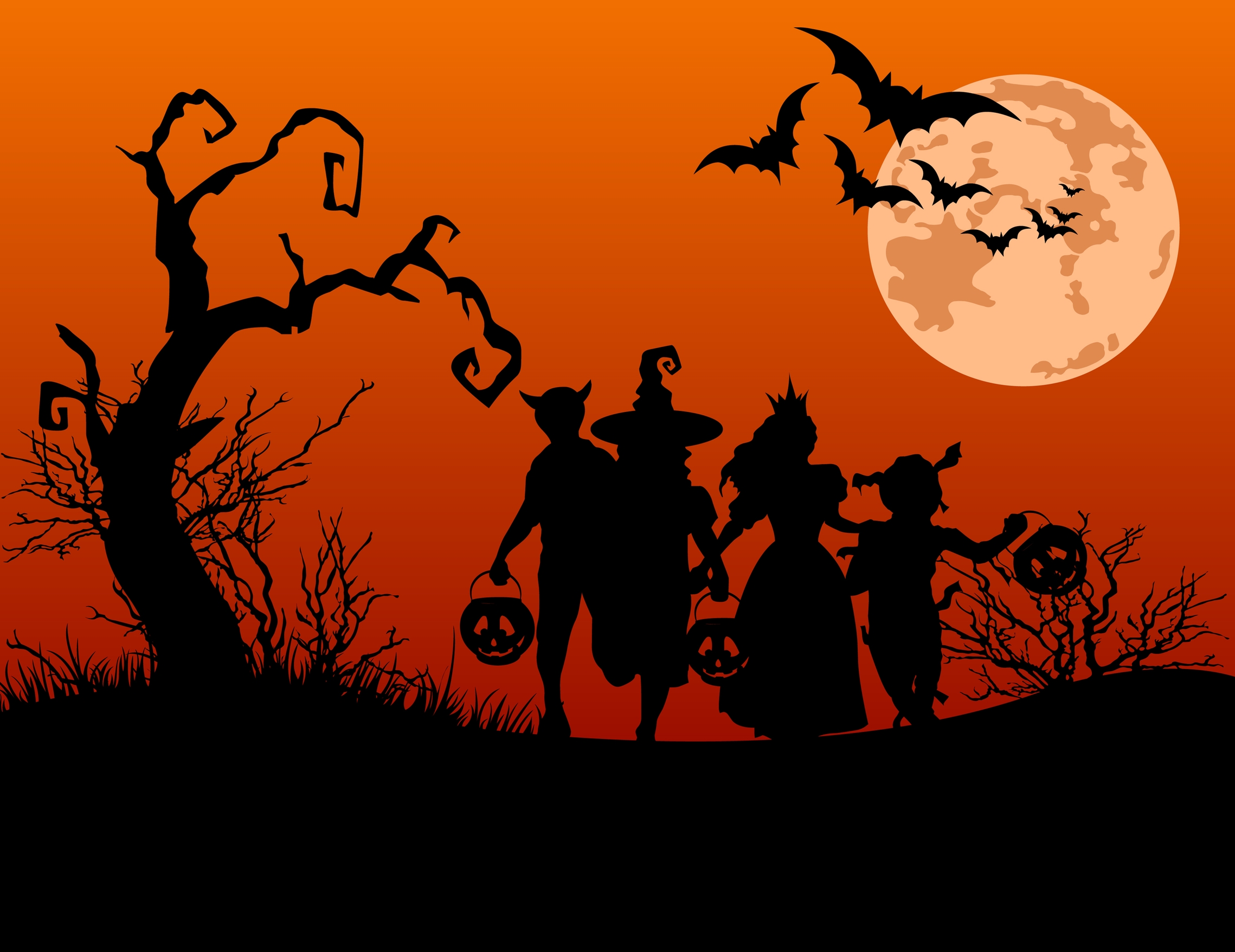 Channeling the suspense of your favorite horror films, “The Haunting” by Kamelot truly lives up to its name. From its first ominous notes the tension builds, punctuated by strokes of drums and guitars.

Lead singer Roy Khan comes in with a vampire’s deadly charm, gliding through his full vocal range with ease. And that’s all before the chorus — after a minute of this escalation, the guitars break free, Khan belts out his best and a second voice joins the fray. Enter Simone Simons of the Dutch band Epica, bringing a seductive echo that adds warmth and depth to Khan’s raw power.

It’s an entrancing duet that balances the dark and the light, the heavy and the delicate. The band stays in the background for this showcase of singers, though Thomas Youngblood gets a chance to shine during the guitar solo.

Like many of Kamelot’s songs, the lyrics speak of loss and longing and hint at the afterlife: “Somewhere in time I will find you and haunt you again.” If you’re looking for a Halloween song at once eerie, grand and beautiful — or just something different — you’ll love “The Haunting.”

“Time Warp” is easily the best song in the “Rocky Horror Picture Show.” If you’ve never seen the movie, it’s about a couple named Janet and Brad getting stranded after their car breaks down. They then walk up to a mansion owned by a dude named Dr. Frank-N-Furter and get totally sucked into his weird world.

Although the plot reads like a slasher flick, it’s actually a fun 70s musical that was meant to poke fun at B-grade horror movies. During this number, members of Frank-N-Furter’s crew teach Janet and Brad how to do the Time Warp. The most fun part of the dance is definitely when they instruct you to do the pelvic thrust. You can make a fool out of yourself doing this and no one judges you because the song told you to! It’s like the Halloween version of the Cupid Shuffle — play this at a party, and you’ll have everyone up and thrusting at each other.

It starts off with a bassline wobbly enough to make your inner-ears go haywire, yet subtle and low enough that the song needs to be sufficiently blasted to achieve the full effect. Soon after comes the hi-hats, skittering like rats’ feet across a floor they don’t belong on. The best part, though, doesn’t come until the chorus.

After they each utter perfectly creepy verses littered with middle-finger imagery and Death Grips references, lead rappers theOGM and Eaddy hit a chorus that’s even more unsettling. The two simultaneously whisper a disturbingly catchy chorus in voices eerily reminiscent of that infamous girl from “The Grudge.” This song requires two plays at a party: one to warm up ears to the idea of being sonically infiltrated, a second for your freaky party people to get down to something different.

If Halloween had an affair with EDM, KSHMR’s “The Spook” would be their lovechild. “The Spook” perfectly embodies the frightful spirit of Halloween. Harsh and ominous drum notes complement the song’s chilling opening declaration: “There is no running from the Spook.”

A bouncy synthesizer beat then takes over the song, sending an electric energy down your spine. Ghostly wails accentuate each bounce, adding to the suspense. The tune paints a scene straight out of an animated horror movie. A skeleton pounds on the organ while ghouls run amok and the dead rise from their graves. The suspense continues to rise until a voice declares, “Don’t be scared.”

Then, the beat drops. A chorus of ghostly wails takes over the synthesizer. A contagiously bouncy beat takes over you. At this point, you’re probably already jumping and dancing like you’re possessed. Suddenly, a sinister voice halts the beat. It hauntingly sings a verse reminiscent of a children’s lullaby before the song moves into one last explosive drop. If you’re throwing a party and you need the perfect song to give it the Halloween atmosphere, then play “The Spook.”

What says “Halloween” better than the title “Martians vs. Goblins?” In one of the eeriest rap songs of the past decade, The Game and Tyler the Creator deliver sharp, disturbing lines that will leave you hoping none of them carry any truth.

We are talking about one of those songs that caused your parents to set up a content barrier on your computer when you were a child … One of those songs that should have an extra-large “parental advisory” notice in the bottom corner of the cover art. What more could you possibly ask for from a Halloween-related song?

Highlights of the track include The Game’s graphic depiction of harming Lil B, Lil Wayne’s semi-decipherable chorus and Tyler’s explicit lines regarding Bruno Mars. If “Martians vs. Goblins” leaves you yearning for some complementary visuals, look no further than The Game’s heart-warming music video, fully equipped with creepy old doctors, bloody corridors and plenty of other fun treats. On a final, serious note, this track will instantly energize any Halloween party, so don’t miss your opportunity to see a crowd full of happy (but also slightly-creeped out) faces.

Jay Hawkins’ “I Put a Spell on You” has been entrancing listeners since its release in 1955. Everyone has a different version of the song that they’re familiar with, each one seductively creepy and perfect for a chilling Halloween atmosphere.

The original, recorded by blues singer “Screamin'” Jay Hawkins, is mesmerizingly maniacal, with Hawkins’ vocal outbursts in between lyrics. If the dark tone of the song wasn’t enough to make this a Halloween classic, the spell-and-witchcraft lyrics will certainly make your skin crawl.

Hawkins even originally performed the song coming out of a coffin onstage with smoke all around in Halloween fashion. “I Put a Spell on You” is sure to pull you into the spirit of Halloween with its irresistible darkness.

Now let’s say you want some music from this decade that holds onto the 80s vibe of “Thriller” that you could dance to in that dimly lit, crowded living room on DP. What could possibly fill that missing piece of your Halloween party? The answer to your problem may lie in post-punk revival meets electro house “Heads Will Roll (A-Trak Remix)” by the Yeah Yeah Yeahs.

Originally released in 2009, “Heads Will Roll” has been the subject of many remixes and mash-ups, yet it retains its wholesome, angst-driven alt rock quality. “Heads Will Roll” mashed up with “Thriller” on Glee seamlessly, leaving one to wonder how this could not be considered an instant Halloween classic.

For those who aren’t into the dance party mood, the original is an unmistakable must for the small kickback you’re hosting. And for those who plan to make this the best Halloween party ever, the A-Trak remix gives it an extra dance quality that is bewitching and infectious.

Want a fast-paced, spooky song with creepy instrumentals that you can dance to with no shame? Then Imogen Heap’s “Aha!” is the perfect Halloween song for your party. (And yes, it’s that Imogen Heap, otherwise known as the original source of the “Mmm Whatcha Say” meme.)

Imagine an evil spirit writing a song using children’s nightmares for inspiration and you’ll have a pretty good idea of this song’s unique sound. The feeling it evokes is similar to one elicited by an orchestra when it suddenly switches to a minor key — the temperature in the room seems to drop 10 degrees and you feel like you should be running, but you’re not sure to where or why.

With its haunting strings and evocative background vocals, this song is the perfect combination of sounds to get everyone in the Halloween spirit. The instrumentals will get your blood pumping, but the lyrics will most definitely keep you listening — what on earth does “wheat, meat, dairy-free, tee total happy clappy” mean? No one’s entirely sure.

But it’s alright, because Imogen Heap’s voice is so naturally compelling and her compositions so enthralling, it’s difficult not to feel something when she sings. If you’d like your guests to have a great time dancing and a hard time forgetting the music, this is a song you’ll definitely want to add to your list.