The Daily Nexus
Isla Vista
UCSB Officials, A. S. to Begin Preparations for Approaching El Niño
October 29, 2015 at 5:00 am by Naomi Stolpner 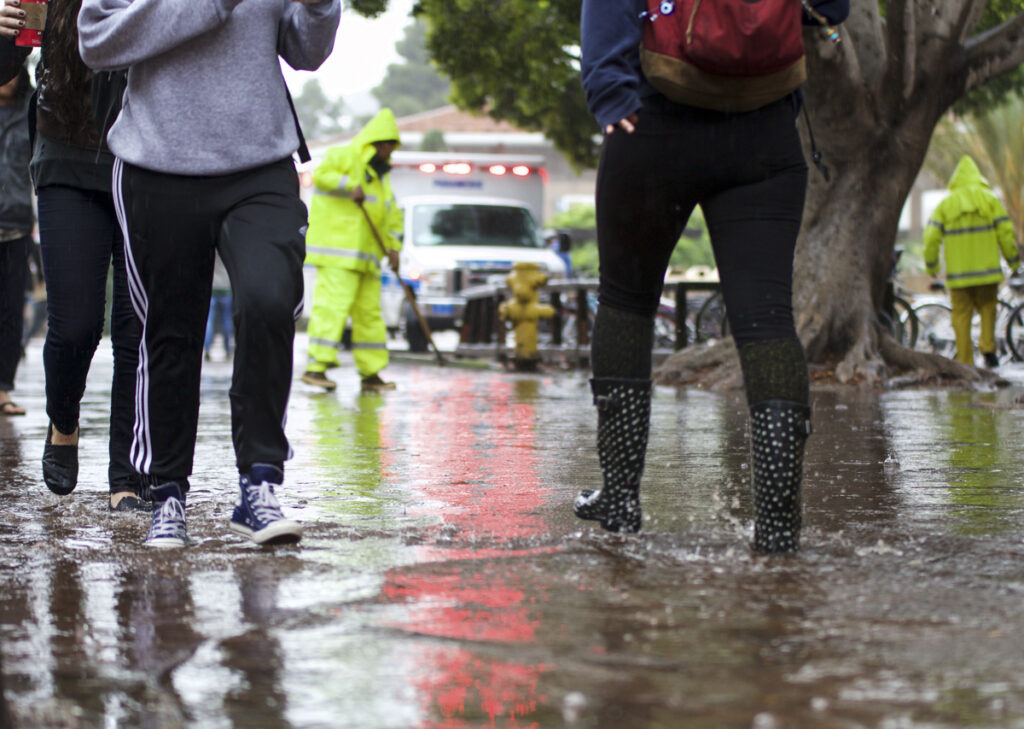 With a weather anomaly such as El Niño, it can be difficult to predict how severe the incoming weather changes will be, so it is wise to prepare for a worst-case scenario. Stephen Manga/Daily Nexus

University officials and the Associated Students (A.S.) Public Safety Commission have been coordinating with emergency response teams and local public health organizations to prepare for the upcoming El Niño, expected to hit Southern California this winter.

El Niño is a weather anomaly characterized by higher-than-average ocean temperatures in the equatorial Pacific, causing an increase in rainfall over the Eastern Pacific area. Isla Vista residents are advised to have an emergency supply kit, know the location of their electrical breaker and coordinate with landlords on gutter maintenance.

According to Vice Chancellor for Administrative Services Marc Fisher, UC Santa Barbara is preparing for El Niño by preparing emergency supplies, building sandbag barriers, testing emergency generators and repairing gutters and storm drains. Fisher said he hopes El Niño will be mild, but administration is preparing the campus for heavy rains and winds.

“We are hoping for the best, but planning for the worst,” Fisher said in an email.

According to Fisher, past El Niño weather has made campus roads and local freeways inaccessible.

“In 2005, the La Conchita landslide occurred at the end of a 15-day period of record rain shutting down Highway 101,” Fisher said in an email.
Fisher said the administration and A.S. Bike Committee are coordinating to prepare bike paths.

“From each storm that we encounter, we look at areas that we can build upon and institute the necessary changes,” Fisher said in an email. “We continue to work with A.S. Bikes to improve bike path conditions.”

“Presently we are focused on activities such as completing foundations, installing all-weather traffic surfaces on construction sites, applying waterproofing to structures where possible and ensuring that water runoff from rains is filtered and controlled,” Fisher said in an email.

“What we’ve been doing is reaching out to [Campus Emergency Manager] James Caesar, Marc Fisher, both the fire departments and talking about how we can best take their expertise and take their message and be the liaisons to the students because we have the communication channels for that,” Calvert said.

Calvert said because El Niño is unpredictable and irregular, the commission is preparing for conditions more severe than past averages.

“We’re looking at this year as having above average rainfalls, above average thunderstorms, wet weather, and with that in mind, we’re doing our best to prepare,” Calvert said.

According to Calvert, the Commission has been studying California’s response to the 1998 El Niño.

“We’ve been researching the ’98 event because that’s the closest parallel and seeing what went right there and what went wrong and trying to basically improve on that and take some lessons from that,” Calvert said.

Calvert said while the current drought has created soil conditions prone to flooding and mudslides during wet weather, the university and most areas of I.V. are not in flash flood zones.

“The nice thing is that Isla Vista and campus, basically to an extremely large extent, aren’t in flash flood areas,” Calvert said. “There’s one area north of FT that is in some type of a flood zone, but that’s about it. What we’re more worried about is storm drains clogging up and that causing flooding.”

“I was studying pretty late for a midterm and got notifications on my phone about a flash flood, and when I got home I found that there was an inch of water over the floor of our house,” Lian said. “I got renters insurance so it would be covered if it flooded again this year.”

“I am worried about the cliffs,” Apperson said. “I live on DP so I’m hoping we don’t get evacuated.”

A version of this story appeared on p. 11 of the Thursday, October 29 issue of the Daily Nexus.