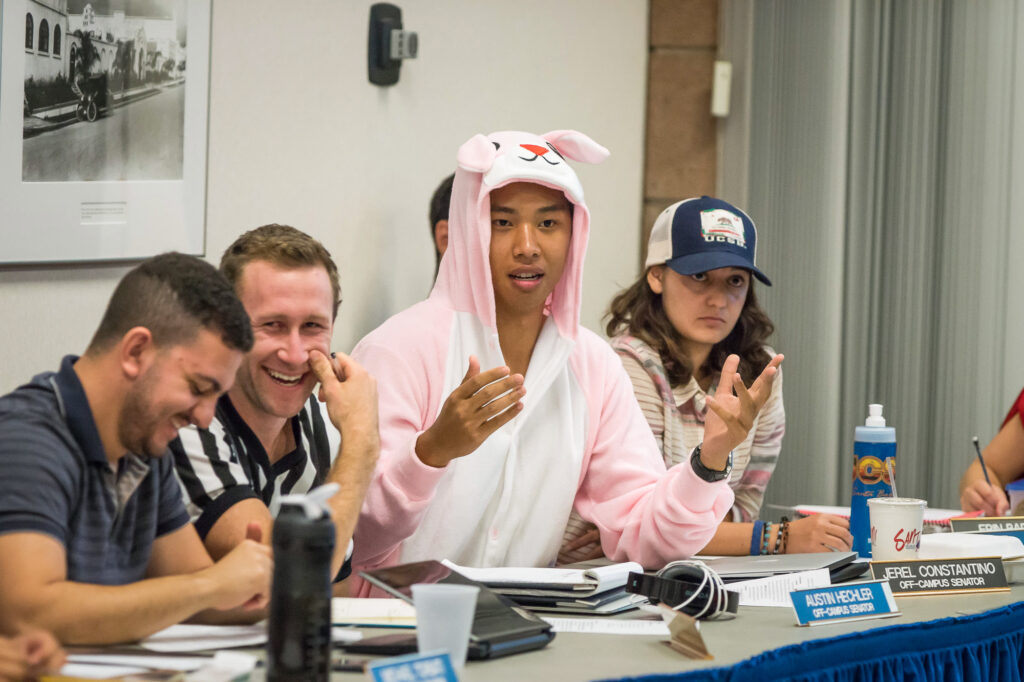 The Associated Students (A.S.) Senate met Wednesday night in the Flying A Room of the UCen to discuss A.S. President Jimmy Villarreal’s vetoes of two bills.

The bills, “A Bill to Establish A.S. Commissions for the CCS Student Council and CoE Student Council” and “A Bill to Redefine the A.S. Science, Technology, Aerospace and Research Kapital (S.T.A.R.K.) Fund,” passed unanimously at last week’s Senate meeting. Public Forum included multiple College of Creative Studies (CCS) students speaking in support of the bill to establish student government in CCS and the College of Engineering (CoE).

First-year CCS student Katie Feerst said CCS and CoE are underrepresented on campus, so she supports the bill to establish student government for the two colleges.

“CCS has existed since 1967. We have been in UCSB for a long time, yet we have yet to have a student council,” Feerst said. “We should all have representation, even if we are smaller than College of Letters and Sciences. We should all be able to integrate as part of UCSB.”

Villarreal said he vetoed the bill because the creation of a student government is a new concept in A.S., so legislation requires thorough editing before passing and becoming part of the A.S. Legal Code.

“Moving the association to a research-funding academic body — it very much changes what we do,” Villarreal said. “There’s an unnatural connection in what we do here and the educational side of things.”

“There weren’t substantial reasons why it was vetoed, and as senators we could always put forward bills to modify,” Larrazolo said. “The space needs to be created while the momentum is here, and while the entire student population is requesting it.”

Letters and Science collegiate senator and third-year psychology major Niki Elyasi said although A.S. Senate unanimously supports the bill, it should take the time to perfect the legal framework of creating a governmental entity.

“We realize the need for representation and for money for these students,” Elyasi said. “They are an underrepresented college. The issue is: where does that money come from and in what way is that money distributed?”

Off-campus senator and third-year political science major Isabelle Ninh said Senate should not have the power to regulate a student’s research if CCS and CoE governments are formed as A.S. commissions.

“I don’t want to say what you can or can’t do,” Ninh said. “We don’t have the understanding that CCS does. I doubt all of us can access the knowledge of what it is to be a CCS student.”

Off-campus senator and third-year political science major Louis Mariano said Senate reserves the right to overlook how money is spent, but should listen to the two colleges on how to spend grant money.

“They know how to spend the money better than we spend the money, so if they recommend that things should be spent on this grant, then yeah I would go with them,” Mariano said. “I don’t believe the senate should not strike minutes, since we are the overseers.

A version of this story appeared on p. 8 of the Thursday, October 29 issue of the Daily Nexus.