The Daily Nexus
Campus
Students Advocate for End of Rape Culture
October 29, 2015 at 5:11 am by Sonia May Htoon

With the Halloween weekend coming up, C.A.R.E. and Fuck Your Standards held the event #PledgeforConsent to condemn rape culture and prevent sexual assault 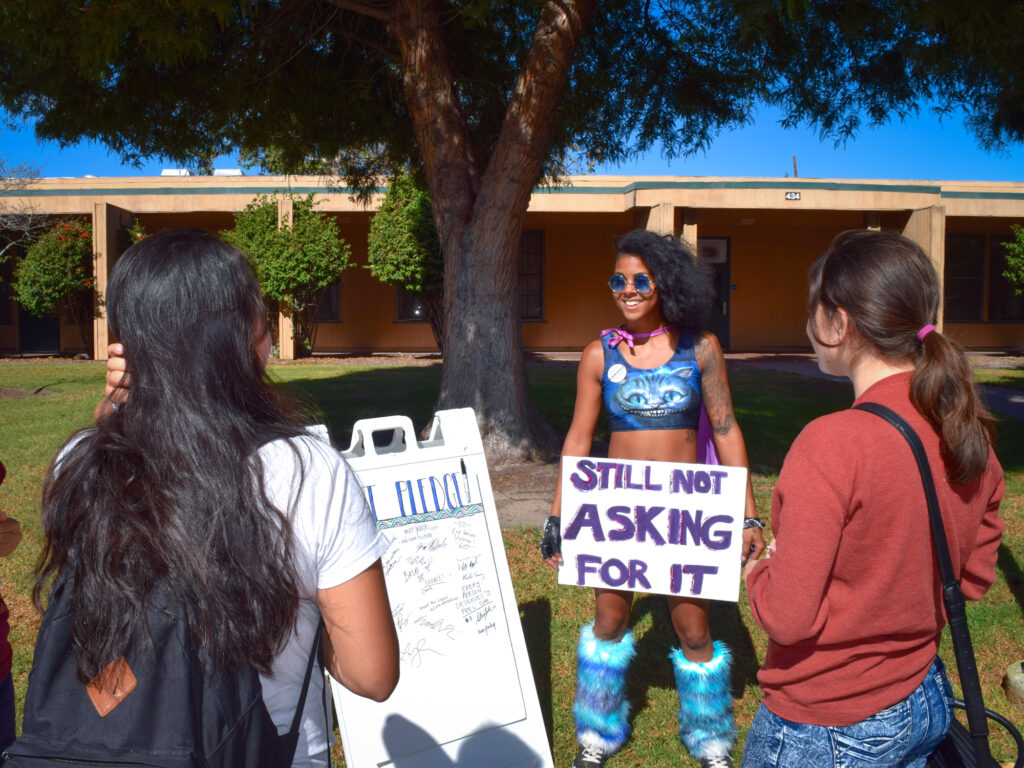 Rape culture is a philosophy that promotes rape and victim blaming. The event attempted to educate students on what constitutes rape culture. Effie Sklavenitis/Daily Nexus

UCSB Campus Advocacy Resources and Education (C.A.R.E.) and members from the Facebook group “Fuck Your Standards” co-hosted an event titled “#PledgeforConsent” at Storke Tower Wednesday, during which guest speakers spoke on bringing an end to “rape culture.”

The goal of the event was to facilitate conversation about the definitions of consent and rape. Demonstrators wore bright capes, colorful clothes and coin skirts while holding up signs advocating for consent. Event organizers gave out candy, pins and hugs to attendees. The demonstration aimed to address and prevent sexual assault during Isla Vista’s Halloween weekend.

According to “Fuck Your Standards” founder and third-year global studies major Gabby O’Neal rape culture is a philosophy that promotes rape and victim blaming.

“This causes mistrust by slut-shaming and oversexualizing women,” O’Neal said. “Consent culture is a culture which respects an affirmative yes … it gives respect to people and their own bodies.”

O’Neal said her goal is to educate people on which actions and phrases contribute to rape culture. 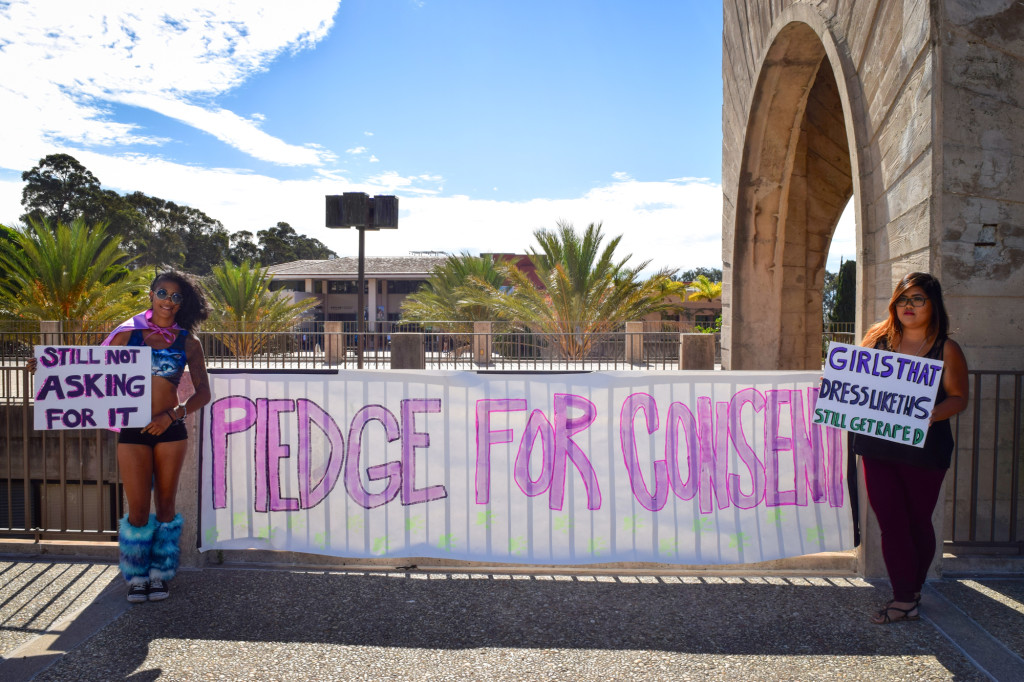 “I would like to see more people take responsibility for themselves and what they say,” O’Neal said. “Like calling people out when they make a joke about rape … these things aren’t okay.”

Alumna Reina Durian said it is important to help victims and to confront people who may be taking advantage of others.

“If you notice somebody is at risk for something, be a friend and step in and get them out of that situation,” Durian said. “Let the other person know, like, ‘Hey, you’re in the wrong,’ and hopefully they can snap out of it.”

According to Barnett, media has contributed to rape culture by promoting images and songs that oversexualize people.

“Rape culture has to be intolerable, but it’s the norm right now. Like in music, the way music hyper-sexualizes people, the way men feel entitled to women and to women’s bodies … Why is that okay?” Barnett said. “Why aren’t we talking about why people are raping.”

“It was definitely something that aligned with our office and the different things we are trying to combat, such as rape culture,” Meyers said.

Fuck Your Standards and the #PledgeforConsent event page on Facebook will be posting messages on consent and sexual assault to further educate students about rape culture.

Stop repeating, word for word, statements that you learned in class and start constructing your own thoughts.

“rape culture is a philosophy that promotes rape and victim blaming”? I’ve only taken a couple of philosophy classes, so I could be missing something, but I’ve never heard of this supposed pro-rape philosophy. I’ve never read an article entitled “In Defense of Rape” or seen a protester who wanted to legalize rape. Sexual assault is one of the most condemned crimes in our society. Yes, it unfortunately happens far more than it should, but by accusing this of being a “cultural” phenomenon I’m afraid these feminist groups are setting up a straw man and doing little to actually decease… Read more »

Shh don’t tell them that! They think they’re helping. Considering how mentally deficient most of them are, I think it’s important to let them blabber about nothing so that they remain harmless.

“Mentally deficient”?! Listen keyboard warrior, at least these women are standing up and speaking POSITIVELY. The only mentally deficient one here is the individual who results to name calling and degradation of these women. Additionally, they are promoting ‘Consent Culture’ which is to highlight how men but mostly women are seen as objects and there is a clear societal issue there. Regardless, if you are so passionate and opinionated about the topic, say something constructive…You know, like your Mother taught you…

“Promoting” aka cheering on people who are doing actual work. Except no one is doing the work because everyone is busy promoting. Call me when one of them has an actual plan and I’ll remove her Mentally Deficient Badge with my super white male powers.

I apologies James…I have a fragile ego and need to put people down to feel better. I will work on it.

Pretty lame actually. Infantile even, to masquerade as someone else in an attempt to defame them since you can’t actually counter their points directly in a meaningful way.

Yes you are James. Thank you for your positive words and helping me see my wrong doings. Now it is clear to me that these individuals were imply trying to raise awareness for an issue that is easily swept under the rug. They are brave souls and beautiful people like you and I :)

If more people were brave enough to stand outside holding a sign in an environment where everyone already agrees with them, the world would be a better place.

You want to improve the culture? How about setting an example for common courtesy?

“F*** Your Standards” is not the way to start a constructive conversation.

Rape culture is not just promoting rape. It is rape jokes, victim blaming, and not caring about enthusiastic consent. If you’ve ever said “I totally got raped by my midterm”, you have engaged in rape culture.

Thats the stupidest thing Ive ever heard.. please learn how to think for yourself Bekka!!!! MAking a joke like that IS NOT RAPE CULTURE!! its a joke!!

You kids act like babies.. I feel so sorry for you all.. think for yourself.. dont parrot this BS being thrown at you by yours teachers.. they have an agenda

Like I said in other forums… keep repeating lies.. Im sure your majors depend on it!! There is NO RAPE CULTURE period!! Just a bunch of entitled, spoon fed, children.. being lied to and consuming the latest fad on campus!!Ive seen some of the majors some of you are actually going to school for and its obvious that most of you will be struggling or homeless in 10 years.. or working at starbucks!!
Keep spreading lies.. Remember if you repeat a lie enough it eventually becomes a truth!!

Barmen in a popular Scottish-themed venue have had to abandon their kilts due to women lifting them up and even grabbing their penises. Staff at Hootananny in Inverness said the problem was particularly bad at weekends, when large groups of drunk women would ‘circle’ around staff. Owner Kit Fraser told the Inverness Courier that the attacks were ‘pure sexism’. Fraser said, ‘It may seem funny but it is serious, too – the women are sticking their hands up their kilts. ‘Can you imagine if I went into a restaurant and stuck my hand up a girl’s skirt? I would be… Read more »