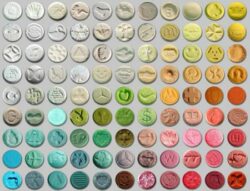 Methylenedioxyphenethylamine (MDMA), commonly known as “Ecstasy” or “Molly,” is one of the most popular recreational tablets that has been hitting the dance and party scene for years. Ecstasy is usually sold in the forms of pills that come in colors and logos, depending on the producer or provider, and has gained a deceiving reputation as being one of the safer drugs on the market. The “club drug” continues to be used by millions of Americans, especially young adults, despite the known truth of the actual harmful effects that could occur.

Decoding the myths of MDMA and the effects has to be the first step in the solution of breaking the glamorized image of usage. Since MDMA provides a positive immediate experience of emotional warmth, a heightened energy level and even a euphoric sense of feelings, there is a deadly dose of mistruth about the genuine effects. The primary actuality about MDMA pills or tablets is that most are not even made of pure “ecstasy.” The dangerous concoction compacted together ranges from PMA (similar to MDMA but more lethal in smaller doses), rat poison and a plethora of other chemicals not associated with the drug itself. As reported by ecstasydata.org, a website that allows access to lab testing results for the tablets, in 2015, only 31 percent of pills tested were pure MDMA.

The health risks of using anything sold claiming to be MDMA entirely depends on what is compacted together. Since there is no way of telling what is actually in “ecstasy” until the user has already swallowed it, the unpredictability adds to the risk of the drug. There are a few generalized harmful effects that are similar in some users. The first deadly effect is that once someone has “popped a molly [and starts] sweatin,’” as rapped by Trinidad James, their body temperature spikes. According to drugabuse.gov, while combined with vigorous physical activity [raving, dancing, etc.], the rise in body temperature is considered “hyperthermia,” which can “rapidly lead to muscle breakdown” that can continue to “kidney failure.”

Another risk is that MDMA quickly enters the bloodstream and prevents the body from being able to break down the drug. So, taking another tablet without allowing a significant amount of time, MDMA could produce high blood pressure levels and heighten all effects of the drugs mixed within. Nearly all the effects, blended together with long term usage, ultimately lead to death of the individual. There could also be long-lasting confusion, depression and even decreased interest in sex. All of which an individual clearly would not wish to experience.