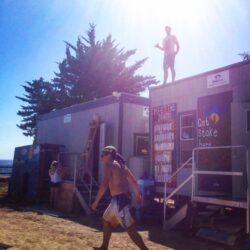 If you’ve ever decided to grab a (insert your watercraft of choice) and paddle out at Sands Beach off Isla Vista, you may have noticed something unique that doesn’t exist on most other California beaches. Can you guess what it is? I’m not talking about that sticky black tar on your feet or all those UCSB surf nuts tearing the waves to shreds — many of whom made their college decisions based almost entirely on proximity to the ocean (like me).

I’m also not referring to those stupid cruiser bikes with massive handlebars that are always blocking at least two other spaces on the bike racks — I’ll save that rant for another article — and I’m not talking about that epic little log-bench on the cliff that nobody ever seems to notice. No, I’m talking about the Germans. The always-smiling, permastoked Germans riding big, foamy surfboards into aquatic battle against King Poseidon’s wave-warriors as they make their California dream a reality — a reality provided in full by the notorious Excursion Club.

The Excursion Club is arguably one of the largest and most well-known clubs at UCSB, having attained something of a legendary status among foreign exchange students in particular. By providing students with countless opportunities for outdoor adventures and gear rentals at an unbeatably low cost, the Excursion Club has been fulfilling I.V.’s stoke addiction since the club’s foundation in 2003. What is “stoke,” you ask? Well, there’s really no easy way to describe the Excursion Club without this term, so let’s break it down:

Stoked: is to be completely and intensely enthusiastic or excited about something. Those who are stoked all of the time know this; being stoked is the epitome of all being. (Urban Dictionary)

Ex: “When Billy got a shiny new bike for Christmas, he was stoked.”

So yes, we all know that the Excursion Club prides itself on being “the most stoked club on campus.” Now let me tell you something you probably didn’t know. Formerly criticized by some for being a loosely-run organization in which students drink exsessive amounts of alcohol in nature, the Excursion Club has taken a new, more professional direction in recent years. In the words of Excursion’s president Dillon Cole, “Excursion Club began in 2003 to do what we still do today, which is get people outside. It has changed from formerly being known for partying to eliminating that aspect of the club and collaborating more with the community.” Excursion Club has been collaborating indeed, and in the process they have significantly changed their image in the eyes of the community.
Did you by chance attend a “First Friday” event in Isla Vista or the increasingly popular “Meet Your Neighbor Day” at People’s Park? Have you ever woken up late on a Saturday morning and seen students whizzing by your house on skateboards, picking up all that trash left from Friday night’s carnage? Did you by chance see an enormous group of people paddling out at SB Channelkeeper’s S.P.L.A.S.H. event at Devereux Beach, which celebrated the successful restoration of Isla Vista’s marine ecosystem? Perhaps you saw some people last weekend who were kayaking in the little pond behind Embarcadero Hall, doing some hard yard work and cutting overgrown reeds? The Excursion Club was involved in each of these things … and that’s only to name a few! Working often in conjunction with organizations like the I.V.

Recreation and Park District (IVRPD) and the Los Padres Forest Association, Excursion Club’s staff members have taken a leading role in serving the local community, from simply picking up trash in I.V. to repairing damaged trails in the San Ynez mountains to providing Halloween weekend trips for people trying to avoid the chaos. Therefore, it can be reasonably ascertained that anyone who still thinks the Excursion Club is just about rowdy college students blacking out in nature simply have not done their research. 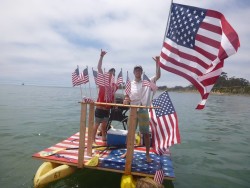 Despite the fact that Excursion Club doesn’t throw huge public parties anymore, it still remains true to its roots by showing its members a really good time — outside of course! Excursion Club currently has its own trailer park on the 67 block of Del Playa where all of its outdoor gear is located and where Excursion staff members regularly hold “office hours” during the week. For the same price as a Netflix membership, you can join the Excursion Club for an entire year and get unlimited access to their outdoor gear (such as surfboards, kayaks, rock climbing shoes, ice axes etc.). This fee does not pay anyone’s salary; it goes entirely to purchasing new club gear and keeping the Excursion Park operational. Excursion Club members gain access to multiple “trips” that happen every single day of every week, which are led by roughly 60 Excursion staff members. Trips can consist of anything from free surf lessons to paintballing to Big Sur backpacking trips to going “pirate sailing” in Santa Barbara Harbor. Despite Excursion Club’s rising “professionalism,” their timeless mottos of “leave no trace, only memories” and “we do it outdoors” still resonate strongly. Excursion Club is definitely not lacking in the fun department.

So if you need to cross some fun outdoor activities off your bucket list and are interested in serving the local community, Excursion Club may be perfect for you. If you’re already a member looking to gain leadership experience and meet like-minded people in the process, then you may want to consider applying for Excursion Staff. I write this article not because I am clearly biased as an Excursion staff member but because I am very proud of the hard work that I see my peers putting into this organization, working tirelessly to give fellow students opportunities to get outside and develop new hobbies. I am also very glad to see the positive direction that Excursion Club has taken in light of all these community service events and the ongoing partnership with the IVRPD. So if the time ever comes when you just can’t find that new Netflix show to binge on, remember that there’s an even better alternative just around the corner. May the stoke be with you!

Since joining Excursion Club, Nik Frey has noticed a significant improvement in his zombie-fighting skills.