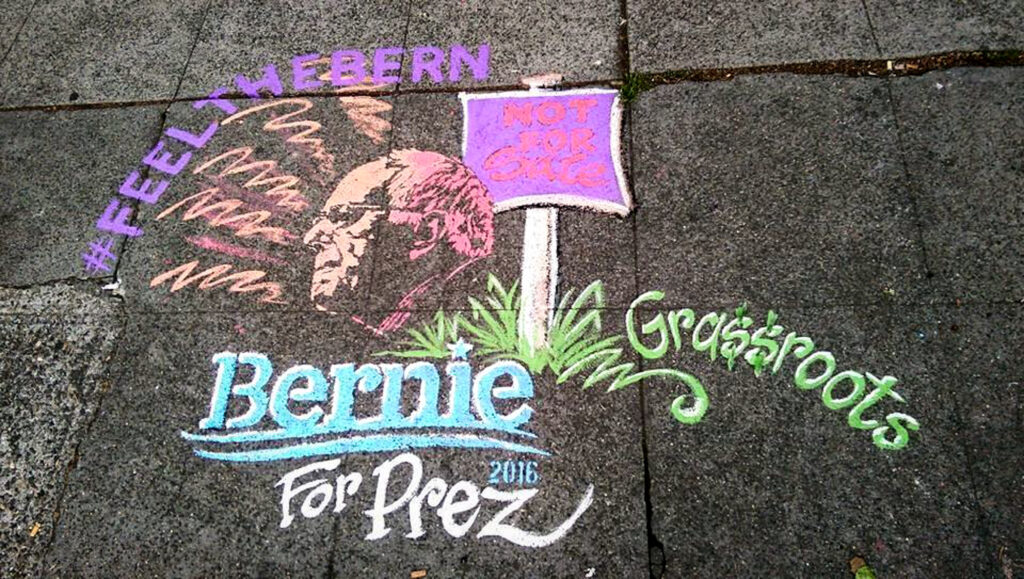 The goal of the event is to cover I.V. streets and sidewalks with slogans and pictures of Sanders to bring attention to his campaign. As of Oct. 27, the event’s Facebook page shows 243 people plan to attend. UCSB-4-Bernie strategically planned the event two days before Halloween to take advantage of the large crowds over the holiday weekend and maximize views of the chalk.

Third-year religious studies major Eric Daniel Villalobos said he helped plan the event and UCSB students who support Sanders plan to chalk phrases and questions relevant to Sanders’ campaign, such as, “Are the banks too big?”

“We’re going to be chalking — along with pictures and slogans — questions like, ‘Is education a right or only for a privileged few?’” Villalobos said. “Hopefully, all the people walking through I.V. during the weekend will stop and notice.”

According to Villalobos, the aim of the event is to build support for Sanders at UCSB and in I.V. and to encourage young people to engage in politics.

“We want [to] build on the energy we see here for Bernie’s message and campaign,” Villalobos said. “We want all the supporters here to get energized, to get involved and be active participants in the political process.”

Villalobos said all students are welcome to participate in the event.

“All they have to do is show up,” Villalobos said. “In terms of the event, if they want to bring their own chalk, they’re more than welcome to.”

Villalobos also said he believes college students are supportive of Sanders because of his stance on topics like college tuition and various social issues.

“Fighting for free public education doesn’t hurt your standing with college students,” Villalobos said. “He seems to have always been on the right side of history. He got arrested for holding anti-segregation rallies, he marched with MLK, he endorsed marriage equality decades before it became politically expedient to do so.”

First-year communication major Nicole Truong said the event allows people to get to know other individuals who share their beliefs and ideas.

“I’m looking forward to seeing people at the event who share the same views as me, and I’m interested in meeting new people and hearing their thoughts and opinions,” Truong said in an email.

“I’m looking forward to meeting fellow Bernie supporters and getting new perspectives from others on issues that surround the presidential election,” Jiang said.

“What really stuck out to me about Bernie’s campaign and what I hope people will learn about the most is that you can always make a change if you’re dedicated enough to your cause,” Jiang said.

First-year sociology major Logan Clement said the public should better understand Bernie Sanders’ stance of “democratic socialism,” which is defined as a specific type of socialism which supports public ownership of the production of goods paired with a democratic political system.

“I like that [Sanders] is pushing for affordable health care and education. I also wish more people understood what Sanders means by ‘democratic socialism’ rather than using that language to disengage from his message,” Clement said in an email. “He’s also one of the most outspoken advocates of racial justice.”

When we’re several trillion dollars in debt, it seems very hard indeed to think of who exactly will foot the bill for “free college,” among other promises of “free” stuff. Also, here’s a good start to making colleges cheaper: eliminate all of the ‘diversity,’ ‘multiculturalism,’ ‘LGBT’ (etc.) bureaucracies that do nothing but invent [insert term here]-phobia boogeymen that they then try to ‘address’ (but which they can, of course, never fully ‘eliminate’) all the while the administrators in charge of the office gets a 6-figure paycheck from tax payers for doing nothing except being a professional useless person who peddles… Read more »

b
Reply to  Carlos Flores

I agree, diversity sucks. Can we get rid of the Catholics first?

Carlos Flores
Reply to  b

Typical response. No substantive rebuttal, no addressing the points made. Just emoting. Grow up, fellow Gauchos.

b
Reply to  Carlos Flores

Back up your “points” with some facts and we’ll talk.

I love that the guy telling people to grow up calls people more names than a fifth-grade bully. The fact is, Flores, all you do is advocate hatred. You are this boogeyman of which you complain. And if you want a rebuttal, here it is: people are more supportive of groups that advocate acceptance (LBQT) than groups that advocate the opposite (the Anscombe Society). Also, if you don’t like professors who peddle “leftist nonsense” then you can always drop whatever class you happen to be in with said professor. Or you could transfer to a trade school, because I hate… Read more »

They were saying get rid of all those groups. Anscombe society included.

I see that you are having trouble with reading comprehension, Dylan. In my original comment I said that the ‘diversity,’ ‘multiculturalism,’ ‘LGBTQABC…’, etc. *bureaucracies* should be eliminated as they exist to address a problem that doesn’t exist in the first place (all of the “phobia” boogeymen) and because their administrators receive 6-figure salaries for being professional useless people. Getting rid of these bureaucracies will significantly reduce tuition as we would cease to pay extravagant sums of money to college administrators to “promote diversity” (whatever that means in the first place) and other leftist nonsense (you would have known this had… Read more »

b
Reply to  Dylan Aleshire

I actually agree with you about the administrators, Carlos. We don’t need multiple people making 6 figures who do nothing but handle diversity issues. Can you please give me their names and salaries so that I can file a formal complaint?

Right now our minority groups need more help… we’re only as strong as our weakest link and all that right? And since America will continue to get browner, Helping them now is pretty much an investment in the future. It’s important to look long term… Being a shortsighted person is dumb.

Oho, this is funny.

Thanks for proving my point, Flores. Now you know why nobody wants to debate with you: they try and you pretty much reply, “You’re a stupid poopy head!”

And now for something completely different: cool to see so many people invested in Bernie’s campaign. I don’t think he’ll win the Democrat nomination, but it’s cool to see a politician in tune with the ideals of the youth.