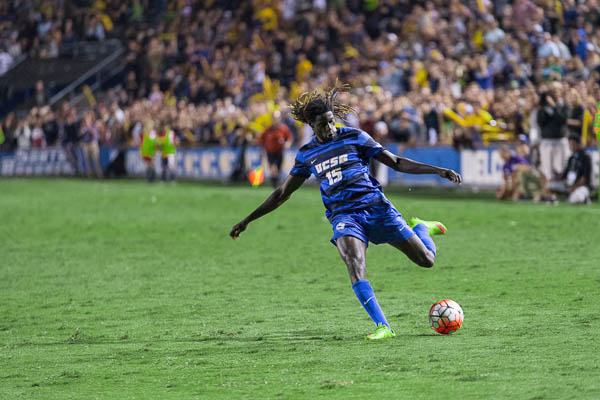 Ismaila Jome passes the ball in towards the box. Eric Swenson/Daily Nexus

The No. 18 UCSB men’s soccer team plays its regular season home finale tonight against Sacramento St. as it looks to maintain its slim lead over No. 22 Cal Poly atop the Big West North Division. The Gauchos suffered an embarrassing 5-2 loss to the Hornets the last time the two teams played earlier this month.

“At some point, hopefully sooner rather than later, we’ll figure out how to be good and finish off a game,” Head Coach Tim Vom Steeg said. “Today we’ve got payback, so our guys should be excited about that.”

With just two games remaining, Santa Barbara possesses the Big West’s best record at 10-5-2 overall and 5-2-1 in conference. The Hornets, who qualified for the Big West Tournament for the first time in 2014, are currently in last place in the North at 6-8-2 overall, 3-4-1 conference. They trail UC Davis by just one point for the final playoff spot.

The Gauchos are coming off perhaps the most disappointing undefeated week in program history. After a sluggish, frustrating 2-1 win over UC Davis last Wednesday, UCSB let a 2-0 lead slip away against Cal Poly on Saturday, conceding a game-tying goal with just four seconds left to go. The game ended in a 2-2 tie after two overtimes.

A win would have given the Gauchos complete control in the standings, but they are still just a point ahead of the Mustangs for the No. 1 seed and home-field advantage in the postseason.

“The result’s disappointing,” Vom Steeg said. “It doesn’t change what we have to do. Everything’s still out in front of us, but it’s still disappointing because it’s four seconds left to win a game.”

When UCSB traveled to Sac St. two weeks ago riding a five-game win streak, the Hornets shocked the nation, pulling off a dominant upset. After Santa Barbara trailed 2-0 heading into the half, a red card to defender Sam Strong in the 61st minute made matters much worse, and Sac St. punished its helpless opponent to the tune of five goals, the most the team has scored against a Division I opponent since 2010.

Redshirt freshman Brad Bumgarner was a key player in the 5-2 win, picking up both an assist and a goal within the first 34 minutes. He leads Sac St. with six goals, 13 points and three game-winners.

For the Gauchos, the 2-2 tie against Cal Poly marked the end of a three-game scoring drought for junior Nick DePuy. The 6-4 forward leads the Big West with 13 goals – six more than any other player – and seven game-winners.

DePuy has benefited from having a number of attacking options in support this year. Freshman forward Geoffrey Acheampong hooked up with sophomore forward Ahinga Selemani on Saturday for his eighth assist of the season, also a conference-best. Selemani put away his fourth goal, the second most on the team, ending a seven-game scoring drought.

Defensively, neither team has been particularly stellar since the beginning of the conference season. UCSB ranks sixth in the Big West with a 1.63 goals against average while Sac St. comes in just behind at seventh, giving up 1.70 goals per game in conference play.

While the Hornets defense is not going to have an easy time going up against the Big West’s top offense playing on its home turf, they will have their best chance of keeping the score low with goalkeeper James Del Curto playing in goal. The sophomore ranks 22nd in the nation with 4.75 saves per game, while he comes in at No. 2 in the Big West with a .760 save percentage.

Scoring opportunities might be in abundance for the Gauchos tonight, but they’ll have to put away their chances if they are going to be able to pick up a win in their final home game of the season.

UCSB and Sac St. will kickoff at 7 p.m. tonight at Harder Stadium.