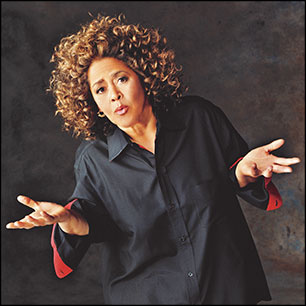 There is rarely a performance so powerful and so genuine that within the audience, the dim stage light shows streaming tears all around, both from laughter and sorrow. Anna Deveare Smith’s Never Givin’ Up was one such performance.

Smith brought her one-woman show to Campbell Hall on Sunday, Oct. 18, engaging the audience from the first moment as she informally and personally spoke about the interviews she would be sharing. Her collection of monologues and her reading of Martin Luther King Jr.’s “Letter From a Birmingham Jail” were rich with true experiences of prejudice, violence, and personal struggles within the African American community.

Anna Deveare Smith’s monologues were passionate and vivacious not only because they provided looks at very different characters, but also because they came from interviews that Smith herself conducted. Her attention to detail was meticulous, as seen in her piece titled “Glass All Over My Clothes,” in which she sat very casually with her legs crossed, occasionally sipping from a bowl of soup to emulate the character’s casual demeanor. She spoke with a mixture of quick enthusiasm and slow consideration, as though trying to remember every detail of the story, sometimes even stuttering and correcting herself to simulate the spontaneous feel of the interview.

In her monologue “Just One Kid,” she simultaneously played to the humor and the solemn nature of a high school principal, beginning with a jarring countdown for kids to get to class in a raspy yet powerful voice. Her lively energy was present in her voice and her movements as she threw up her hands when excited, yelling and shouting to express her frustration at her students.

The audience’s laughter quickly turned to calls of approval and applause as she spoke about the serious racial and economic issues that prevent kids from getting an education, her voice lowering in earnest and her eyes glistening with sad longing. Malachi Allen, a second-year BFA student who saw the performance, explained, “The monologue about the principal spoke to me in a way that none of the other ones could. It was something that was hard for me to hear because I know so many people who go through situations like that where they can’t get an education.”

In between monologues, Robert McDuffie and Anne Epperson performed solemn musical pieces on the violin and piano, serving as moments of reflection and introspection after the intense moments. McDuffie’s long sweeping notes on the violin perfectly accompanied Epperson’s dark piano chords to create a dynamic sound that reflected the highs and lows of the interviews themselves.

A centerpiece of Smith’s performance was her dramatic reading of Martin Luther King Jr.’s “Letter From a Birmingham Jail,” in which she brought King’s words to life through a strong, earnest voice and various points of emotional emphasis. She emulated King’s writing process, looking into the distance as she spoke slowly and occasionally writing on a piece of paper in front of her. She built the words to a climax, beginning very diplomatic and calm with a level voice, and then slowly beginning to speak with more volume and frustration in her tone. Her booming voice filled the theatre as she lamented the injustice against African Americans.

Smith brought the audience to tears as her voice suddenly became soft and her face twisted up in pain. Sudeep Dhanoa, another student who attended the show, expressed that Smith’s reading was one of the show’s most powerful moments, as he stated, “Her performance of the ‘Letter at Birmingham Jail’ was long but she gripped my attention the entire time. It was the most moving piece. And it made me cry so it definitely moved me.”

Anna Deavere Smith’s Never Givin’ Up was a compelling mix of intense character study, dynamic music, and important issues that still affect the world today. Her moments of uplifting humor and intense sorrow conveyed the wide range of emotions felt by those who have experienced prejudice, and her unique performance style was authentic and detailed. Smith’s show demonstrated that sometimes the most powerful things can simply be the stories we share with others.