The Daily Nexus
News
Yoga Studio Opens in Isla Vista
October 26, 2015 at 12:20 am by Madison Willard 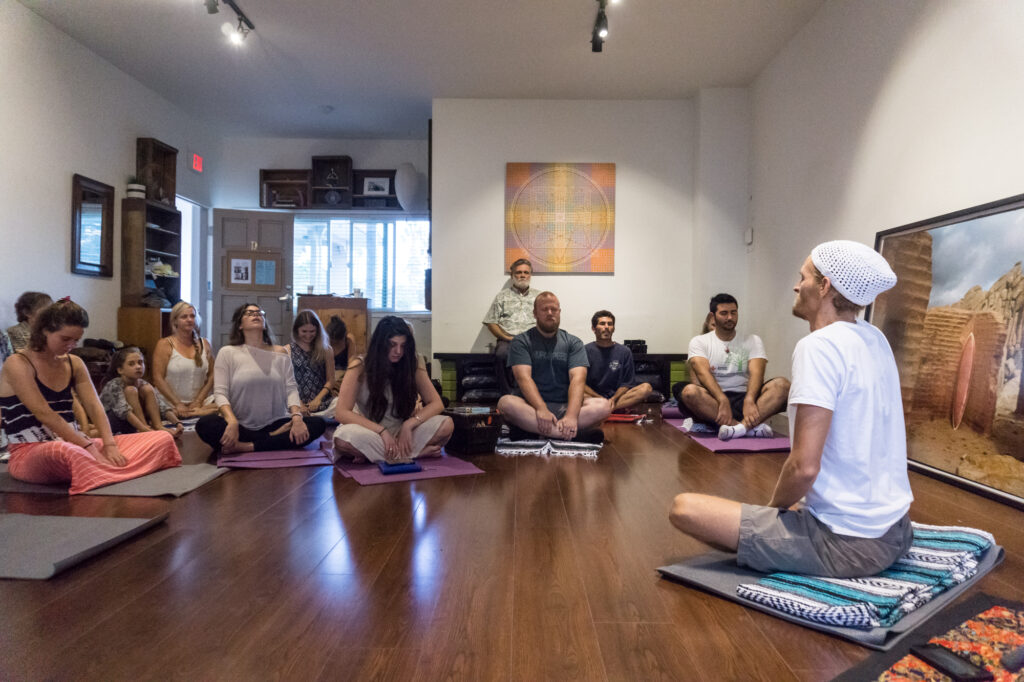 Yoga Isla Vista offers classes in Vinyasa, Sivananda, Kundalini, Yin and several other yoga styles. The grand opening included a demonstration of a Kundalini yoga class for attendees and performances by Sukhdev Jackson of the musical group Aykanna and local singer and songwriter Gabriel Kelly.

Santa Barbara resident and Yin Yoga instructor at Yoga Isla Vista Dolliane Lipman said the studio will offer an opportunity for I.V. residents to participate in a neighborhood activity.

“It’s a really great idea to have a yoga community in Isla Vista, just somewhere people can come and … heal, because there’s a lot of negative stuff that’s happened here,” Lipman said.

Yoga instructor at Yoga Isla Vista Peter Stephan said many of the instructors connect deeply to Kundalini yoga, a tradition Yogi Bhajan brought to the west in 1968. According to Stephan, Kundalini yoga focuses on conscious experience.

“Kundalini is the yoga of awareness, there’s a real emphasis on the community… and it incorporates all the other styles of yoga,” Stephan said. “Kundalini is all about the direct, personal experience.”
Stephan said he encourages students and I.V. residents to try yoga even if they are unsure about the activity.

“My advice would be to show up and experience the technology. It’s a science because there are steps that, if taken, give guaranteed results. It’s simply about taking those steps,” Stephan said. “This science can help us dissolve the illusion of who we think we are.”

Smart, who graduated from UCSB in 2003, said he began yoga to seek relief from a hectic career in the film industry.

“My first passion in life was surfing, I was a semi-professional/professional surfer. And when I went off into the real world to get a job in the film industry… I wasn’t getting the same physical activity that I got through surfing,” Smart said. “So I first came to yoga to help me deal with working 12, 14, 18-hour days. It was the most strenuous job I could have dreamed of.”

Smart said yoga helped bring calm to his life and inspired him to open his own studio.

“That was a lot of stress for the body, mind, and spirit. So, trying to finding a balance there, I just had to have a personal practice,” Smart said. “That’s how I found yoga and a daily practice, to counterbalance that chaos,” Smart said.

Smart said while he and the instructors have roots in Kundalini yoga, Yoga Isla Vista will offer many styles of yoga to best serve each individual.

“We’re not just doing Kundalini, we’re doing all different types, because we believe that everybody has a different path. We just want to offer authentic forms of yoga; we’re not a corporate yoga, it’s not a gym workout,” Smart said. “We’re just offering a slice of different traditions, so the community and students within it can be exposed to it and gravitate towards whatever tradition they like.”

According to Smart, Kundalini yoga helps individuals attain a flowing mindset rather than a fixed one, and encourages people to follow their intuitions.

“To me, we can approach life in two ways. One is, ‘my way or the highway.’ The other is to surrender to the flow and that natural, tiny voice that’s saying ‘go this way, don’t go that way,’” Smart said. “That’s the voice we’re trying to listen to, that passionate, energetic guide.”

Smart said his goal is to share the yogic tradition rather than control it, and encourages campus clubs to continue their activities.

“We’re not here to monopolize yoga; that’s totally against the tradition. The idea is that it spreads,” Smart said.

Smart said he hopes the studio will impact I.V. in a positive, life-changing way.

“The whole purpose was to give this community and college kids the tools they need for life … and there’s certain things that aren’t taught in school, unfortunately,” Smart said. “So that they have it in their tool kit, so they can live happier, healthier, holier lives — ‘holy’ meaning kind, loving, compassionate, realizing you’re part of a bigger whole and you’re grateful for that.”

First-year financial mathematics and statistics major Caroline Cubero said yoga is a source of tranquility for her during stressful times, and the she wants to look into taking classes at the studio.

“I did yoga over the summer, and it really calms me down. It helps me get all of my stress out and I feel so much better at the end of the day. Especially if I’m having a really bad day, it helps to reduce my stress. I definitely want to check it out,” Cubero said.

Kundalini Yoga student Cy Cascade said setting aside inhibitions with an open mind is the first step to benefiting from yoga.

“When you first come to class, you’re gonna be greeted by your teacher, who probably doesn’t look like a typical yoga teacher in the spandex or yoga pants,” Cascade said. “You have to let go of your preconceived notions that ‘this is weird’…you have to get past yourself. Which opens you up to being available to experience the amazing rewards.”