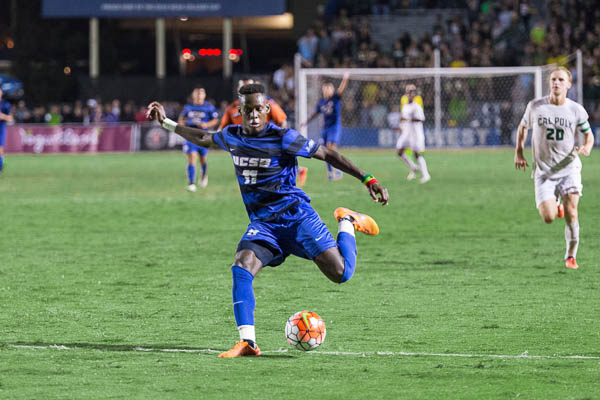 This past Saturday, the Blue-Green rivalry between the No. 18 UCSB men’s soccer team and No. 22 Cal Poly delivered an absolute classic in front of nearly 15,000 fans in attendance and thousands more viewers on Fox Sports Prime Ticket. Unfortunately for the Gauchos, a 2-0 first half lead was not enough to avenge a 3-2 loss to the Mustangs seven days prior, as the road side was able to find an equalizer with just four seconds left in regulation to send the game to an eventual 2-2 tie.

Despite the result, UCSB still remains in first place in the Big West North at 10-5-2 overall and 5-2-1 in conference. Cal Poly continues to linger just a point out of first with a record of 9-3-4 overall, 4-1-3 Big West.

“We were four seconds from winning the game, so obviously, it’s a disappointed locker room,” Head Coach Tim Vom Steeg said. “We played a good first half, we got the two goals, I thought our defense was the best they’ve been all year. The frustration is that when you do a lot of the right things, hopefully the guys are rewarded at the end of the day.”

The 14,919 members in the audience now take over last year’s Blue-Green game for the second largest campus crowd in NCAA history. Since 1980, 13 of the 19 largest crowds have been UCSB-Cal Poly matchups, with the largest ever (15,896) being when UCSB hosted UCLA back in 2010.

The final seconds of regulation seemed to move in slow motion as the Gaucho faithful waited patiently for the clock to reach zero. With time running out, Cal Poly’s senior defender Kip Colvey sent in a cross towards the far post where senior forward Matt Lagrassa, who had been winning headers all night, rose above a UCSB defender to place a shot on goal, forcing freshman goalkeeper Justin Vom Steeg to make a remarkable one-handed save.

“I could tell [Lagrassa] was going to head it to the far side. The ground is a little sloppy on that side of the field so I lost my footing a little bit but I was fortunate to get a hand out,” the younger Vom Steeg said. “To be honest I thought I should’ve done a little better with it, but with plays like that it happens pretty quickly, and when you have the ball bouncing around the six-yard box, you usually get punished.”

The ball eventually fell to freshman forward Jared Pressley right inside the six-yard box, who scored a goal that will be remembered for years to come into the open net. It was just the second goal of his career.

“We’ve made this repeated mistake when balls get played into the box where we get stuck watching while the attacking player just keeps going forward,” Vom Steeg said. “That back post head ball is probably where [sophomore forward Kevin Feucht] would’ve been. It’s unfortunate because it takes away from a really good effort all night.”

The Gauchos dominated the game from the outset, looking comfortable playing in the spotlight of a much-hyped, televised game between two teams widely accepted to have the greatest rivalry in college soccer. It took little more than 10 minutes for them to open the scoring, as freshman forward Geoffrey Acheampong pounced on a loose ball in the attacking third to set up for the cross.

After not scoring in seven consecutive games, sophomore forward Ahinga Selemani was found making a near post run to tap it in with his favored left foot, giving UCSB the early advantage.

With fatigue and injuries forcing Vom Steeg to utilize his bench early and often, he was rewarded in the 43rd minute when freshman forward Cody Gibson played it in from the right wing to find a sky-high Nick DePuy. The junior forward outjumped his defender, placing a perfect header towards the far post and past Cal Poly senior goalkeeper Wade Hamilton to give UCSB a huge 2-0 advantage heading into halftime.

“Physically, they could just not stay with [our forwards]. That’s where the gameplan was,” Vom Steeg said. “I asked Ahinga to start making his near post run, he hasn’t made it in the last five games. He made the run, and we got two good services.”

The goal was DePuy’s Big West-leading 13th of the season.

Things changed in the second half with the Gauchos facing the dilemma of sitting back or going for a third goal to put the game away. With Cal Poly sending men forward for the remainder of the game, UCSB eventually got punished on the break.

In the 73rd minute, junior defender Jack O’Connor was all by himself down the left side, sending in a cross towards an unmarked Chase Minter in the box. The senior forward/midfielder put away a solid strike, giving him his fifth goal of the year and cutting the deficit in half.

“We all know that Minter is a very good player. We all know that we need to not get beat out wide,” Vom Steeg said. “We’ve spent the last two weeks working on finding men in the box, and if you’re going to leave anyone open, don’t leave their best player, that’s a pretty simple rule. We didn’t find him and it was a good finish.”

From there, two overtime periods yielded few chances before a final corner kick by Acheampong hit the post as time expired. The result was the second consecutive 2-2 tie between the two teams at Harder Stadium.

“A lot of positive things that our team did tonight. Again, I feel bad for the players to be not going home tonight having won the game,” Vom Steeg said. “We are in first place and that is a top-20 RPI team, so we didn’t do anything bad tonight, but that’s going in my fourth column of games that we left out there this season. Hopefully we’ll learn and be here in a playoff situation saying we figured out with ten seconds left how to clear a ball.”

It’s never fun to dwell on what-if scenarios, but had the Gauchos not lost Feucht, their best holding midfielder, to a suspension on yellow card accumulation, they may have been able to hold on in a game like this. In the German’s place, senior right back Duncan Backus, who Vom Steeg named the man of the match, stepped in to do a phenomenal job in an unfamiliar center defensive midfielder role.

“I’m just happy that the coaches put the trust in me to play a position,” Backus said. “The main thing was just defend, work hard, connect my passes and get the ball to the dangerous guys that can go do damage. I just made sure that we aren’t missing Kevin too much.”

If these two teams play each other again in the Big West Tournament, we can expect an even crazier atmosphere than the ones we’ve witnessed in the past two weeks.

Next up for the Gauchos is a rematch against Sacramento St. on Wednesday at home.