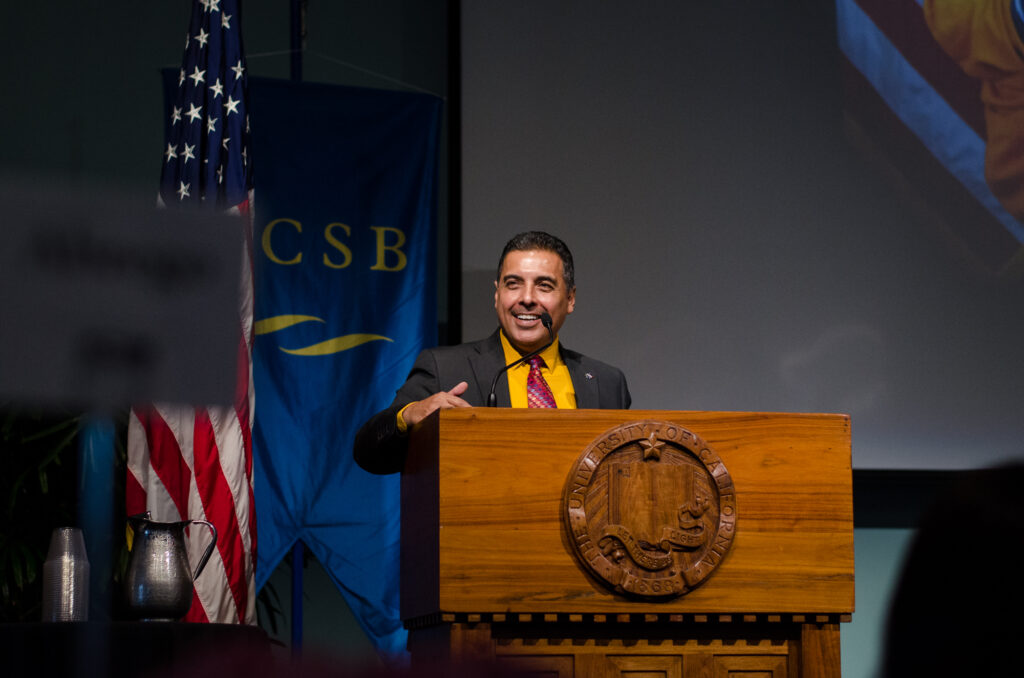 UC Santa Barbara’s 2015 Distinguished Alumnus and former NASA astronaut José Hernández was honored Saturday during the Dream Luncheon for his career and support for youth S.T.E.M. education in the Stockton, California area.

Hernández earned a master’s degree in electrical and computer engineering from UCSB in 1986 before joining NASA, and in 2008 he was a mission specialist aboard space shuttle Discovery as part of Mission STS-128. Hernández spoke on the challenges of pursing a prestigious career as an immigrant and first-generation student. The luncheon raised $9,000 for the Dream Scholar Fund at UCSB, established in 2013 to aid undocumented students who come from low-income backgrounds.

Hernández said he urges young people to “dream big” when choosing a career to pursue.

“We have these great programs at UCSB, but really it falls on the individual to achieve their dream,” Hernández said. “You have to say, ‘I am gonna do it.’ I was rejected 11 times to NASA’s astronaut training program before I was accepted.”

Hernández, who grew up in California as an immigrant, said his second grade teacher convinced his parents to remain in Stockton, California so he and his siblings could receive a stable education.

“She was able to convince my parents that the nomadic lifestyle our family was living was hindering their kids’ educations,” Hernández said. “From that point on, we, for the most part, stayed in Stockton, and that helped me succeed in school and eventually reach college.”

Hernández said he knew he wanted to become an astronaut in 1972 when he saw Apollo 17 on the news.

“I still remember newscaster Walter Cronkite narrating the Apollo 17 mission,” Hernández said. “I was just mesmerized by astronaut Gene Cernan walking on the surface of the moon. At the moment, I was like, ‘this is what I want to be.’”

Congressman from California’s 29th district and UCSB alumnus Antonio Cárdenas, who was studying electrical engineering as an undergraduate while Hernández was earning his master’s degree, also spoke at the event. Cárdenas said he and Hernández were “buddies” during their shared time at UCSB.

“I looked up to him back then because at that time, and unfortunately still today, there were very few Latinos who were in grad school,” Cárdenas said. “To me, he is an inspiration because he went a step further with his education and his education ultimately helped prove to everybody that the sky is not the limit; he became an astronaut.”

“My parents were also fieldworkers. They worked on dairy farms and also as gardeners,” Villalobos said. “To see someone who was able to graduate and myself, who is just about to graduate — it was inspiring to know there are opportunities after graduation to make an impact in the world.”