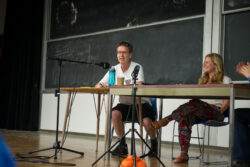 On the weekend of Oct. 9 System Change Not Climate Change hosted the “Building 21st Century Ecosocialism” conference at UCSB. People interested in ecosocialism, a movement dedicated to achieving a just society and a sustainable planet through democratic participation, came from across the state and Vancouver to share our organizing experiences, local struggles and discuss ways to build an ecosocialist movement.

For a glimpse of the spirit of this gathering, see the video, or read the Nexus article, “UCSB Hosts Ecosocialism Conference in Girvetz” by Christopher Chen, who attended the events and interviewed some of the organizers.

In another Nexus article titled “The Ecosocialism Parasite,” author Jason Garshfield, who was not present, not only makes many baseless remarks, but also conflates communism with socialism and ecosocialism. Ecosocialism is not an attempt to piggyback and steal the momentum of the global movement aimed at mitigating climate change in order to push a “red” agenda. Rather, ecosocialism aims for an economic system based on human need and the reduction of the gross inequalities that exist everywhere today — the socialism part — and emphasizes the ecological through respect and stewardship of our natural environment and lessening the devastating impact of our economic activity on the very basis of life. Ecosocialism is a rebalancing of the world — transforming society to a more ecocentric worldview. With a systemic analysis, we understand the crises of social inequalities and environmental catastrophe as inextricably linked. In the current political economic system of capitalism, where profit is the highest goal attained by growth at all costs, we see mass social inequalities and a devastated climate as symptoms of a systemic malady.

As ecosocialists, we do advocate public ownership of utilities. We believe communities should be able to control their common resources. We can look at water as an example. Access to water is a right and not a commodity. When resources are privatized, they are often mismanaged by corporations who also create monopolies and raise rates. This is a common story told across the globe, from the Cochabamba Water War against Bechtel in Bolivia to Detroit’s water crisis, where rates had risen 119% over the last decade. We need to be able to make the decisions that affect our lives, and we do this through democratizing the decision making processes so that we can create a world built upon fulfilling our needs.

Of the many troubling claims made by Mr. Garshfield, the most worrying to our member, fourth-year CCS biology major Henry Morse, was the claim that “scientists should not be making economic prognoses at all.” To argue that scientists should remain in their labs and out of public discourse has long been a technique used to keep the reality of our society’s ills hidden away from the public. Can we imagine what our country would be like if scientists like Rachel Carson (,who illuminated the dangers of the pesticide DDT,) hadn’t left their labs to speak out about the societal consequences of their work? Monsanto, the largest agri-business operation in the world, is poisoning the planet just by following its business model of maximizing growth and profit at the expense of our health, the livelihoods of farmers the world over and the possibility of our children inhabiting a livable environment. Just ask Neil Young, who tells this story on his most recent album the Monsanto Years.

Sociology professor John Foran, one of the gathering’s organizers and a member of the national System Change Not Climate Change ecosocialist network (and an ardent fan of Neil Young’s music and activism) is singled out as possessing “no background in economics. Why does Professor Foran feel qualified to advocate a radical systemic overhaul in a field he does not even study?” This is a fair question, on the surface. Foran’s response,: “Jason seems to believe that one needs a doctorate in economics to be a critic of capitalism, while at the same time noting, ‘To economists, the success of capitalism is at least as much of a consensus as the existence of global warming is among climate scientists. They might debate the minutiae, but the major points are not in doubt.’ The point today is that the climate crisis has been caused by the normal operation of capitalism. Why then should we look to pro-capitalist economists to fix it? It was the great radical economist Kenneth Boulding who famously wrote that ‘Anyone who believes that exponential growth can go on forever in a finite world is either a madman or an economist.’ Boulding was president of the American Economic Association and made contributions to sociology, political science, social psychology and philosophy as a contributor to the approach known as General Systems Theory.”

Jason misunderstands the “tragedy of the commons” as a critique of collective ownership of a common good, when public control over common goods like fresh water, clean air and the land that sustains our food production is in fact the solution to this problem. The tragedy of the commons is a problem generated by each individual maximizing his or her private good, a central tenet of free-market capitalism. The socialist Albert Einstein himself said that maybe we shouldn’t fix a problem with the system that created it.

Jason also asserts that “when a good is private, people will be careful not to deplete the resource on their own property, because costs will be incurred by the individual actor.” Yet the reason that we have an unprecedented environmental crisis on our hands is that corporations do not have to pay the full costs of their operation in terms of either resources depleted or toxic waste and greenhouse gases produced, costs which economists tellingly refer to as “externalities.” Ecosocialists, whether trained economists or not, see this devastation of the natural world as “the second contradiction of capitalism” (the first being the cruel incentive of employers to drive down wages as much as possible).

Growth at all costs, regardless of its effects on our earth and collective health, is a cornerstone of global capitalism today. Just this past month, Volkswagen, the world’s largest automobile manufacturer, admitted to rigging emissions tests in over 11 million cars. Cars were installed with devices that would direct a car’s engine to emit less pollutants, 98 percent less, during a test. What does it mean if VW, ranked most sustainable car maker in the world, is rigging its vehicles to pass emissions tests they would otherwise fail? The bottom line is green consumerism will not save us when profit is the driving force.

We can argue that this is a case of a few greedy executives, some “bad apples,” but the case of green-washing (creating a false environmentally-conscious image by appropriating environmental concern to expand markets) can be seen across industries, including, most absurdly, the fossil fuel corporations that are the largest and richest the world has ever seen. And recently, ExxonMobil has been found to have lied to the public for years when its own scientists told its executives of the dangers of climate change.

How do we start the desperately needed transition into a more just and sustainable system that rejects all socially and ecologically destructive systems, like patriarchy, racism, homophobia, transphobia and capitalism? What are the local measures we can take? How do we build people power and reclaim the right to make the decisions that affect our communities? These questions and others will be discussed at meetings of the UCSB System Change Not Climate Change group.

If you’re interested in these questions send an email to scnccsb@gmail.com for info on our next meeting. We invite Jason to attend.

“…that rejects all socially and ecologically destructive systems, like patriarchy, racism, homophobia, transphobia and capitalism?”

How are patriarchy, racism, homophobia, and transphobia even remotely related to the environment?

The sentence says all SOCIALLY and ecologically destructive systems.

But regardless of the grammar, mass systems like those mentioned are all interconnected. For example, environmental racism describes the way minority and low income people are disproportionately likely to live in close proximity to environmentally hazardous environments. Corporations are more likely to do things like dump toxic waste near minority communities because they have less power to do anything about it and the public is unlikely to care.

If you google “ecosocialism” I’m sure you’ll find lots of great information that further answers your question.