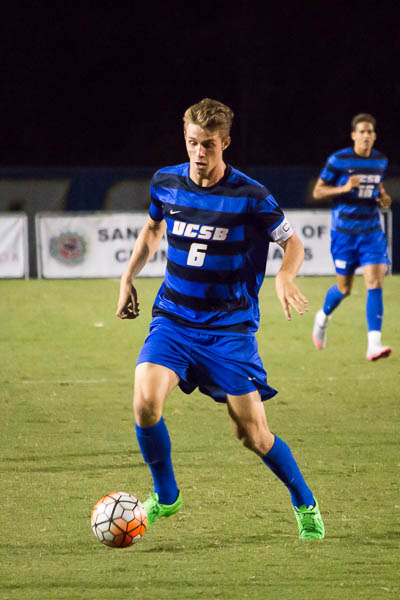 The year is 2014. The UCSB men’s soccer team is coming off an excellent bounce-back year in which it went undefeated in conference play on the way to a second round appearance in the NCAA Tournament.

Head Coach Tim Vom Steeg knows that things are going to be different this time around, as he has to replace nearly half of his team’s goal scoring production which previously came from graduated senior forwards Goffin Boyoko and Achille Campion.

Nearing the midpoint of the season, things haven’t been going so well. The Gauchos have struggled to score goals and have managed a record of 2-3-1 through six games – not nearly up to UCSB’s high standards.

Having tried nearly everything he could think of in search of goals, Vom Steeg is forced to make a big decision in the final weekend before conference play begins.

“We were at the point in our season where we were below .500. We had tried every forward combination we had and we couldn’t get results from them,” Vom Steeg said. “Nick was our next best option as a big target player with good size. It was a little bit out of desperation in terms of putting him up front, but we had seen a lot of things in practice that told us he might do well.”

Playing San Diego State on September 26 of last year, DePuy, a sophomore who had seen limited playing time being moved around the midfield and center back positions, got his first ever start at forward. Prior to that game, the 6-4 Irvine native had just one career goal, scored three weeks prior in a 1-1 tie against Northwestern.

Little did anyone know, this season was about to get turned around in a big way.

“I knew especially after my freshman year when we had a lot of seniors graduate that we were kind of low on the offensive side,” DePuy said. “I just wanted to work as hard as I could and help the team, whether that’s on defense or going up top and scoring a goal.”

And help his team he did, as he capitalized on his first start as the team’s leading offensive option by tapping home a goal in the 21st minute. The 1-0 result got UCSB back on track as it headed into Big West play, sparking a season-best run of four straight wins.

Not only did DePuy notch the first of his nation-best 13 game-winners over the past 13 months, but he began cementing his spot as the focal point in the Gauchos’ offense.

“He got us the goal, he won the game, and that’s going to lead to the next start, which leads to another goal and another start,” Vom Steeg said. “If you’re looking for goals and you’re getting goals, you’re not going to mess with that. After five or six games, we saw that up front could be the place for him.”

Having been voted the overwhelming favorites to finish first in the North Division in the 2014 Big West Preseason Coaches Poll, the Gauchos entered conference play last year at 4-3-1 and well short of living up to their own standards.

Facing Cal State Northridge in its Big West opener, UCSB was able to overcome a 1-0 deficit thanks to a 71st minute winner by DePuy, who headed in a far post cross from teammate Drew Murphy back across the six-yard box.

Neither the weekend nor DePuy were done at that point. Just two days later, UC Irvine came to town boasting a No. 3 national ranking as it looked to steal one on the road.

In one of the most memorable moments in UCSB’s recent history, DePuy stunned the Anteaters with an unbelievable strike from 30 yards out, giving the Gauchos a 1-0 lead with just 37 seconds left on the clock.

“I had a good chance early in that game and I knew I had to get that one back. I got the ball, I just wanted to hit it on frame and it went right where I wanted it to go,” DePuy said. “That was probably my most memorable goal here, especially since it was at home in front of a couple 1,000 people and against Irvine.”

With his second game-winner in three nights, and despite never having played forward for an extended period of time, the now former midfielder was suddenly thrust into the national spotlight, earning both a Big West Offensive Player of the Week and a National Player of the Week award.

“Things definitely started moving pretty fast after that. It was an honor,” DePuy said. “I’m glad I could get that achievement, but in the back of my head, obviously I was just thinking, ‘Help this team win,’ and I’m glad I could do that.”

Never one to boast about his individual achievements, the team-first attitude that DePuy has made evident every time he steps on the field is a key reason for why he has been so dominant over the past two seasons. It certainly hasn’t hurt in building a high level of trust with his head coach, as he continues to prove that he can get the job done each and every time he steps on the field.

“It’s a team sport. I wouldn’t be able to score those goals if someone didn’t cross it, and we wouldn’t win without our defense,” DePuy said. “I think [Vom Steeg] understands the trust aspect, that I’m going to work hard for my teammates and I’m a good forward that’s going to hold up the play. That helps a lot in the sense that we’ve known each other for two years already and we still have another year and a half to go.”

Starting at forward the rest of the season, DePuy went on to score six game-winners and 10 goals overall – good for second in the Big West.

Ever since making his first start at forward 30 games ago, DePuy has many times been the only difference between UCSB winning or losing. In games that he has scored, the Gauchos have a near-perfect, undefeated mark of 15-0-3.

“Our success this year, it’s no surprise, will start and end with how Nick does in terms of him scoring goals,” Vom Steeg said. “When he scores goals, we win.”

Proving that his breakout season was no fluke, the junior started his 2015 campaign the best way possible, scoring another decisive header against No. 9 Stanford in a 1-0 season-opening victory.

Things seemed to start following the same script every game, as in the Gauchos’ first four Big West games this year, DePuy scored five goals – four of them game-winners.

His list of streaks and achievements now reads like a perennial All-Star’s. At one point this season, DePuy earned his second career National Player of the Week award and three consecutive Big West Player of the Weeks, making him the first player ever to accomplish that feat. His total of five conference awards has him tied for third all-time in the Big West.

Prior to last Wednesday’s game at Sacramento St., DePuy had scored an incredible 21 goals in 26 games, more than any player in the nation over that stretch. He currently sits atop the country with seven game-winners in 2015 and is tied for second with 12 scores.

“We’ve seen situations this year where Nick has really started to take over games and be completely dominant,” Vom Steeg said. “Now, we just need him to keep going in that direction.”

It’s remarkable what DePuy has been able to accomplish, especially considering the fact that he had never been a permanent forward in his life prior to last season. As is the case with many breakout situations, it has been a combination of raw talent and excellent coaching that has led to all this success.

“We recruited Nick on 100 percent potential. Here was this really big, athletic midfielder who was mobile, had good feet, and a good first touch,” Vom Steeg said. “Once we’ve decided that he’s a forward, there is a set of skills that you need to work on in order to be a good forward. My job as a coach is to keep pushing him and keep encouraging him that the sky’s the limit.”

Another huge contributing factor has been the play of DePuy’s supporting cast, particularly during this season. A couple of left-footed forwards in sophomore Ahinga Selemani and freshman Geoffrey Acheampong have joined DePuy atop the Big West stat charts, with the former ranking third in shots and the latter tied for the conference lead in assists with seven.

“We’ve created a pretty good environment for [the players],” Vom Steeg said. “Nick doesn’t get those chances if he doesn’t have good players around him. He’s got Ahinga working hard for him, he’s got service coming, and now he just needs to keep doing his part.”

Up next for DePuy and UCSB is a huge game against Cal Poly this Saturday. Sitting in first place in the standings, the Gauchos will be relying on their superstar to bring them the postseason glory they have worked all year for.

Win or lose, though, DePuy will continue to be fueled by his competitive fire and the desire to play the game he loves.

“I’m loving my time at UCSB right now,” he said. “I’m loving the soccer, too. I enjoy it every time I play.”

Whatever happens down the stretch of this season, one thing is for sure: we’re all just lucky that he’s only a junior.