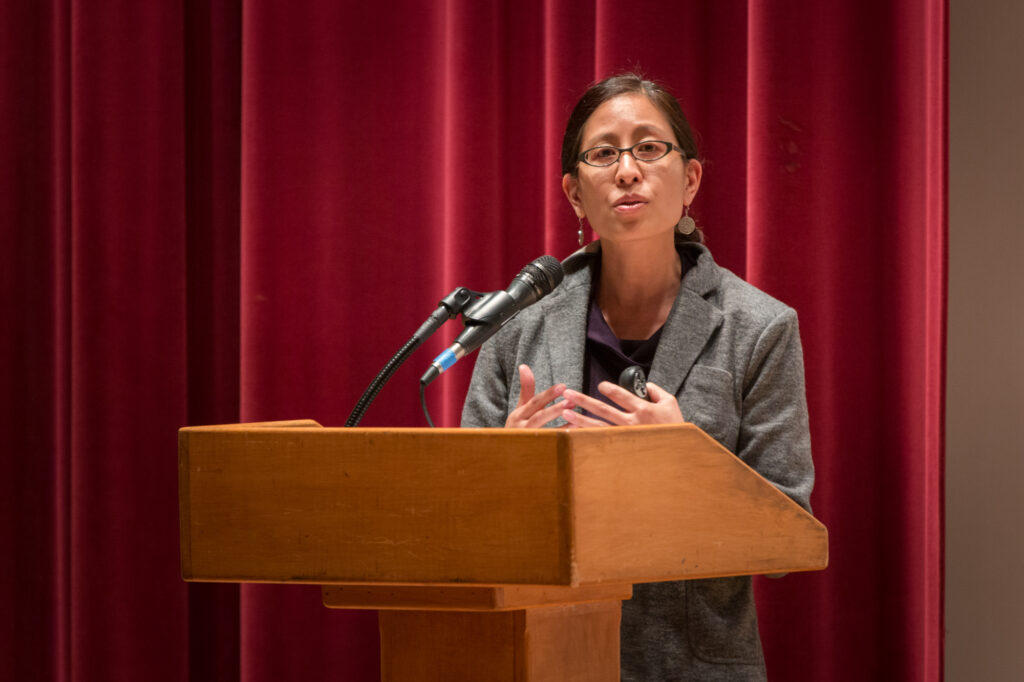 Okamoto spoke about Asian ethnic groups in the United States and how various social and cultural forces led to the creation of the panethnic Asian-American group, a term and identity used to describe Americans from all Asian backgrounds.

According to Okamoto, Asian ethnic groups in America did not organize to form a shared panethnic identity until 1968.

“Before 1968, the legal identity of Asian Americans was divided, with representatives from China, Japan, Korea,” Okamoto said. “They didn’t form alliances — instead they formed their own separate ethnic communities with their own systems of social assistance and support, and at times they intentionally distinguished themselves from one another.”

Okamoto also said there are a variety of differences between Asian ethnic groups, preventing the formation of a unified group prior to 1968. According to Okamoto, social, religious and economic factors contributed to separations between Asian immigrant groups in America.

“They spoke different languages; they brought different cultural traditions with them from their homeland; they also practiced different religions. This is something that still happens today,” Okamoto said. “I would also argue that during this period different ethnic groups didn’t work together in the fields … because they arrived in successive waves to the United States. When one group fell out of favor, another group came to meet the labor demand.”

According to Okamoto, a new Asian-American identity formed in the 1960s when Asian-Americans sought involvement in the black power movement, the anti-war movement and protests at UC Berkeley and San Francisco State for ethnic studies programs.

“Asian American students and community activists began to realize their unique position and perspective, and they created an identity that encompassed all Asian origin groups,” Okamoto said. “They rejected the label ‘oriental’ because it represented the European colonialist view and instead adopted the identity of Asian-American.”

Okamoto said the creation of a panethnic group like Asian-American does not replace individual ethnic groups such as Chinese and Korean-Americans.

“I argue that when panethnicity occurs — when ethnic backgrounds expand to other groups and an all encompassing identity — this doesn’t necessarily mean that boundaries have been displaced or attenuated,” Okamoto said. “Instead, the boundaries can have a layered quality where multiple identities can coexist and even be complimentary.”

According to Okamoto, the creation of panethnic groups allows immigrant groups to build new, powerful communities.

“By trying to alter widely agreed-upon racial categories through organizing, Asian-Americans have attempted to change the meaning of these racial categories,” Okamoto said. “By doing this, immigrant groups can create new forms of community and identity and can call for shifts in the current distribution of resources.”

MCC program director Sepideah Mohsenian-Rahman said Okamoto was invited to the MCC’s “Race Matters” series to emphasize a theme of intersectionality and bring a new perspective to the MCC.

“The logic of the ‘Race Matters’ series is to bring a diverse group of academic experts working in various fields that intersect with race in one form or another,” Mohsenian-Rahman said. “We wanted a representative from the Asian-American community to bring diversity and variance to the MCC, and Dina Okamoto’s work is very cutting edge, and she’s an incredible sociologist.”

“I liked how she explained the different perspectives in the protest movement,” Singh said.

“I think it’s really important, particularly in California, [which] does have an incredibly large Asian American population that is increasing both as a general race and as the ethnicities within it,” Hikido said.

So true, and often overlooked… “Multiple identies can coexist, and even be complementary”

Much of what Dr. Okamoto says is true. the history of Asian American, as well as the impact it had on non-Asian Americans and even within the Asian American category. When I first heard the category, I was a bit reluctant to unify with it because all the rest of the subcategory groups weren’t necessarily spoken about much less acknowledged; and God only knows until now what is an American Filipino (my choice in reversal of the two words which is a whole different subject). I no longer use the term Asian American or Asian Pacific Islander because I find… Read more »