The Daily Nexus
Science & Tech
A California Sharktober
October 22, 2015 at 5:00 am by Karla Bernardo 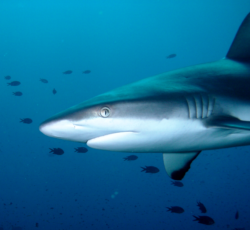 Although the Great White Shark (shown above) has not changed its migratory pattern due to El Nino, other shark species have been following their prey and moving closer to the California coastlines.

With the increased amount of shark encounters that have occurred this past year due to the warming of the marine climate, surfers and beachgoers must be much more vigilant when out in open ocean. The El Niño Southern Oscillation — an irregularly occurring climate change cycle that causes shifts in sea surface temperatures — has brought warm waters that attract shark species such as the great hammerhead, which flourish in temperate to tropical waters.

UCSB Marine Science Institute researcher Jennifer Caselle studies reef ecology with the goal of assessing the impacts of climate changes. With the blend of El Niño off the shore of Southern California, and the large mass of warm water off the North American west coast creatively named “The Blob,” the Pacific Ocean is experiencing a rare rise in temperature, causing migratory changes for marine life.

“Hammerheads may be coming much closer to shore than usual because their prey have moved in,” Caselle said. “The warmer waters certainly have allowed them to migrate much further north.”

Douglas McCauley of UCSB’s Department of Ecology, Evolution, and Marine Biology focuses his research on ecosystem ecology, and has examined coastal shark populations as well as the role of community structure in coral reef ecosystems.

“Pelagic, or open ocean sharks like the hammerhead are highly mobile, and their home range is defined by these moveable boundaries of warm water,” said McCauley. “Tropical sharks don’t need visas nor do they care about borders; when the warm water heads north, they follow.”

As far as the abundance of the notorious great white shark, sightings of this species on the California coast have not been atypical in 2015. Great whites prefer temperate to subtropical temperatures, from 50-73 and commonly reside in rocky reefs rather than coral reefs. They are known predators of California sea lions, whose breeding grounds range from the California Channel Islands south to Mexico. This ecological pattern has not changed significantly due to El Niño effects.

“[Great] white sharks are responsible in an average year for most attacks in the central coast,” McCauley said. “Data from [great] white sharks linked to GPS devices and acoustic pingers show that they inhabit the central California coast area from around August to December. This period is sometimes referred to as ‘Sharktober.’”

A frequently referenced theory regarding shark attacks comes from the lunar cycles affecting the gravitational pull of the tides. A large percentage of this year’s shark encounters on the California coast occurred within a few days of the new full moon, which can cause some to believe that there is a direct link between lunar phases and shark sightings. Others may speculate that, as a new moon typically brings larger swell, more surfers and water sport athletes are out in the ocean during this time, therefore increasing the likelihood of human-shark encounters.

In 2013, researchers at the University of West Florida examined the potential association between lunar phases and shark attacks given previously documented incidents, only to find that there was insufficient, mathematically valid evidence to reach that conclusion.

Erich Ritter, lead author of the paper, suggested that more pragmatic approaches must be taken regardless of whether or not a correlation can be found between the lunar cycle and recorded accounts of shark attacks.

While the abundance of news headlines declaring yet another shark attack in the central to southern coast of California can be a cause of fear, McCauley stated that the chances of having a negative encounter with a shark are so low that he would not necessarily caution beachgoers to change their behavior much during an El Niño year.

“More people were killed this year taking selfies than by sharks,” McCauley said. “For avid marine animal watchers, this year may be a once in a lifetime opportunity to see some really unusual and beautiful sharks that may never be seen again in California. For the rest of us, El Niño really just means nice warm water to surf and swim in.”

If one does encounter a shark, it is important to distinguish aggressive behaviors prior to an attack, noted Caselle.

“One should be aware of any behaviors such as rapid swimming, lowering of the pectoral fins and arching of the back,” Caselle said. “If you observe that, it is best to slowly and carefully get out of the water.”