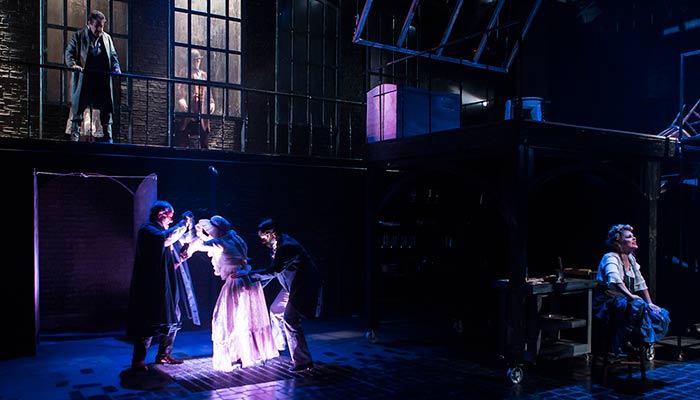 A dingy, dark and overall dreary set has been constructed in the New Vic theatre for the Ensemble Theatre Company’s (E.T.C.) performances of “Sweeney Todd.” This creepy musical of the demon barber has been immortalized in Tim Burton’s movie version, but nothing beats watching the action live. This performance runs almost the entire month of October, and with just ten actors and actresses, transports us to the morbid realms of Stephen Sondheim’s musical works.

This means that in lieu of extra performers, each actor (other than the two main murderous conspirators, Sweeney and Mrs. Lovett), often take a step back from their characters to narrate. This is especially prevalent in the three renditions of “The Ballad of Sweeney Todd,” whereupon every ensemble member warns the audience by stance, stare and words of the demon barber of Fleet Street.

Though many of the performers made their E.T.C. debut, all had incredible works to their name — from previous “Sweeney Todd” performances to musicals like “Miss Saigon,” “Les Miserables” and “Mamma Mia,” to name just a fraction. Their professionalism showed particularly in an instant when the show had to be briefly paused. A technical difficulty with a complex set piece had made it unsafe for the actors to continue the plot. Yet even as stage manager Aleah Van Woert informed the audience of this brief interruption, the actors refused to break character — Sweeney continued to prepare his next victim for the closest shave he’ll ever have, and the rest of the performers likewise continued in silence as though the whole show had been temporarily placed on mute.

For Tuesday night’s audience, this display of total dedication to character was equally as impressive as the rest of the show. Several students in UCSB’s BFA Acting program attended the show that evening, in support of UCSB Department of Theatre & Dance faculty member Jeff Mills, who was the fight coordinator for “Sweeney Todd.” Amongst these students were second-years Fletcher Wolfgang Hoffman and Cameron Eisner.

With Broadway stars gracing the stage, it could’ve been easy to forget the behind-the-scenes MVP’s. To Hoffman, however, their work was one thing that really shined through. “The set was beautiful. The designers really took their time designing everything to really transport you to Victorian England with details like the cobblestone streets, not to mention the costumes … the color palette used for the production really reinforced the dark tone and theme of death in the show,” Hoffman said. “A well-done set can really help an actor’s performance and help cement the audience in the reality of the show.”

Eisner had no previous experience with “Sweeney Todd” before seeing it at the New Vic, and for him the bizarre plot took a bit of effort to swallow. SPOILER ALERT: “When [Sweeney and Mrs. Lovett] started suggesting that they kill people and bake them into pies, I flipped out. I had to ask the person sitting next to me for confirmation that I had understood them correctly.” Atrocious as the whole idea was, however, Eisner still found a particular moment of beauty. He remembered, “The man with the bird in a cage … he just stood there, back to the audience, the pole angling upwards from stage left to stage right, motionless.”

The final image of the show is of Sweeney Todd standing in a lurid orange oven, with the doors closing shut upon the fire. This powerful impression impacted both Hoffman and Eisner; undoubtedly the rest of the audience will likewise be slow to forget E.T.C.’s spectacular performance.