The Daily Nexus
Sports
Crucial Week for No. 19 UCSB Begins Tonight Against UC Davis
October 21, 2015 at 8:18 am by Michael Jorgenson 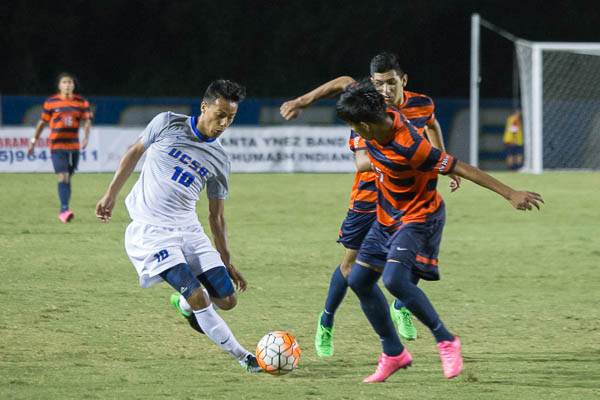 The next few days could be the defining moment for the No. 19 UCSB men’s soccer team in 2015. With just four games remaining in the regular season, the Gauchos play UC Davis today and No. 20 Cal Poly on Saturday, leading both teams by just a point for first place in the Big West standings.

Two straight losses on the road has set Santa Barbara back to a record of 9-5-1 overall and 4-2 in the conference. Meanwhile, Davis enters today’s game at Harder Stadium at 7-6-2 overall, 3-1-2 Big West.

“Our season does in effect come down to this week,” Head Coach Tim Vom Steeg said. “Last week is done, but we can’t forget why we lost both games. I’m excited that our guys are going to show up tomorrow and play really hard against a team that’s been playing really well.”

After starting conference play a perfect 4-0, the Gauchos crashed back down to Earth with a rough 5-2 loss at Sacramento St. last Wednesday. Playing at rival Cal Poly just three days later, UCSB was unable to hold on late, falling 3-2 in double overtime.

“The Big West conference is not kind. You have to play well in every game,” Vom Steeg said. ”

Fortunately for the Gauchos, they will get a shot to play both teams again, this time on their home field. UCSB has once again had its fair share of success playing under the lights of Harder Stadium, owning a 5-1 mark at home this season.

Getting back on the winning track may just have to do with the play of junior forward Nick DePuy. With seven game-winners this year, DePuy has more than any player in the nation. His 12 scores overall is tied for second.

The 6-4 Irvine native had scored in five consecutive games prior to last week’s two-game road trip, and it seems to be no coincidence that when his streak ended, so did his team’s. In games where DePuy has scored over the last two seasons, UCSB has gone an undefeated 15-0-3.

Giving support on the Gauchos’ offensive front is a wide combination of attacking options that includes three dangerous lefties.

Sophomore forward Ahinga Selemani ranks second in the Big West in shots with 43, behind only DePuy. The pressure he has applied to back lines this year tells much more than his three goal, two assist stat line will.

A leading candidate for Big West Freshman of the Year in Geoffrey Acheampong has been the Gauchos’ best creator all season. To go along with his three goals, the forward’s seven assists ranks first in the conference and seventh in the nation. He has recorded a point in eight of UCSB’s last ten games, accumulating a record of 7-2-1 when he has scored or assisted this season.

The Gauchos’ last two outings also saw the return of junior left back Ismaila Jome from an ankle sprain that kept him out for nearly eight full games. Proving that he’s back and ready to make an impact heading into the postseason, Jome put away a goal in each of last week’s losses – his first two scores of the season.

With most of the starting lineup ready to go at this point, the pressure falls on UCSB’s defense to get the job done as it tries to secure a No. 1 seed. The Gauchos have conceded 11 goals in their six conference games this season, just one less than last-ranked Sac St. and UC Irvine.

“To be 14, 15 games into the season and dominating games, but then giving up excellent scoring opportunities, it’s a recipe for disaster,” Vom Steeg said. “The way we’re going to bounce back is with a renewed commitment to defending. Not just our defenders, but some of our forwards coming down. We need to go back from giving up eight goals last week to giving up none, or one.”

For the Aggies, defense has not been as much of an issue, giving up just six through six Big West games. They own the conference’s longest active unbeaten streak at four games, all of which went into overtime.

Senior defender/midfielder Lucas Mohageg has scored seven goals this season to lead the offense, tied for second in the conference. More recently, redshirt freshman defender Roy Boateng has given solid production, recording a brace in a 3-2 win over Cal Poly last Wednesday and picking up the assist on Davis’s lone goal against Sac St. on Saturday.

UCSB’s focus tonight will be solely on getting a win, but win or lose, that focus will quickly shift to Saturday’s game with Cal Poly. The Mustangs are also in action tonight, playing Sac St. at home as they look to surpass both UCSB and Davis in the standings.

“Every year it comes down to something like this,” Vom Steeg said. “When you’re the team that gets the bullseye like we do, we have to rise to that challenge every time we play. The players know what’s at stake and I believe they are committed to give us the effort that we need.”

The Gauchos and Aggies are set for kickoff tonight at 7 p.m. at Harder Stadium.

Clear, infrimatove, simple. Could I send you some e-hugs?