The Daily Nexus
Sports
UCSB Preparing For Competitive Finish to the Season
October 20, 2015 at 7:26 pm by Elliot Thornton 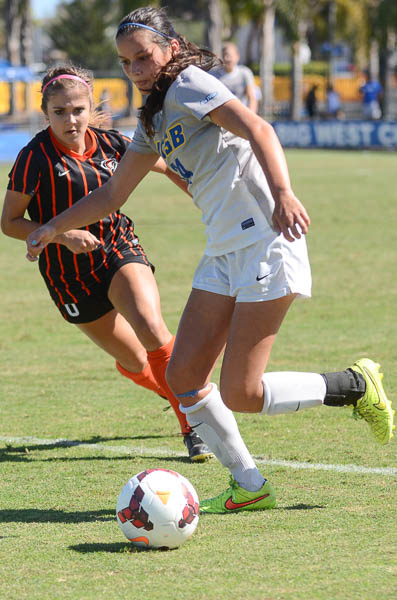 Santa Barbara’s two-game winning streak has brought its overall record to 10-4-1 with a record of 3-1 in conference. The Gauchos hold on to third place in the Big West behind CSUN and Cal State Fullerton.

Entering arguably the toughest stretch of the year, head coach Paul Stumpf has been impressed with his team’s ability to respond to such high-level play.

“Any time you can get six points out of two games in this difficult conference, it’s a great weekend for you,” said Stumpf. “The young ones keep impressing us but it’s really everyone [who has] stepped up to the plate and done a good job fulfilling their role.”

The Gauchos made big plays when it mattered last week, blowing out central coast rival Cal Poly 4-0 on Thursday and stealing a 2-1 victory late at Davis Sunday.

With four games remaining in conference for UCSB, each match can make or break its qualification in the Big West Tournament. The Gauchos start a tough road ahead as all four teams are in contention for a playoff spot including 3-2 UC Riverside and 2-2 UC Irvine. This is familiar news for Stumpf, though.

“Every year heading into the last weekend of the season, six or seven teams of the nine teams total still have a mathematical chance at the tournament,” said Stumpf. “[Because of this], every game is critical. If you have one game a year against somebody and you’re better than them you need to get the result.”

UC Riverside heads into its Friday night match ranking in the top four in goals with 23. Much of the Highlanders’ scoring can be accredited to redshirt junior midfielder Blanco Barrio. The San Bernardino native scored both goals in the Highlander’s 2-1 road victory on Friday against then No. 1 Long Beach State. The 49ers had been undefeated until their loss last weekend.

Barrio’s performance was acknowledged on Monday as she earned herself the Big West Player of the Week award. Barrio now leads the team in scoring with 16 points off five goals and six assists, good for fifth place in the Big West.

The junior midfielder will not be suiting up for the Highlanders after being issued two late yellow cards in their 1-0 loss to Fullerton on Sunday.

For UC Irvine, look for sophomore forward Kiana Palacios and sophomore midfielder Alex Karlowitsch to be the primary weapons on offense. The two sophomores lead the team in scoring with two goals apiece and a combination of 12 points. Palacios finished with a team-high five shots and one go-ahead goal on Sunday, leading to a 2-0 victory over Long Beach State.

Containing Palacios and Karlowitsch in the open field will be a big focus for the Gauchos and junior defender Sydney Fuertes. Fuertes played a central role in Santa Barbara’s two wins over Cal Poly and Davis. The junior from San Clemente earned the Big West Defensive Player of the Week award after her contributions on the defensive line.

UCSB will honor its seniors prior to Friday night’s match with UC Riverside. Kickoff will take place at 7 p.m. at Harder Stadium. The Gauchos will welcome UCI on Sunday at 1 p.m.