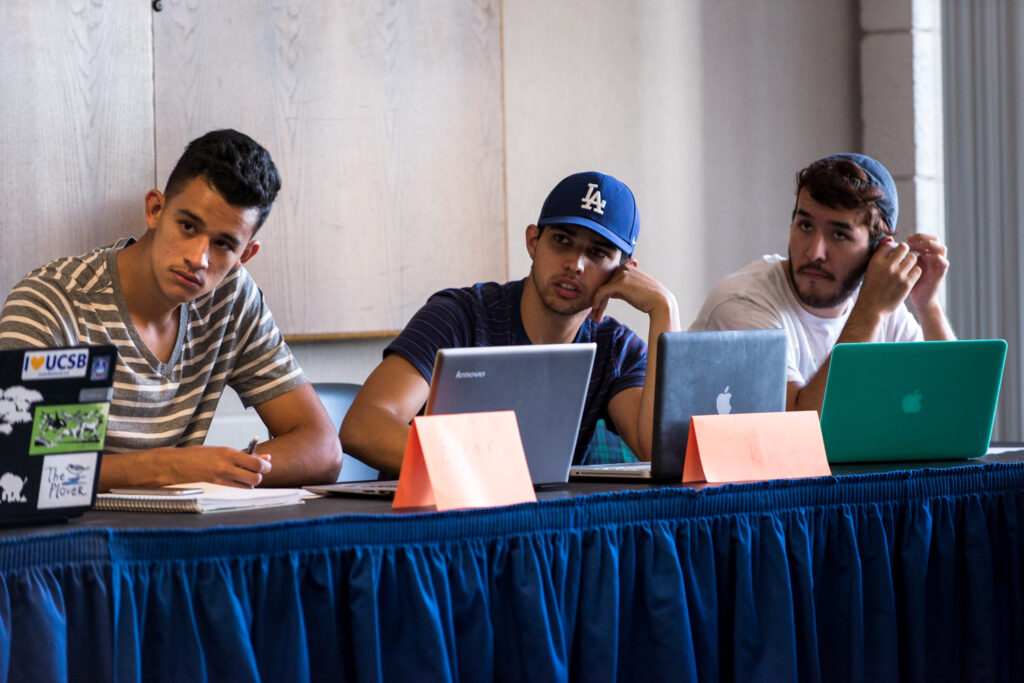 The committee began its meeting with $34,000 in Office of Student Life (OSL) funds, $6,665.26 in Senate unallocated, $45,000 in Student Initiated Outreach Program, $45,000 in Culture Weeks and Graduations, $27,000 for sports teams and $17,164 for academic teams. A.S. F&B fully granted five requests, partially granted one request, tabled two requests and declined funding for one request.

Kapatirang Pilipino (KP) requested $730 for Filipino Visibility Week, which begins Nov. 9 and will include an open-mic night, a parol (Filipino Christmas lantern) making workshop, a Justice for Filipino-Americans March in L.A., a carnival and Filipino cuisine throughout the week.

A KP representative said the week’s events will portray the academic, cultural, social and political pillars of the organization.

“We try to have events that really enforce the pillars of our organization, so we are here to ask for funding for our Filipino Visibility Week,” the representative said.

The committee fully funded the group on the condition that the $160 initially requested for decorations and arts and crafts would be used solely for parol-making supplies.

“The event originated in 1975 when some native students couldn’t go home for Thanksgiving, so we began to offer an alternative for those students,” Yun said. “It’s a safe space for our native students and allies and every student is welcome to attend.”

A.S. F&B voted to table the request until next week to discuss the use of the organization’s one-time exception clause in the allocation of funds.

Raman said the event is for potential members of the physics honors society.

“The purpose of this event would be to interact with prospective new members, get people to join,” Raman said. “We’re speaking to freshman physics classes which have hundreds of students.”

“Since the event is for physics students with certain requirements, it is more of a recruitment event than an open-student event,” Ninh said.

The committee voted unanimously to decline funding to the organization based on the nature of the event.

Kawashina said the events are a way for American students learning about Japanese culture or language to interact with international students from Japan.

The committee voted to bundle and fully fund the two events.

UCSBreaking representatives Christina Chong, Chris Pom and Steven Hu requested $1,350 to host a breakdancing competition at UCSB. They requested $1050 for judges and DJs, and $300 for prize money.

Hu said the event is a way the group to gain recognition as a breakdancing club.

“It’s a great way to get people interested in our club and it allows us to expand our club,” Hu said.

The committee voted to partially fund their request, excluding the prize money, because it is against precedent to allot prize money to an organization.

Lambda Sigma Gamma requested $1,300 to hold a Mr. Greek Universe pageant to raise money for their national philanthropy: California Head Start Program. The event is open to all of Isla Vista.

A Lambda Sigma Gamma student representative said the event is a way to encourage inter-Greek relations while raising money for a cause that helps young students across the state.

The committee voted to fully fund the fundraiser event, under the condition that all UCSB would be free to participate and attend the event.

Okafor said the conference is a way for black students on campus to gather as a community and learn about the way their community interacts with the world. Students will also learn from prominent black public figures about future professional success. Student will learn about the theme of the event, “Planting the seeds of the future, planning our next steps.“

“It’s really important that black people on our campus and anyone in our community feel welcome here and are able to see each other and really flourish,” Okafor said.

Health and Wellness Liaisons for the Residence Hall Association (RHA) Jose Magana and Paloma Hinojosa requested $2,474 to install condom dispensers in each of UCSB’s residential halls. Currently, students in the residence halls may obtain condoms by requesting them from their hall’s Safe Sex Peer or Residence Hall Advisors.

Magana and Hinojosa said the goal of the dispensers would be to make condoms more accessible for the general student body and promote safer sex.

“There’s a stigma for going to another person to get a condom, even the Safe Sex Peers, and we want to eliminate that stigma. We want to put the dispensers somewhere where all students will have access to them.”

The committee had concerns about the safety of the dispensers, and voted to table the request indefinitely as A.S. representative works collaboratively with RHA to create a safer, more functional condom dispenser plan.

I really conu’ldt ask for more from this article.