The Gauchos snagged two conference wins this weekend in a 4-0 blowout against central coast rival Cal Poly on Thursday and a 2-1 victory against UC Davis on Sunday. Coming off a 1-0 loss against Long Beach State last Sunday Sunday, Head Coach Paul Stumpf emphasized the team’s focus of sticking to what it does best.

“[Our] tactics didn’t really change,” Stumpf said. “We wanted to [maintain] possession of the ball throughout the match. We knew we were in for a physical battle, more than what we saw at Long Beach, but [our] players kept their composure very well.”

UCSB improves to an overall record of 10-4-1 and 3-1 in conference. In addition, Santa Barbara is now third in the Big West standings, just one-match behind tying first place Cal State Fullerton.

The Gauchos controlled possession from the first whistle, racking up five corner and five shot attempts by the end of the first half. 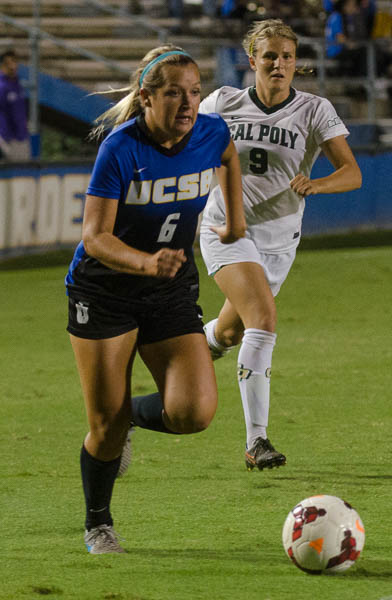 It didn’t take long for Santa Barbara to put a point on the board as sophomore midfielder Dakota Griggs lined up for her third corner in the 12th minute, sending a perfect cross for sophomore defender Kate Shoemaker. Grigg’s pass had just enough hang time for Shoemaker to beat her defender and head the ball into the back of the net.

“I told myself let’s put this game away from the beginning and not let it go on,” Shoemaker explained. “Even if you’re the better team, if you don’t put away the ball you could lose [the match] so I just took a chance to get a goal.”

The score marked Shoemaker’s second goal of the season. Prior to the goal, her lone score of the year came during UCSB’s 3-2 non-conference win over Saint Francis on September 13th.

Senior goalkeeper Beth Ritter also made her presence known on the defensive end, tallying three saves in the first half including a diving grab in the 25th minute off the shot attempt of Cal Poly midfielder Emily Hansen.

The Gauchos resumed their offensive attack in the second half as senior Savannah Francis lined up for a free kick in the 67th minute. Shooting from 30 yards out, Francis placed a ball just in the reach of sophomore forward Amanda Ball to head it past diving junior goalkeeper Alyssa Giannetti to the back left corner of the goal. This was Ball’s first score of the year since coming off an injury on August 28th.

The Mustangs’ closest chance at goal was in the 40th minute off the crafty footwork of freshman forward Caitlyn Kreutz. Kreutz beat junior defender Sydney Feurtes and freshman forward Marrisa Salvoldi down the left flank placing a line drive to the left of the net only to be met by Ritter.

Things got chippy in the 69th minute as Emily Hansen and Jessica Parque scrambled for the ball around center field. After throwing an inadvertent elbow at Parque, Hansen was issued a red card and ejected from the game. A total of 25 fouls were issued between the two rivals, two yellow cards and one red card given to the Mustangs.

The Gauchos closed things off in the 75th minute as junior forward Hannah Dearborn stole the ball from a Cal Poly defender and led a two-on-one attack with Parque. Off the give-and-go from Dearborn, Parque took advantage of Giannetti’s misjudgment to try to save the ball and booted a kick to the back of the net for the score. The goal pushed UCSB’s lead to 3-0. Another goal from Dearborn in the 79th minute gave her team a comfortable lead, ending the match in a 4-0 victory. Cal Poly’s loss to its rival dropped the Mustangs to 5-6-5 and 1-4 in Big West play.

The Gauchos managed to take care of business Sunday in their match against the UC Davis Aggies. With the match tied at one a piece heading into the second half, freshman forward Mallory Hromatko led an attack down the line in the 86th minute. She took a pass from freshman defender Ryan Kokoska and launched a kick to the upper left corner of the goal past Davis’ redshirt freshman goalkeeper Alexis Smith for the score.

This was Hromatko’s seventh goal of the year and her fourth game-winner of the season. The freshman’s late score sealed the deal for her team as Santa Barbara secured the win with a final score of 2-1. The loss lands UC Davis with an overall record of 8-6-2 and 1-3-1 in conference.

UCSB will play its final two home games at Harder Stadium next weekend hosting the Highlanders of UC Riverside at 7:00 p.m. on Friday, Oct. 23rd. On Sunday, Oct. 25th, Santa Barbara will pay tribute to its seniors in a 1:00 p.m. match against UC Irvine.