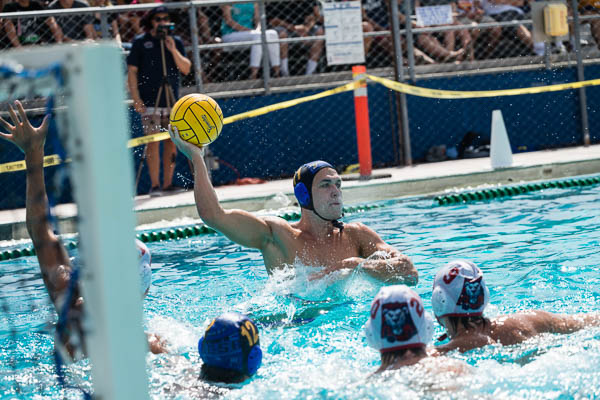 Liam Gaughan passes the ball after pulling defenders out of their zones. Eric Swenson/Daily Nexus

The Gauchos were finally able to do something this weekend that they hadn’t been able to do in almost two years — celebrate a Mountain Pacific Sports Federation (MPSF) win. This came after a big 10-7 win at No. 8 LBSU. However, No. 6 UCSB’s celebration was cut short as the next day No. 2 USC came into Santa Barbara and beat the Gauchos 6-5 in a game that was wildly intense on all fronts.

The split puts the Gauchos at a very respectable 12-7 record and 1-3 in conference play while LBSU drops to 7-10 on the season and are still in search of a conference win with a 0-3 record. The big gut-check win for USC improves their record to 17-2 overall and helps keep their perfect MPSF start, as they are now 5-0.

The match against USC was an absolute must-watch. The crowd was so vibrant, really cheering on the Gauchos as they tried to pull off the upset. The coaches were out of their seats most of the game, coaching their players up on the fly. And the players themselves showed nothing but heart. This game truly encompassed the greatness of water polo.

“It was amazing,” senior goalkeeper Chris Whitelegge said. “We have the best crowd in MPSF; we proved that today and honestly the atmosphere was just amazing.”

The high intensity began right when that whistle for the match blew. The first few possessions for both teams ended in poor shots, not because of bad offense but because of great defense, something that Head Coach Wolf Wigo really preaches to his players.

“Defense is definitely an emphasis.” Wigo said. “A great defense is what generates a good offense and our defense on front court was amazing.”

UCSB broke the ice about halfway through with sophomore Shane Hauschild throwing a beautiful pass to freshman Boris Jovanovic in the corner for an easy goal. The first quarter ended with UCSB up 2-1.

The Trojans would not let the Gauchos hold its lead for long. After a steal, sophomore Matteo Morelli threw a pass the length of the pool to sophomore Lachlan Edwards who converted the goal. USC then scored three seconds before the end of the half, taking a 3-2 lead. Both teams traded goals in the third to make the score 4-3 after three.

The final frame is where this game had just a slew of emotion. It started with the impressive defense from both teams until junior Blake Edwards took over. The second-best goal scorer in the MPSF scored two goals, the latter coming with just over two minutes left that seemed to doom Santa Barbara. It put them in a familiar situation that they were in just a couple weeks ago in their first week of conference play — scoreless fourth periods. However, this team was ready to right the wrong of those first two games.

The Gauchos began their attack when Jovanovic made a goal from the corner as the shot clock was expiring. This made the score 6-4 in favor of USC. After stellar defense, the Gauchos scored again, this time courtesy of junior Mitchell Hamilton. With just over a minute left, the Gauchos closed the lead to one. Again, good defense led to the Gauchos getting one final look to tie the game and send it to OT. The final shot was one that the Gauchos made twice earlier in the match, Jovanovic from the corner. Unfortunately this time it did not work as it clipped the goalpost and went out of bounds. The Trojans ran the rest of the clock and it was over.

“It was a pretty good look,” Wigo said. “It was a shot we saw earlier in the game, it was there; unfortunately it didn’t go in.”

The loss is one that will stick with the Gauchos as they continue on their crusade of MPSF games. After a heartbreaker like that, teams can either fall apart or be motivated to work harder. UCSB seems to want to be the latter.

“It sucks and hurts, but if anything, this will help us,” Hauschild said. “We are there, we are competing with these top teams, we just have to convert those opportunities that make the difference.”

“We knew it was going to be a tough game,” Whitelegge said. “We started off a bit sluggish but we got the win — that’s what matters.”

The Gauchos did in fact start out sluggish, falling behind 2-0 early on before grinding their way back to tie the game at 2-2. They fell behind again 4-2 midway through the second. Again Santa Barbara got back into the game, tying it up and making the halftime score 4-4.

The third frame is where UCSB took off. The Gauchos outscored LBSU 5-1, two courtesy of Shoemaker, and took a commanding four-point lead into the final period where they were able to hold on and get their first MPSF win of the season.

“It was a strong win,” Wigo said. “This is now our fourth time beating them this season. I don’t think we’ve ever done that, it was great.”

This weekend certainly was telling of the Gauchos. It told fans that they are not only resilient, but unwavered by whoever it is they play. To break a losing streak against a rival team at their place is nothing short of great. And to then go back home and play an amazing match against the second-best team in the nation with absolutely no “hangover” from their emotional win the night before is also noteworthy. Although their MPSF record might not show it just yet, UCSB still has a chance to do great things in conference play if they can keep that intensity.

The Gauchos’ next match is Friday against San Jose State at their pool at 2 p.m.