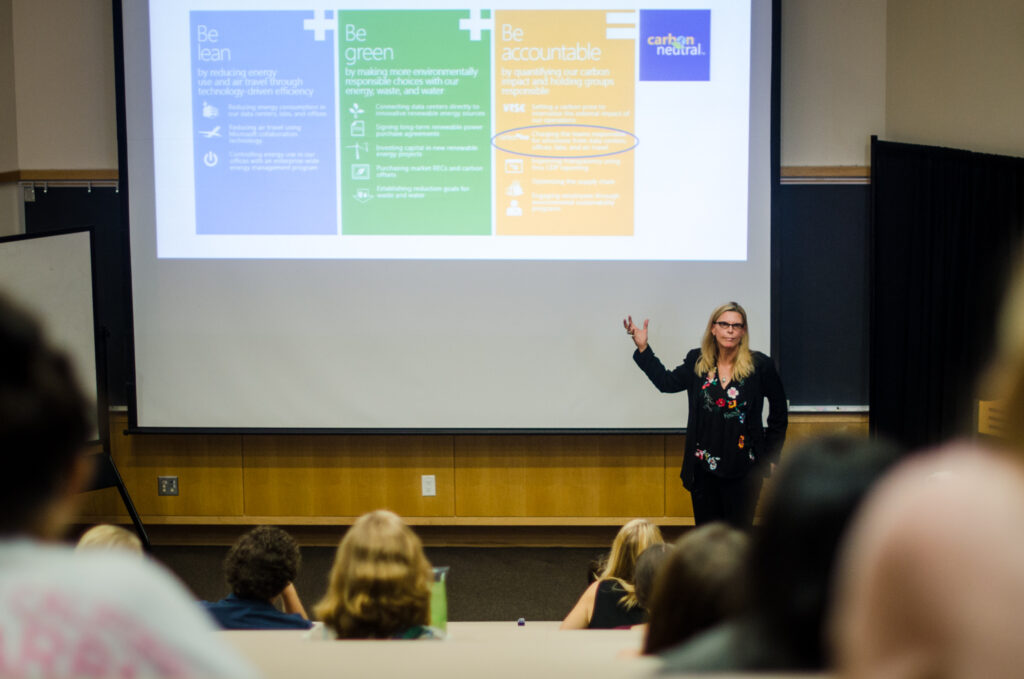 DiCaprio said the carbon fee model imposes fees on business units within Microsoft Corporation according to their carbon emissions.

“What we do, technically speaking, is we cascade the price of carbon down through the different business units and then we collect the funds in the central pot and use all those funds for environmental initiatives to reach carbon neutrality,” DiCaprio said.

“It was just recently, a couple weeks ago, recognized by the New York Times in an article in the business section, which means it’s getting mainstream,” DiCaprio said.

According to DiCaprio, it was difficult to gain support from Microsoft executives when first attempting to reduce the corporation’s carbon emissions.

DiCaprio said she was able to secure the support of executives when she learned to “speak their language” and focus on the relationship between carbon emissions and money, which lead to the creation of the internal carbon fee model.

“I started thinking: Okay, I’m in a business, I’ve got to start talking in terms of dollars,” DiCaprio said.

“We are not only reducing carbon in Kenya and emerging nations, but also taking money from developing countries and getting them out to the emerging nations to develop a low carbon economy,” DiCaprio said.

“We are able to allow them not only to plant trees, but also go build factories and sell clothes and manufacture clothing with Puma and then recycle money back to be able to build schools and hospitals for healthcare and get fresh water for people,” DiCaprio said.

“It brought into prospective the impact you can have on the environment, and more of the benefits that actually show when you do work,” Keeling said.

“When you hear about it, it makes so much logical sense but it’s not something that I’ve seen widely done,” Collins said.

According to Collins, corporations like Microsoft often create nonprofits to separate philanthropy from business.

“They do not want their projects on the side to be associated with their company,” Collins said. “I think this is a really interesting model that has captured the minds of the leadership so well.”

“To economically make that kind of impact on a community like that seems so far removed from what companies are able to actually accomplish,” Perkins said.