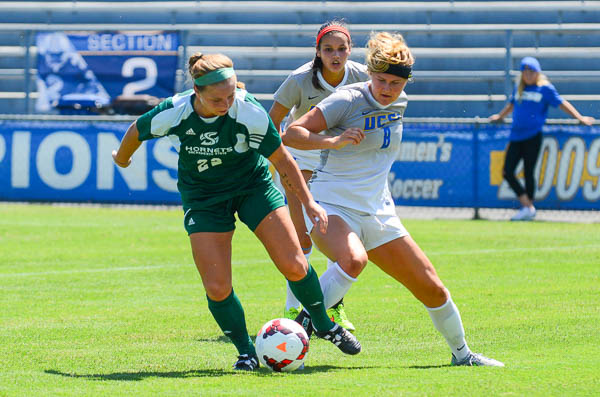 Coming off a 1-0 upset at home against Long Beach State, it is back to the drawing board for the UCSB women’s soccer team as it prepares for another home matchup against rival Cal Poly tonight at 7 p.m.

“We didn’t give up many looks at the goal against [Long Beach] but the goal they scored was a bit of a mistake on our part, Head Coach Paul Stumpf said. “We’re a bit disappointed about the result [of the match] but it let us know we competed very well with the number one team in conference right now.”

Sunday’s home conference opener snapped UCSB’s three-game winning streak. Santa Barbara holds a record of 8-4-1 overall and an even 1-1 conference standing. The Mustangs enter Harder Stadium with a record of 5-5-5 overall and 1-3 in the Big West.

Despite its loss, this past weekend was a learning experience for the young Santa Barbara team.

UCSB started four freshmen against Long Beach including midfielder Sydney Magnin and forward Mallory Hromatko. Although they did not score a goal, the two helped get touches to sophomore forward Amanda Ball and senior forward Savannah Francis, who both returned from injuries in Saturday’s match.

“It’s great getting these experienced players back on the field,” junior defender Sydney Fuertes said. “This allows our subs to maintain the same level of play the game started at and mix [it] up depending on the personnel.”

Francis and Ball have been sidelined for the majority of the season, Ball being out since UCSB’s 1-1 tie versus San Jose State on Aug. 28. The two have made an impact in their two games back combining for seven shots and one goal.

The majority of the Gauchos’ offensive production has been a result of their younger players’ contributions as the freshmen have scored 13 out of UCSB’s 20 goals, a team well on its way to surpassing its mark of 32 goals in 2014. Of the 13 goals, Hromatko has really taken the lead in the attacking third.

“[These freshman] have not been intimidated by this new environment of college soccer,” Stumpf said. “Their ability to make adjustments on the fly and incorporate it in their games highlights their high [soccer] IQ. What we’re asking them to do in short order has been a pleasant surprise for us.”

Hromatko has started all 13 games at forward for the Gauchos tallying in a team-high six goals and four assists. Her six goals are tied for fourth place in the Big West.

Of the nine games that Hromatko has either scored or assisted UCSB has won seven contests. The freshman forward ranks among the top 10 in conference points, shots on goal percentage and game winners. Hromatko’s excellent performance has not gone unnoticed, earning a nomination for Big West Player of the Week three times this season.

“We’ve relied on a younger squad this year but they’ve really stepped up to the occasion,” said Fuertes. “It’s awesome seeing so many freshmen seizing this opportunity to help out the team.”

On the defensive end junior defender Sydney Fuertes has recently been the focal point for Santa Barbara’s backline. While individual stats don’t show it, Fuertes has helped the Gauchos’ defensive unit to a low .83 goals against average, good for third place in the Big West.

“[Sydney] has all those great qualities of leadership by example, said Stumpf. “She’s not the best athlete but she’s smart and can anticipate things so well.”

While Cal Poly is on a two-game losing streak, the Mustangs will be looking for another win against their rival. Hosting the Gauchos on Oct. 26 last season, the Mustangs used their home field to their advantage, scoring two early goals in the third and 14th minutes and securing a 2-0 victory.

Kreutz has quickly filled her role at the forward position for Cal Poly placing third in the Big West with seven goals. The freshman from Clovis has recorded a pair of goals in three matches this season, the last one coming off the Mustangs’ 7-2 victory over Hawaii on Oct. 4. Kreutz has been very disciplined in taking good looks at goal earning fourth place in the Big West with a shot percentage of .333.

Megan Aubutin is the main facilitator of the Mustangs, setting up teammates and tallying in five assists on the year. It will be the offensive production of Kreutz and savvy decision making of Abutin that UCSB must be aware of.

One final piece to the Mustang’s offense is senior forward Elise Krieghoff. Krieghoff has five goals on the year and 51 career goals during her four years at Cal Poly. Also a Clovis native, Krieghoff earned her ninth career Big West Player of the Week award after scoring one goal apiece in the Mustangs’ 1-1 tie against then No. 6 BYU and preseason top-25 team Pepperdine.

On the defensive end the Gauchos face arguably the best goal keeper in the Big West, senior Alyssa Giannetti. Emerging as the defensive leader for her team, Giannetti is one of the premiere defensive players in conference ranking in the top five in saves and save percentage.

“The challenge we face is it can’t just be something good to go in. It has to be special,” said Stumpf. “That’s what it’s going to take to beat someone like [Giannetti].”

Starting all four years for the Mustangs, the keeper from Yorba Linda has racked up 80 saves this season, 25 more than any keeper in the Big West.

UCSB will take on Cal Poly at Harder Stadium this Thursday. The match will kick off at 7 p.m.

A version of this article appeared on page 13 of October 15, 2015’s print edition of the Daily Nexus.