The Daily Nexus
News
Bike Safety On the Rise While Theft Decreases
October 15, 2015 at 5:00 am by Mohan Saxena 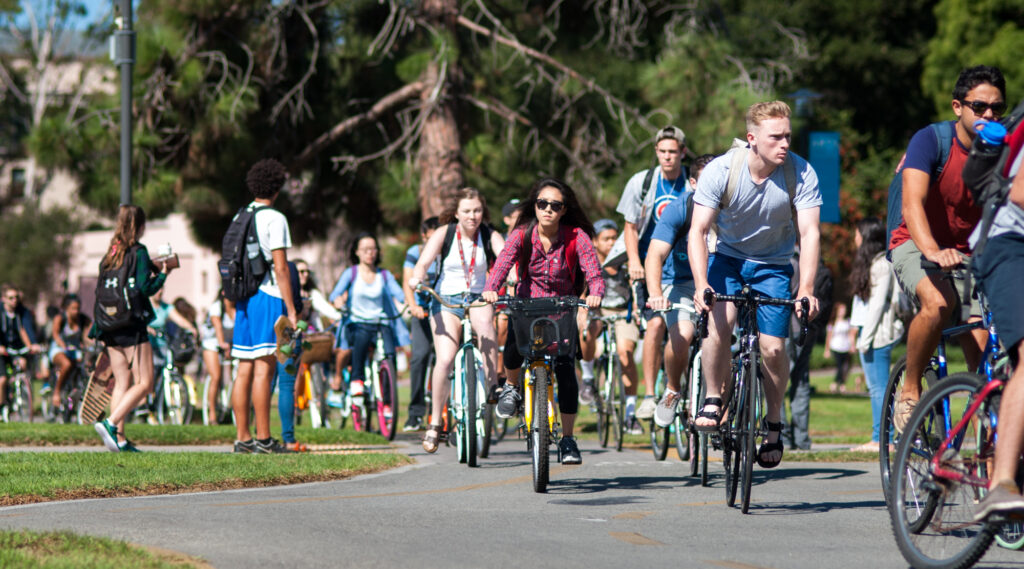 UCSB has over 15,000 bikes registered through the Community Service Organization Registration Program, and yet still manages to keep the campus a relatively safe biking and skateboarding environment for its sudents. Lorenzo Basilio/Daily Nexus

The biking situation at UCSB has been improving, with a reduction from over 300 reported thefts annually in 2010 to less than 200 thefts in 2014.

UCSB has over 15,000 bicyclists on campus, a third of which are registered by the Community Service Organization (CSO) bike registration program. Associated Students Bike Committee (ASBC) and Corporal Matthew Stern from UCPD, the designated bicycle and skateboard safety officer, are largely in charge of all things bicycle related on the UCSB campus, from registration to bike path maintenance.

First-year psychology major Stevi Ibonie said she bikes to and from class and has picked up on the bike traffic patterns in the three weeks she’s been on campus.
“I think that [bike paths] can be [crowded] at certain times of the day,” Ibonie said. “…people have a lot of 9 a.m.’s, so when you’re biking to your 9 a.m. class sometimes there’s a million people [on the paths] but then sometimes, when you’re biking back later in the day, like four or five, there’s not too many people and it’s kind of nice. So it kind of depends.”

Third-year biopsychology major Neha Nayak said she was recently involved in a bike accident on campus.

“I just got into an accident yesterday,” Nayak said. “I usually bike to campus [from Isla Vista] and then walk because I don’t like how crowded [the bike paths are]. But then I was walking, and he was going really fast, and I wasn’t looking that way, and he crashed into me, and we both got really hurt.”

ASBC chair and second-year economics and accounting major Tiffany Wu said ASBC updated its Facebook page to include safety information about campus biking tips. According to Wu, inexperience with biking in crowded places and incorrect bike etiquette are the biggest causes of inefficiencies and accidents.

“Biking was pretty hectic in the first few weeks when there were [first years] coming in and learning how to bike and how to navigate the bike paths,” Wu said. “Mostly, I feel like there’s not really a tradition of using hand signals at UCSB. That’s why we’re trying to navigate our committee towards a more educational path.”

Stern said the biking “culture” has changed compared to when he biked on campus as a student.

“Biking is what I did primarily when I came here,” Stern said. “I was also a CSO so I was on bikes pretty much 40 hours a week on campus. When I went to school here, iPods weren’t popular yet — nobody could afford them — so nobody had headphones, nobody had phones and people would actually have conversations on the bike lanes.”

According to Stern, there is an alternative program for students who receive citations for breaking a bike-related law to attend a bike safety class for $35 instead of paying a fine upwards of $200.

“When I was in school, we didn’t have the option of taking a class; we had to pay the whole fee of the citation … It wasn’t effective in terms of educating people,” Stern said. “We’re not out there to penalize students, we just want to make the environment safer for everybody.”

“A bike that’s unregistered that is reported to a law enforcement agency statistically has about a one percent chance of recovery,” Stern said. “Bike registration is required on campus by law, and that’s primarily why it’s so effective. If I can get 100 percent compliance, I guarantee you we’d be recovering more bikes.”

According to Stern, he is planning a new committee to reduce bike theft throughout Santa Barbara County.

“It started off informally, and it grew into a bunch of concerned community members,” Stern said. “We’ve got people from law enforcement from the sheriff’s department and the city of Santa Barbara, along with some bicycle retailers and some county personnel.”

Stern also said he is planning a campaign in March tentatively called “Dude, Where’s My Bike?” and plans to use GPS bait bikes set around campus posed as normal bikes, which law enforcement will use to apprehend perpetrators if the bikes are stolen.

“The idea is it’s a full month campaign during bicycle safety month,” Stern said. “[We’ll] operate our GPS bait bikes… do a sweep of the entire campus and bicycle racks, recover as many stolen bicycles as we can and identify as many thieves [as we can].”

Stern says the most important thing in bike safety is to be aware of your surroundings when biking and to follow the rules of the road.

“If [bikers] make a conscious effort to pay attention to their surroundings and maybe take things a little slower than they normally would, then I think that would really reduce bike accidents,” Stern said. “It’s a misconception that bicycles always have the right of way … In Isla Vista, [in] more than 90 percent of bike [and] car accidents, the bicyclist is actually found at fault.”

If you have any questions bicycle or skateboard related, email Corp. Stern at matt.stern@police.ucsb.edu.

Read about more about bike safety tips at facebook.com/UCSB.BikeComm.

Report any your lost bicycle or any information about a stolen bicycle to UCPD dispatch at (805) 893-3446.

I am the media coordinator for UCSB A.S. Bike Committee and I thought I would share our information so you can all stay updated with bike-related posts!

Please clarify how many bikes are on campus. The article states, “UCSB has over 15,000 bicyclists on campus, a third of which are registered by the Community Service Organization (CSO) bike registration program.” However, the photo caption contradicts this, stating, “UCSB has over 15,000 bikes registered through the Community Service Organization Registration Program.” Which is correct?