The Daily Nexus
Opinion
Send Silence Packing: A Conversation Overheard
October 14, 2015 at 11:15 am by Sabrina Hodjati 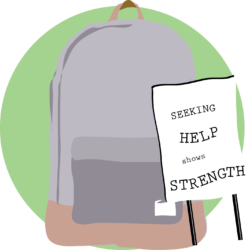 When I walked out of Pardall Tunnel this morning and took notice of the display of backpacks on the SRB lawn, I was immediately struck with emotion. We hear the statistics of college depression and suicide very often and are made aware of the campus efforts and resources to help us cope with mental health issues on an increasingly regular basis. We also hear of campus suicides with such alarmingly high regularity that we’ve grown somewhat numb to them. But the Send Silence Packing display struck me because it eliminated the numbing factor: anonymity. The backpacks are each accompanied with the face, name and story of an actual college student who committed suicide in recent years, and it is impossible to ignore the utter normalcy of these names, faces and stories, to ignore the realization that they truly were just one of us. I stopped to take a photo and read a few of the names, and several students besides me stopped to do the same. Standing amidst the backpacks, we all communally participated in a small, albeit poignant, moment of mourning, of remembrance, of realization that we must practice tolerance and awareness. As I began to walk away from the display to get to class, my silent contemplation and uneasiness was interrupted by a conversation between two students.

“The amount of college students who get counseling is, like, higher than ever before. I think America’s mental health is just decreasing exponentially.”

“Yeah, or we’re just a bunch of pussies.”

The students shared a laugh over that last statement while I stood in shock at the ignorance and the audacity it takes to loudly spout stigma about students who seek counseling while walking directly past a physical representation of the disheartening amount of college students who die of mental health and stress-related issues each year. They continued to joke about counseling, about the abundance of “stupid reasons” for which people go to counselors and, at the height of their stupidity, about how “there’s a weird negative connotation towards counseling.” These two bright scholars managed to identify that there is a stigma towards negativity, all the while contributing tremendously to that negativity themselves. Genius.

After listening to the two of them go on like this for a few more minutes, I turned around and confronted them, telling them that it’s incredibly insensitive to ridicule counseling and depression, and especially insensitive to do so in front of the visual representation of 1,000 of our peers who we’ve lost to suicide. One of the students simply turned away from me while the other sputtered out a sorry excuse for an apology. Less than 30 seconds later, they uncomfortably giggled and made sure to put a good 20 feet of distance between us. While I’m glad to have (maybe) inspired at least some discomfort and self-awareness among two intolerant students, my exchange made me more aware that my peers aren’t nearly as kind and understanding as I previously thought them to be. And whenever something discriminatory or derogatory happens at one of the UC campuses, which are all lauded (or, in some cases, ridiculed) for being inclusive and liberal, chances are the issue is equally or more disturbing at college campuses around the nation.

Attitudes like those of the two students are the reason people shy away from talking about going to therapy, and a big contributor to why so many in need may never receive counseling at all. All colleges, but especially more selective colleges, harbor a poisonous culture in which stress and lack of sleep are points of pride, and in which students neglect to slow down and get help in favor of posting another 3 a.m. Snapchat story of themselves and their friends “dying at the library.” We brag about how much work we have to validate our intelligence and probably to make our peers feel lesser for not having worked as hard. Deprivation is gain, and happiness and relaxation are indicative of laziness and decreased chances of getting into that good med/law/grad school or post-grad job. Add to this toxic academic culture the beliefs of many of our parents that depression isn’t real/is an excuse/is something you can get over, and the culture of hyper-masculinity that cultivates repression of emotion, and there’s no wonder that the number of backpacks only increases every year.