The Daily Nexus
Opinion
You Can’t Call Yourself an Environmentalist if You’re Not Vegan
October 13, 2015 at 6:00 am by Jordan Metz 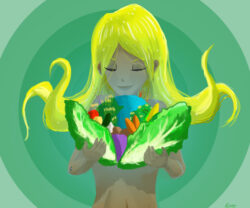 You’ve probably met a smug vegan before. The kind of vegan that revolves their entire life around the fact that they consume no animal products and tries to make you feel like a terrible inhabitant of our planet if you do happen to eat animal products. If you haven’t, well, that’s me. Sometimes.

I’ll be honest, being vegan is a challenge sometimes, and can be extremely inconvenient. But I didn’t make this change overnight. I’ve been a vegetarian for intermittent periods of years throughout my entire life. After nearly four years of eating a mainly animal-based diet, I felt and looked extremely unhealthy. I never had any energy, I had horrible acne and I gained a lot of weight. I didn’t feel like myself anymore, so when a close friend started telling me about veganism and its benefits, I thought I’d look into it a bit more.

I think where I tend to differ from your average PETA activist is that the animals really aren’t my main reason for making this drastic lifestyle choice. In fact, they are probably near the end of my mental list of motivators when my willpower beings to falter. Besides the endless list of health benefits, I made this choice a few months ago to protect our environment and do something about global warming.

In case you have been living under a rock or are completely unconvinced by sound science, global warming is a huge problem that has caused melting of the polar ice caps, an increase in sea level rise and increased precipitation worldwide (National Geographic). There are a hundred other negative effects of climate change, but they are far too detailed and extensive to explain in one article. Unfortunately, most people’s knowledge ends where animal agriculture enters the conversation. Media tends to demonize fossil fuels and scapegoats the transportation industry as the main contributor to climate change. However, 51 percent of global greenhouse gas emissions are due to livestock and their byproducts, while the global transportation industry contributes only 13 percent of greenhouse gas emissions (WorldWatch).

We are constantly emitting poisonous gases into our atmosphere while simultaneously destroying the natural habitats that can process these gases into the clean air we need. The biggest target: The Amazon rainforest. The number one cause of this deforestation is human development of the land, most of which is for the raising of cattle. 136 million rainforest acres have been cleared for animal agriculture (Monga Bay). As the animal production industry grows with the world’s population, it will continue to produce larger amounts of greenhouse gases at the same time as it destroys the world’s ability to eliminate them.

When water conservation enters the equation, these interest groups tend to focus their energy and money in the wrong places. We’ve all heard these tips from our local government before, especially if you are from California: don’t water your lawn when the sun is out, take shorter showers, fix leaks as soon as possible, turn off the faucet while you brush your teeth. While all of these small actions are important and necessary, they become negligible when one considers the water used to produce animal products. One pound of beef expends 2,500 gallons of water, and one gallon of milk requires 1,000 gallons of water. Only five percent of US water consumption comes from domestic use, whereas animal agriculture uses 55% [[percent]] (Water Footprint Network).

So why are the environmentalists staying silent about this issue? Why isn’t our government leading the conservation to where we need it most?

Going up against one of the largest industries in the world can be frightening and ineffective. The public cannot see the damage of raising animals for food. But it is so easy to blame transportation. We see a semi-truck with dark grey smoke billowing from its exhaust pipe and smell the burning diesel fuel and we know it’s bad for our environment. That just doesn’t happen when we witness animal agriculture. We pass a cattle factory, we see thousands of animals in a congested space, we smell the intense concentration of methane and we fail to make the same connection.

There is a huge disconnect in our society in understanding who controls the media and how they direct public attention. Media no longer reflects the views of society; it tells society what to think about. If the environmentalists really wanted to initiate a change in the way our society treats the world, they need to talk about the impact animal production has. Advertise it. Focus public attention on this issue and, more importantly, live the lifestyle themselves. Eating a vegan diet reduces your carbon footprint by 50 percent.

We can change the world, but we need to be the change. Our world is suffering from the effects of animal agriculture. Think of the natural world — the oceans and rainforest. Oh, and if you care about the lives of animals, that’s a pretty good reason to go vegan too. As the farmer and animal rights activist Howard Lyman said, “You can’t call yourself an environmentalist and eat meat. Period.”

Additional information and complete citations of research can be found at http://www.cowspiracy.com/facts/

Howard Lyman was not much of an ecologist. The vegan mantra, as it stands today, is only marginally better than an omnivorous diet in terms of environmental impact and animal death. In fact, in at least two regards it may be considered a step backwards. To begin, veganism eschews the sustainable consumption of wild fish and game. Ironically, given that any animal taken from the wild is immediately replaced by another that would otherwise perish for lack of resources. Nature always breeds more animals than habitat can support, and the consumption of the surplus has no impact on animal populations… Read more »

In a small, rural, community with sustainable poultry (wild turkey) or wild fish, meat eating would be sustainable. However, in our industrial society and the ever-increasing appetite for meat and dairy is not sustainable. Organic agriculture, home gardening and canning, local produce and water reclamation is the future of food. The argument on vegan cheese for example, if a person is eating that they are likely NOT eating a pound of meat with that and not eating the cheese at EVERY meal. Three times a day. You’ve completely thrown the baby out with the wash water. Further, IF people reduce… Read more »

Some good points in this article but why do you say you don’t care about animals? Animals feel pain, fear, and complex emotions. They have relationships and individual personalities. They suffer exactly as we do. If you say you don’t care about animals, I cannot help but wonder is this because you are unable to feel empathy? Please widen your circle of compassion to include animals, and add animals to the thousands of reasons that exist for going vegan. Being vegan is about reducing suffering of others and trying our best to leave the lightest possible footprint possible on our… Read more »