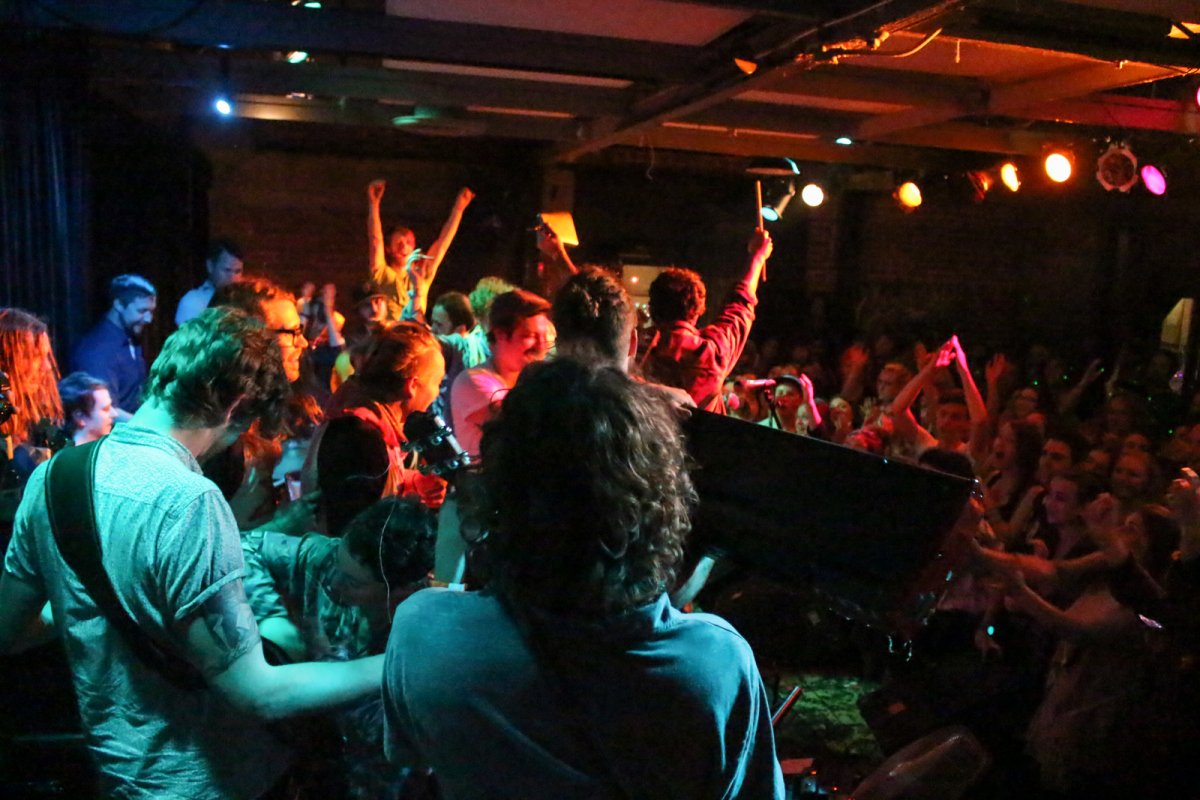 Tucked away from plain sight on State Street, SOhO Restaurant and Music Club guests could be heard rocking out before Wild Child’s Friday night event, starting at 9 p.m. SOhO’s convenient layout made migrating between the stage and bar a painless endeavor.

Flower Punks were the openers of the evening. Wasting no time to show us exactly what they were working with, the two lead singers, Magen Buse and Marina Staley, jumped right into their first song. The duo simultaneously harmonized and showed their guitar chops with intricate riffs pumping the crowd with energy almost instantly.

A few songs into the set, the Punks performed one of their hits, “Riff Raff.” As the title promised, the song was so funky and rock heavy at the same time that you could not help but bob your head back and forth. Dan Szmurlo, a graduate student at UCSB, thought, “the incorporation of the horns, throughout their set, was fantastic. I wish they would have played longer.”

Donning the overalls, Buse and Staley were more than happy to talk to me about their music after their set. During our conversation I found them to be completely engaging and loving the atmosphere at SOhO. I learned that they have known Wild Child for quite some time and when asked to describe Wild Child’s music they quickly responded, “rootsy full rock”. Before leaving me they gave me a copy of their EP, which, in the span of a night, I have already devoured, and the promise that a full album was only a couple months away.

Max Frost, the next supporting act, continued to supply the rocky feel of the night by jumping from song to song effortlessly. Frost’s cover of the iconic Police song, “Roxanne,” was thoroughly impressive. The crowd went crazy after he belted out the last note collectively showing how much they all enjoyed his set.

After he was finished I went up to continue our conversation from earlier. Asking him how he enjoyed the set he replied, “The vibe has been amazing. The crowd definitely brought it tonight.” I am sure the crowd was thinking exactly the same thing about him and Flower Punks.

Soon after the stage is vacated the members of Wild Child picked up their instruments to take their respective spots on stage. Quickly playing their first song, the band hooked the crowd instantly. Filling the room with a melodic ‘da, da, da’ from both the lead singers and the accompaniment of the violin, the atmosphere shifts from that of a funky rock nature to one of playful folk. Quickly moving from songs of slow tempo to ones with a much quicker pace, they kept the audience on their toes as they waited for the next musical surprise around each lyrical turn. Their harmonious sound filled the entire venue, moving the crowd together.

Before finishing their set a loud, “This was amazing! Thank you guys!” was shouted from the stage, resonating through the crowd below. From start to finish the show did not disappoint. Each act brought something a little different for the guests to enjoy and did not make them wait to long to hear the next set. If you’re looking for a show to see, I’d invite you to check out Flower Punks, Max Frost and Wild Child whenever you can!