The Daily Nexus
Water Polo
Solid Showing for UCSB at SoCal Tournament
October 12, 2015 at 9:14 am by Jorge Mercado 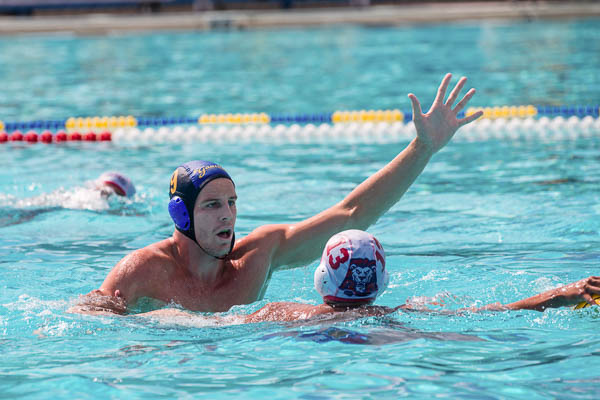 Reed Cotterill keeps the attacker from pushing in towards the cage. Eric Swenson/Daily Nexus

The No. 6 UCSB men’s water polo team had an average weekend at the KAP7 So Cal invitational, going 2-2 overall and finishing sixth in the overall standings.

The identical win/loss total from the tournament left the Gauchos with an overall record of 11-6 and 0-2 in MPSF conference play.

Santa Barbara’s final match of the weekend was a battle for fifth place against No. 5 Pacific. The two teams had met a week prior with Pacific being the victor in that match. The Gauchos were up 1-0 after the first period thanks to the goal by senior Nick Jordan. However, the Gauchos gave up six goals in the second quarter and found themselves down 6-3 at half.

Shane Hauschild, who had an absolutely brilliant tournament, scored a total of six goals on Sunday, with three against Pacific. However, the sophomore attacker was not enough to overcome a dominant Pacific team, which added six more goals in the second half to beat the Gauchos 12-5.

Before a disappointing finish, UCSB had played a great match against No. 8 LBSU. The Gauchos were down 3-2 after the first frame but were able to rebound and go up 4-3 at the half. The tie-breaking goal was made by senior attacker Derek Shoemaker, which gave UCSB its first lead of the match. From that point on, the Gauchos never let go of the lead given to them by their senior attacker. Helped by Hauschild’s three goals, UCSB was able to pull away in the second half and win the match 12-6.

The Gauchos had a seemingly identical outcome on Saturday as they did Sunday. Just as UCSB finished Sunday night with a disappointing result, the same happened one night prior against No. 2 USC.

The quarter-final match started off very one sided. Led by junior Blake Edwards’ three goals in the first half, USC was able to establish a good 6-1 lead late in the second. Despite the slow start UCSB picked up its pace, scoring two goals in the final two minutes to make the score 6-3 at the half.

Jordan’s two goals and junior attacker Mitchell Hamilton’s goal in the third frame helped cut into USC’s lead and made the score 8-6. The Gauchos fought hard in the fourth but they could not cut any deeper into the Trojans’ lead. A great three-goal performance in the second half by sophomore Grant Stein proved to be too much as USC held on to win 10-8.

Just like Sunday, before a tough loss to one of the best teams in the country the Gauchos were able to pull off a great performance against No. 15 UC San Diego.

The Tritons’ senior Chase Cockerill started the scoring with a goal 30 seconds into the game, but the Gauchos came back firing on all cylinders, scoring four goals in the first frame all by different players to take a 4-2 lead. Santa Barbara and UC San Diego each scored two goals in the second period to make the halftime score 6-4. Hauschild added both goals for UCSB in that second quarter.

The Gauchos started the scoring in the second half with two early goals courtesy of junior utility Reed Cotterill and junior utility Tor Jensen. Just as UCSB looked to run away with the match the Tritons were able to add their own two goals and make the score 8-6 heading into the final frame.

UCSB ended the game against UC San Diego the way they started — firing on all cylinders. The Gauchos scored four goals in the fourth, again each by different players, while only allowing two to win the game 12-8. Senior goalkeeper Chris Whitelegge also had a tremendous game, tallying up 16 saves for the Gauchos.

Santa Barbara did not finish the tournament winners; however, it was not a completely disappointing effort. The Gauchos were able to improve upon their performance last year in this tournament and really saw their stars like Hauschild, Shoemaker and Whitelegge shine at certain points.

UCSB will face off against a team they beat in this invitational, LBSU, in Long Beach on Saturday at 12 p.m.