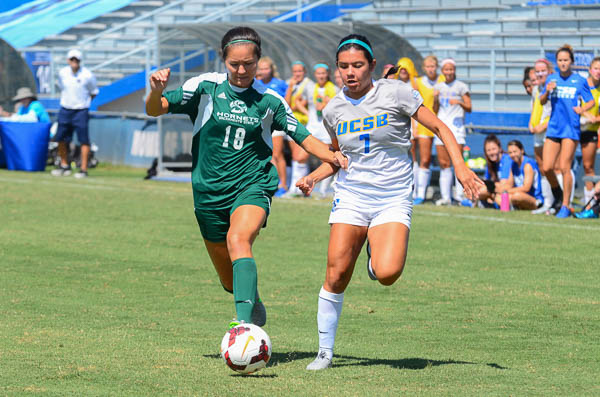 Missed opportunities at goal and an inability to score summed things up Sunday for the UCSB women’s soccer team as it fell short in its conference home opener to Long Beach State 1-0.

“Scoring is the hardest part of the game,” Head Coach Paul Stumpf said. “We try to create as many chances as we can at goal, but sometimes it’s just not enough.”

The loss puts UCSB at a record of 8-4-1 on the year and 1-1 in the Big West. Long Beach moves to first place in conference with the win, hosting a record of 2-0 in league play.

A promising first half was in store for Santa Barbara as sophomore forward Amanda Ball, sophomore midfielder Chace Schornstein and freshman forward Mallory Hromatko each had a shot on goal. The trio combined for three of UCSB’s five shots in the half.

The Gauchos’ best opportunity in the first period was a corner kick in the 10th minute as Schornstein sent a header towards the back of the net only to be snagged by Long Beach goalkeeper Ashton McKeown.

McKeown has been a force behind goal for the 49ers, leading the Big West with a save percentage of .877. The junior from Huntington Beach, CA has recorded ten saves in her three previous Big West appearances, adding five more in Sunday’s contest.

“It was a combination of [missed scores] and [a] very good goal keeper [at] play in today’s match,” Stumpf said. “We had one good look at it [in the first half] but [McKeown] made one great save.”

Despite an aggressive 45 minutes of controlling possession 59 to 41, Santa Barbara went into halftime locked in a 0-0 gridlock.

“We took the ball away from them and created more chances than [Long Beach] did, but just didn’t stick one away,” Stumpf said.

The Gauchos kept an aggressive tone starting the second period as two yellow cards were issued in the first 10 minutes to junior defender Sydney Fuertes and junior midfielder Sara Feder.

In the 52nd minute Feder responded on the offensive end, cutting past the 49er defensive line and sending a kick from 15 yards out, but it ricocheted out of bounds.

Still locked at zero, the Gauchos had another chance in the 67th minute from sophomore defender Kate Shoemaker. Schornstein found Shoemaker off a free kick and Shoemaker headed the ball just to the left of the net. A diving save, however, from the 49ers’ McKeown kept her team alive and the match at a stalemate.

The game ultimately came down to the 76th minute as Long Beach State’s Vania Robles moved her way into the box and popped the ball over the UCSB backline for sophomore forward Ashley Gonzalez.

Although Gonzalez was met at goal by junior goalkeeper Jacq Caginia, a quick in-and-out move from the reigning Big West Freshman of the Year sent the ball down the line to the left corner of the net. This gave the 49ers a late 1-0 edge with 15 minutes remaining in regulation.

“We made one mistake in the back and paid a massive price for it,” Stumpf said. “Against a good team like Long Beach you have to play mistake free and unfortunately we just didn’t do it.”

Gonzalez has racked in six total goals on the year. The Ontario, CA native has been the X-factor since the start of the Big West for Long Beach, burying a game-winning overtime goal on Oct. 4 against defending Big West champions Cal State Fullerton. Gonzalez’s exceptional conference play also earned her the Big West Player of the Week award.

As the Gauchos move to an even .500 in conference, junior Sydney Fuertes believes there are positives to take out of this tough match and this young team.

“We definitely executed our game plan [today] all but finishing,” Fuertes said. “We dominated possession in the first and second half, but it was just a matter of someone making a play … our team worked till the end and now we know to put games away early.”

The Gauchos renew their blue-green rivalry against Cal Poly this Thursday.  The match will take place at 7 p.m. at Harder Stadium.