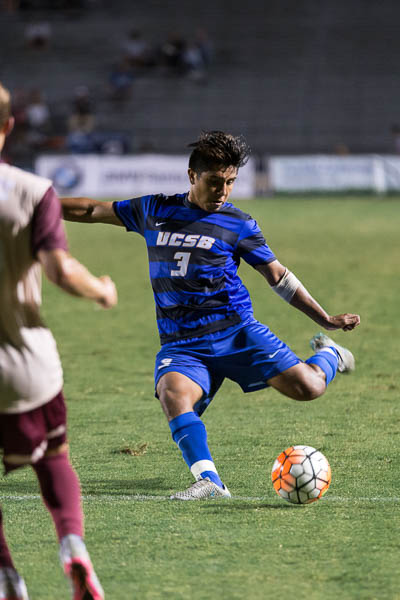 A successful pair of games on the road last weekend has made the UCSB men’s soccer team one of only two teams in the Big West to start a perfect 2-0 in conference play. This weekend, the Gauchos return home to welcome UC Riverside and the only other 2-0 team in Cal State Fullerton.

“It was a great weekend playing what I think are two really tough teams on the road,” Head Coach Tim Vom Steeg said. “But, as we know, last weekend doesn’t matter if we don’t take care of this weekend. We have to continue doing what we’ve been doing over the past four weeks now and find a way to win conference games.”

For the Gauchos, every week has seemed to tell the same story for quite some time. The name of that story? Nick DePuy.

UCSB’s offensive front man has so many scoring streaks and statistical anomalies going for him right now, it’s hard to keep track. With a brace in his last game and three goals in the conference’s opening weekend, DePuy earned his second career National Player of the Week award and second consecutive Big West Offensive Player of the Week.

“What he’s doing right now is really remarkable,” Vom Steeg said. “It’s been one of the best runs we’ve had out of any forward. One of the huge advantages this year is he’s got players around him that can give him the ball. We have players around him that are dangerous and that can score, so that means [the defense] can’t really concentrate all their energies on one player.”

The junior has now scored in three consecutive games, giving him a Big West leading total of 10 through just 11 games, which matches his 2014 total. Since moving to forward from the midfield last year, he has compiled 19 goals in 24 games. In UCSB’s 15 wins during that stretch, DePuy has scored 11 game-winners. His total of five game-winners in 2015 has him in the top five in the nation.

Backing him up on the offensive front has been a pair of first-year Gaucho forwards in sophomore Ahinga Selemani and freshman Geoffrey Acheampong. Selemani has 34 shots to his name this season, good for second in the Big West behind DePuy’s 38 and is second on the team with three goals and eight points. Acheampong is currently tied for first in the conference with four assists to go along with two goals of his own to match Selemani with eight points.

On the defensive side, goalkeeper Justin Vom Steeg has been strong in the net for the Gauchos. The freshman ranks fourth in conference with a .99 goals against average that has given him an excellent record of 7-2 through his first nine career starts.

As a team, the Gauchos are undefeated in their last seven conference games dating back to last season, excluding the postseason. They are off to a 2-0 start for the second consecutive season.

Last year, the Gauchos nearly missed out on the No. 1 seed after going winless in their first three conference road games, but they pulled together to either win or tie their last five games to clinch home-field advantage throughout the playoffs. With their first two conference wins of 2015 coming on the road, they are in excellent shape to earn a No. 1 seed in the Big West Tournament for the third-straight season.

UCR travels to Harder Stadium today hoping it can win, or at least repeat the result it managed against the Gauchos last year. Playing on their home turf, the Highlanders frustrated and held UCSB to a 1-1 tie through 120 minutes. Playing at Harder Stadium this time around, Santa Barbara can expect a much different result.

Riverside possesses the conference’s second-best goal-scorer of the year in Norberto Ochoa. The redshirt senior forward has notched seven scores thus far, helping UCR to a third-best ranking in the Big West with 18 as a team. This is a big improvement compared to last season when the Highlanders managed just 21 all season.

CSUF comes to town on Saturday coming off a game at Cal Poly tonight. If both the Titans and the Gauchos come away victorious tonight, then Saturday’s match will be a battle between the only two teams in the Big West to start 3-0.

“What Fullerton has done in each of their games is kind of hung on, frustrated the other team and then found a way to score a goal,” Vom Steeg said. “I don’t think they’re going to come here with any intentions of running up and down the field with us. I think they’re going to try to maintain a good defense, put lots of players behind the ball and see if they can get something on a set piece or a breakout.”

The Titans are led on offense by sophomore midfielder Diego Sanchez, who has five goals this season, and freshman forward Brandon West who has tallied three assists. Both marks are good for third best in the conference.

Fullerton has been especially good on the defensive side since the start of September, earning six shutouts in its last nine games. The Titans rank second in the conference in goals against average, allowing just .91 goals per game, compared to UCSB’s third-best mark of 1.15.

Junior defender Zach Bryan was largely responsible for the team’s great start to conference, leading the defense in last weekend’s 2-0 and 1-0 wins over Sacramento State and UC Davis, respectively. His efforts earned him the first Big West Defensive Player of the Week honors of the conference season and the first of his career.

Santa Barbara will still be without junior left back Ismaila Jome, who has missed the last five games with an ankle injury. After trying to play through an injury since spring, junior midfielder Drew Murphy has been ruled out for the season after deciding to have surgery on his ankle.

UCSB is set to take on UCR at 7 p.m. tonight at Harder Stadium before hosting CSUF on Saturday at the same time.