The Daily Nexus
News
Students Represent Both Sides on Pink Out Day
October 8, 2015 at 5:00 am by Zareena Zaidi 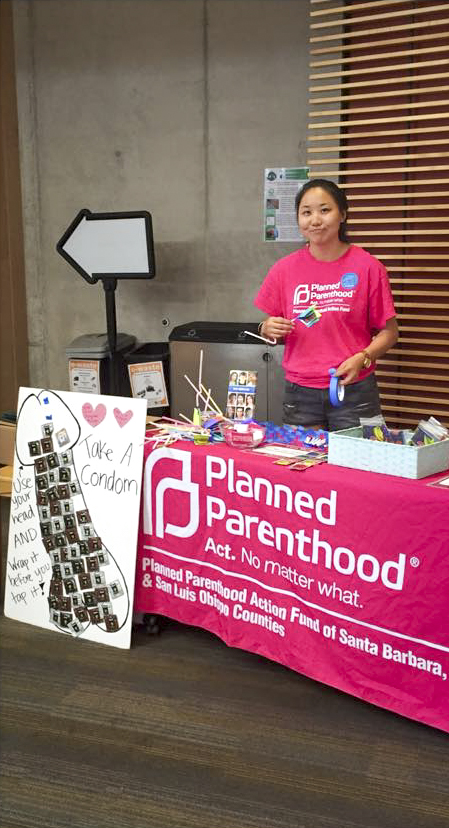 Planned Parenthood’s UCSB chapter Generation Action, a student-led advocacy group, has been increasingly active in the wake of congressional aims to federally defund the organization.

The campus chapter tables and hosts events to educate the community about reproductive health and rights. Planned Parenthood Generation Action lobbied in favor of Assembly Bill 329 (AB 329), authored by Assemblymember Shirley Weber, which passed into law on Oct. 1 and aims to strengthen sex education and HIV/AIDS prevention. On Sept. 29, members tabled for Pink Out Day of Action, a nation-wide movement to spread information about the services Planned Parenthood provides such as cancer screenings, sexually transmitted disease testing and birth control.

“We had our students taking a lead talking to our legislators about the importance of this bill,” Fischer said. “We teach them how to organize their communities and how to talk to elected officials and how to develop their own leadership skills in the reproductive justice movement.”

“I got the chance to lobby to representatives of our California senators and to California congresswomen and that was really inspiring,” Pember said. “It was amazing to share my story with politicians and really feel like I was making a difference.”

“I appreciate their effort and any effort to increase student awareness about birth control and sexual health issues,” Menemenlis said.

Students for Life UCSB president and fourth-year economics major Katie Devlin said Students for Life tables on campus and encourages students to consider alternatives to abortion, providing them with resources to make their decision.

“We table on campus to raise awareness about abortion and let students know that there are alternatives to abortion,” Devlin said. “We have a list of resources to give to pregnant students to help them, and we work to provide a safe and supportive community.”

Second-year anthropology and psychology double-major Lauren Van Oeveren said it is positive for both organizations to educate the community.

“I think it’s cool that people are sharing their knowledge or beliefs so that people can form an opinion,” Van Oeveren said.

A version of this story appeared on page 8 of the Thursday, October 8, 2015 print edition of the Daily Nexus.

Great article. What I really like is that it represents both sides of the issue.