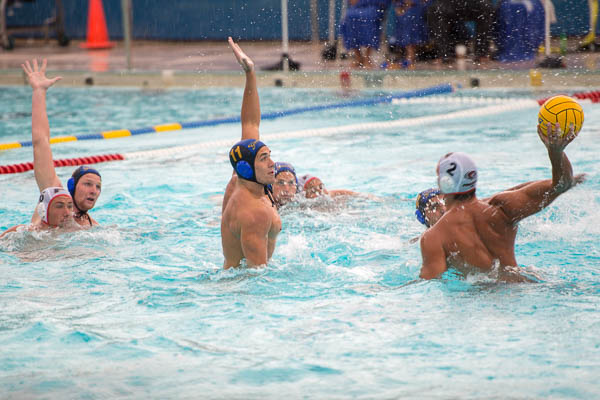 After two upsetting home losses, the UCSB men’s water polo team will look to bounce back as it travels to Malibu, California for the KAP7 Southern California invitational this weekend. Santa Barbara, the No. 6 seed in the invitational, will face off against the No. 11 seed, UC San Diego, in its first-round matchup Saturday.

The Gauchos are looking to regain some confidence after losses to two great teams, California and Pacific. The defeats set them back to a 9-4 overall record and started them off with a 0-2 record in conference play for the second straight year.

Santa Barbara also wants to improve upon its disappointing eighth place finish in this same invitational last year. UCSB started strong, beating Pepperdine in its first-round matchup, but lost its final three matches of the tournament.

“We want to be able to compete against these top teams that’s the goal,” Whitelegge said. “These are the games you really have to fine tune what you’re doing.”

The Tritons have an overall record of 6-7 and are 1-0 in WWPA conference play. They are coming off an embarrassing 17-8 loss to UC Irvine.

“They are a crafty team,” senior attacker Derek Shoemaker said. “They are always very tough to guard, we won’t take them lightly.”

Alexander, a 2014 WWPA all-academic recipient, has scored his fair share of goals with 17 on the season and is the leading assist man for UCSD with 26.

The last time these two teams met was one year ago in this very same tournament. The Tritons were the victors in that third-round matchup with an impressive 9-4 win and finished sixth overall.

In order for UCSB to get any type of revenge it will need perfomances from its top players. Senior goalkeeper Chris Whitelegge has been a dominant force for the defense averaging 10.2 saves per game. On the offensive side, sophomore attacker and 2014 MPSF Freshman of the Year Shane Hauschild will look to add to his team high of 21 goals with help from senior attacker Derek Shoemaker and his 18 goals.

Another player to watch out for is freshman driver Borislav Jovanovic. The young Serbian driver is third in goals scored for UCSB with 16 and scored an impressive two goals against California on Saturday.

“On offense we need to be less selfish and play a little smarter.” Shoemaker said. “We take pride on having a lot of guys that can shoot and score. We don’t have two guys that score five goals we have five guys that can each score two and that is just much harder to guard.”

The big drop in intensity is something that must be addressed if the Gauchos want to come out of this tournament victorious. Fans will have to see if the Gauchos’ intensity can last for all four periods of their four matches this weekend.

“We want to be able to play four quarters as opposed to three.” Whitelegge said. “The problem was not being out of shape, the game was tough and we just lost momentum. If we can limit our mistakes than we won’t always be in such close games where fatigue could set in.”

The invitational will be hosted by Pepperdine and the UCSB Gauchos are set to play UCSD at 12:00 p.m.