The Daily Nexus
News
An Inside Look at the Roles of SB Peace Officers
October 8, 2015 at 8:29 pm by Peeka Zimmerman 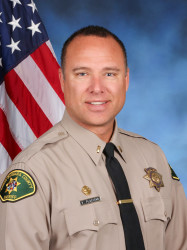 IVFP was initiated in 1970 as a substation of the Santa Barbara County Sheriff’s Office (SBSO), patrolling I.V. under the SBSO’s primary jurisdiction over the diverse community. UCPD works alongside IVFP to represent the university’s interest in matters of law and safety in I.V. while also patrolling the approximately 1,000 acres of UCSB’s campus, maintaining 24-hour uniformed patrol and police response.

“We all have the same peace officers powers of the state,” Calderon said. “It is just that those officers that are assigned to the campus only work on the campus during that time period. Isla Vista, this particular community, is an unincorporated area of Santa Barbara County, so [IVFP] handles all of the emergency calls for service.”

There are currently seven officers from UCPD both patrolling campus and working in I.V. alongside IVFP, according to UCPD Sergeant Robert Romero.

“That is on a rotational basis, so once every year and a half, two years, an officer will leave the campus patrol station and go work eight months to a year out at Isla Vista,” Romero said. “They are the ones that are really the heart and soul of the department.”

Calderon said IVFP responds to crimes such as burglary, theft, battery and assault, but not traffic accidents, which fall under the California Highway Patrol’s jurisdiction.

“We don’t handle the traffic enforcement out here — that is still Highway Patrol — they’re still responsible for handling traffic accident investigations, things like that,” Calderon said. “But we can still pull people over — issue citations for speeding, stop signs we can still make arrests for drunk driving and things like that — it is just that that is not necessarily our primary duty.”

Romero said UCPD hosts safety presentations for students, especially those living in residence halls, and collaborates with them on solutions to solve public safety issues.

“We go to different functions that residential life might be putting on,” Romero said. “These interactions we have with students is, basically, we talk to them about things on how to be safe and they talk to us about what they like, what they don’t like from their police department. So it is an exchange of ideas and how to come up with a better plan on how to keep the community safe.”

Calderon said any student or I.V. resident can join IVFP deputies on a walk-along to experience a day in the life of an officer.

“From a UCSB student’s perspective, there is just a bunch of cops walking around. Do you know what they are doing?” Calderon said. “That is why I encourage people to do walk-alongs so they can kind of see and point out the problems that we try to tell people about.”

According to Calderon, IVFP deputies are trained to use “tactical communication” skills when dealing with “chaotic” scenarios.

“When they get hired they are on a field training program,” Romero said. “Besides learning how to do a proper car stop, how to search somebody properly, how to place somebody into custody, we also teach them how to interact with our community, things to look for, how to be an active listener.”

“We are trying to make sure that everybody enjoys their time here out in Isla Vista and we know that they are away from home and a lot of people are away from home for the first time,” Calderon said. “It is not our greatest goal just to write people tickets for open containers of alcohol.”

According to Calderon, deputies prosecute people for wrong-doings to prevent them from repeatedly acting out.

“We try to prosecute that person because what we found is that when people do that to somebody — when they harm them physically, sexually assault them, that kind of thing — that almost empowers them to where they think that they can do it again and keep doing it in our community,” Calderon said. “That is why we have these people who are repeat offenders.”

“We try to hire people here at the police department that are customer service oriented, community oriented. And when we are doing the hiring process, even some of the interview questions for getting a job here at the police department, we ask them about how do you feel about community-organized policing, can you define it for us, what does it mean to you?” Romero said.

“I started this business when I was little bit older, I had already had another career completely. I started this in 2002; I came on board with the Sheriff’s office but I had already done some other things,” Calderon said. “Essentially we want to make sure that the officers and deputies assigned here are mature.”

“They do a fabulous job of going into the community, because their peers are the students,” Romero said. “They also are an extra pair of eyes and ears for any trouble that is going on in the university campus or Isla Vista.”

Romero said the number of officers at the UCPD station, which includes an investigation unit and dispatch center, will likely soon increase.

“Currently we have 36 sworn police officers, however, that number is going to grow probably another 10 here in the near future,” Romero said.

First-year communication major Mable Truong said she did not know the difference between IVFP and UCPD, and previously was not aware of the CSO program.

“I would be one of the people that are confused,” Truong said. “I think I have an idea of what they do — they are the people that bring you around at night … then I just saw them last night so I thought that was really cool, and they seem really friendly, too.”

Second-year biology major Elizabeth Del Rincon said she feels safer on campus and in I.V. with a visible police presence.

“Just if something bad were to happen, I feel like they would be there to go and help,” Del Rincon said.

Del Rincon said she believes it is important for officers to receive training on how to work with students.

“They are around students all the time so I feel like if they were to receive training it would be better,” Del Rincon said. “I see them especially at night escorting people to their dorms and stuff and I think that is really good.”

“It makes you feel safer trying to walk from one end, especially to walk from the Chem building to I.V. in the dark. It’s not so fun,” Allen said.

According to Calderon, UCPD and IVFP work together without overstepping boundaries.

“It is two different jurisdictions, but in other words, we work very closely. We don’t step on each other’s toes,” Calderon said.