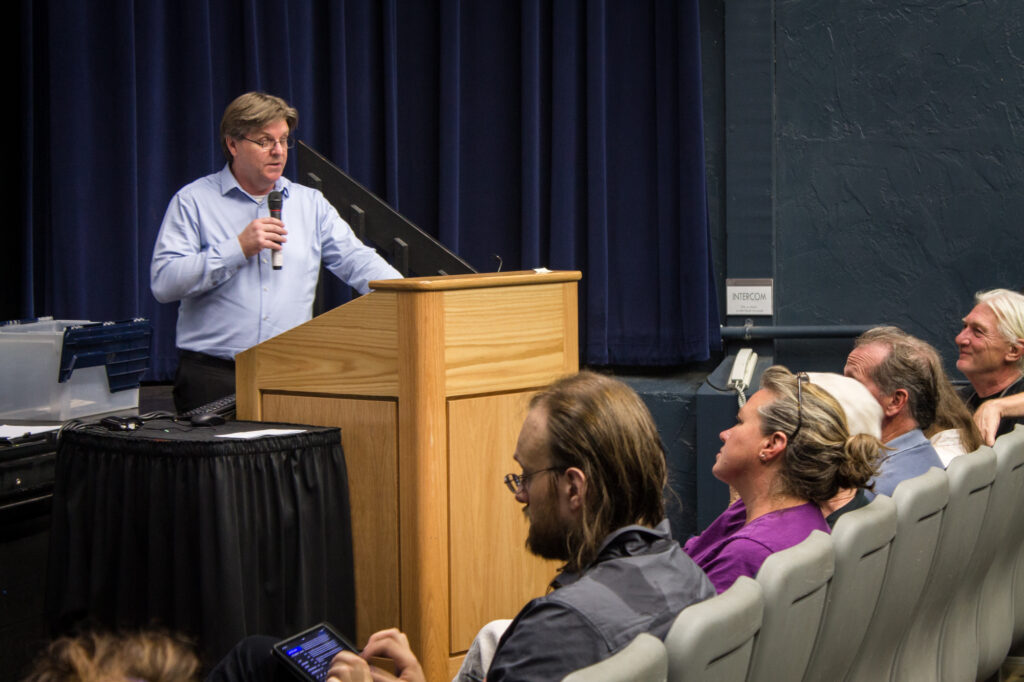 The Santa Barbara County Planning Commission held a meeting at Embarcadero Hall on Monday to discuss solutions to Isla Vista’s complicated on-street parking problem and to hear the viewpoints of local residents.

Santa Barbara Planning and Development staff member David Lackey reported the results of the 2013 parking survey in a 15 minute presentation which led to the decision to withhold a parking permit system in I.V. The parking survey was conducted over two days in May 2013 and counted the number of parked vehicles every two hours between 7 a.m. and 7 p.m. Opinions raised at this meeting will be summarized and presented to the Planning Commission at the hearing taking place on Nov. 4 at 9 a.m.

“The results from the study showed that there were approximately 3,500 on-street parking spaces in I.V.,” Lackey said.

Lackey also said the average number of available parking spaces in I.V. exceeds 15 percent, which prohibits the implementation of a parking permit system.

“The study concludes that the overall occupancy rate within the Isla Vista area is below the occupancy 85 percent trigger threshold point that would make us consider a permit program,” Lackey said. “Based on the analysis of the survey data, there appears to be adequate parking available for coastal access users. The overall occupancy rate exceeds the 15 percent required across the state area.”

According to long-term resident and UCSB alumna Sue Whisenand, the survey is outdated and irrelevant to solving current parking complications. Whisenand also said the survey should be taken during the school year when parking is most problematic.

“The survey is so out of date that it’s important that a new survey is done,” Whisenand said. “New survey dates are needed — UCSB and SBCC have different term times.”

Long-term resident Bob Sumner said he is skeptical of the survey results and believes it was “rigged.”

“No one can understand where the 15 percent comes from,” Sumner said. “I maintain that the capacities of many or most of the streets are inaccurate and they are over-estimated, and how that would happen I have no idea. All the streets on which I counted [parking spaces] were overestimated considerably to present a 15 percent parking figure.”

According to Lackey, steps have already been taken to increase spots and improve parking conditions without the use of permits.

“We’ve made additional efforts within the community to increase the on-street parking supply and these efforts have been relatively successful,” Lackey said. “County-owned surface parking plots have added 60 off-street parking spaces, including 45 spaces at the [Pardall] Solar Carpark and 15 spaces that are provided for coastal access.”

I.V. landlord Michael Schaumburg said UCSB should make use of on-campus parking structures and take measures to help the overcrowding in I.V.

“The elephant in the room is UCSB,” Schaumburg said. “UCSB has lots of parking … people don’t use their cars everyday but they do need to get home at the weekends. They need to store their car some place and I don’t see why UCSB can’t make arrangements with the residents to do something about that.”

UCSB Campus Democrats president Krishna Hammond said safety is an issue when residents have to walk long distances from their parking spots to their ultimate destinations.

“We act as if we care about our community but we let people walk six blocks from their car to their house at night,” Hammond said.