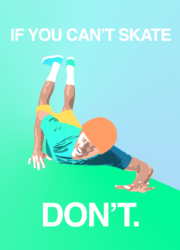 You wake up at 8:55 a.m. That discussion section you wish you never signed up for is at 9:00 a.m. On-time attendance is mandatory and your TA is one punctual dickhead, so you really can’t be late this time. Three minutes later, you’re booking it through Pardall Tunnel on that janky-ass skateboard your roommate scored from a swap meet. You subconsciously read the “No Skateboarding” sign, relieved to find no policemen on the other side. You’re going fast … real fast! There’s only one problem — you really suck at skateboarding. Why? Because when all the other normal kids in your neighborhood were playing outside, your lazy 12-year-old self was inside watching TV. But now that you’re a “cool” college kid from I.V. bro-town, you decided that skating to class with your headphones on (blasting death-metal) was a good idea.

Whatever, you made it this far and you’re running late. You only just passed HSSB and you need to be on the third floor of flippin’ Phelps Hall in two minutes. You awkwardly stomp your peddle-foot harder, giving your four-wheeled chariot a fat speed boost. Weaving through a horde of perma-drunk pledge bros, you’re flinging your arms around and rotating your hips like a hula hooper on acid because you never taught yourself how to properly pivot the tail of a skateboard. The intersecting bike path rapidly approaches, but you can’t tell if that cute biker girl with the headphones is going to speed up or slow down. There’s no time for a full stop; it’s time to hit the gas and impress her with your speedy style points! Mobbing fast over the yellow Braille-bumps with legs straighter than a pencil — you promptly eat shit and take down an innocent biker.

Unfortunately, incidents like this happen all the time on the UCSB campus. Perhaps this is because so many more people are trading their bikes for skateboards for class-to-class transportation in an effort to bypass the growing student population. As a fourth year at UCSB, I’ve seen more and more students each year mob through campus on skateboards instead of bikes … and for good reason. Skateboarding on campus nowadays is inherently a faster mode of travel than bikes. This is for several reasons: the bike paths are way too crowded, skateboards can be used pretty much anywhere while bikes cannot, skateboards don’t require U-locks or cruiser-blocked bike racks and (most importantly) skateboarders enjoy far less regulation than bikers do. According to an I.V. Foot Patrol officer I recently met, skateboarders technically maintain the status of “pedestrians, while bikers have to act similar to auto vehicles” (like stopping at stop signs). This is why I ditched my bike a long time ago — sike, it got stolen — and adopted a skateboard as my means of transportation.

However, as any great fiscal conservative might say, with great lack of regulation comes great responsibility. If people can’t follow the rules of the road or even maintain basic control of whatever they ride to class, we are going to see more policemen on campus issuing tickets to students. We are also going to see more regulation placed on skateboarding to class, which would really suck. It’s already started to happen. Policemen last spring quarter really began taking a more active role in issuing tickets to skateboarders in the Arbor (you can’t skate there between 10 a.m. and 3 p.m.), which has made it significantly more difficult to avoid pledging CalPIRG. They also completely outlawed skateboarding by the pavement surrounding the art building by the UCen. I have no issue with policemen enforcing on-campus traffic rules to keep students safe, but at the same time I really like getting to class as quickly as possible and don’t want to pay a $200 ticket because some kook who couldn’t skate decided to get in a skateboarding accident in the same location. I have no doubt that regulation placed on skateboarders will only increase and more tickets will be issued if people keep getting in needless and avoidable accidents.

There’s a pretty easy solution to this problem: if you can’t skate, don’t. It’s actually that simple. We all had to learn somewhere, so why not take the time to learn how to ride one outside your house in I.V. before you decide to take it to campus? I think I speak for most students when I get a little sketched out by watching an unconfident skateboarder on campus as they stand straight-legged on their UCen-edition Penny board deathtrap, eyes staring down at the grip tape as if the deck of the board will disintegrate any second.

We are lucky to have one of the most spread-out campuses of any UC school, but there is still a major need for both bike and skateboard etiquette. Let’s all make a concerted effort to follow the rules of the road and make the safety of our fellow Gauchos a larger priority.

This was an awesome read. Informative and entertaining, pretty much sums up the past 3 years skating now that I’m a 4th year.

I used to skate through the art building 4 days a week, only got yelled at once all year. But yeah I’m all for people learning to skate just not at my own risk..

Same stuff is happeneing in the pacific if you cant do it dont try valley kooks. surfing sucks dont ever try it. just cause you can go down the parking garage after smoking your bunk ass weed doesnt mean you can paddle out at one of the points and think u can get waves. Stay home and play beer die with wetsuits in the rain with your other poser ass friends. keep gobbling up all the quicksilver and billabong tshirts too it keeps guys who can actually surf sponsored and able to get out of the crowded shit water surf… Read more »

UCSB is a very compact campus compared to UCSC. But I don’t recommend skateboarding on the hills at UCSC—speeds get too high for any but the most competent, and skateboarding is prohibited on the UCSC campus.