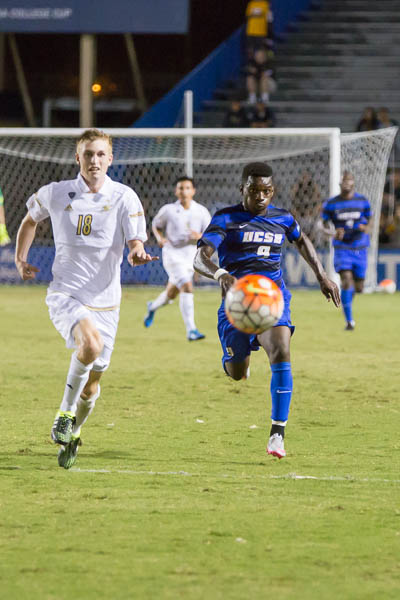 The UCSB men’s soccer team got off to a dream start to its Big West campaign this past weekend, going a perfect 2-0 thanks to three more goals from its nearly unstoppable forward Nick DePuy. After the Gauchos defeated UC Irvine 3-1 on Thursday to open up conference play, the scorching hot junior put away both goals in a 2-1 overtime win against CSUN on Saturday.

While conference road games were a huge issue for the Gauchos in 2014, the boys in blue seem to have found answers with more experience. Dating back to last year, UCSB has now won four straight on the road in the Big West and is undefeated in its last seven conference matches overall, not including the postseason. This is a huge turnaround from the start of conference play last season, when Santa Barbara went winless in its first four games away from home.

While the Gauchos did much of their damage against Irvine early in the first half, the game against Northridge took nearly 100 minutes of play before DePuy was able to put it away with a walk-off winner. Moments before the goal, DePuy flicked a ball into the box to find junior midfielder Seo-In Kim who was able to cut inside and get a shot off on target.

As he was for most of the game, Matador senior goalkeeper Adam Hobbs was in position to make the save, sending the ball towards UCSB’s Ahinga Selemani. The sophomore forward’s rebound attempt hit the right post, falling right back to DePuy in the six-yard box where he struck in his fifth game-winning goal of the season.

It’s been quite a year already for DePuy, who has now scored in three consecutive games. The former midfielder leads the Big West with 10 scores through 11 games, three more than anyone else in the conference. His five game-winners are good for a top-5 ranking in the nation.

Although UCSB dominated in the shot department, outshooting CSUN 18-5, Hobbs’ season-best 10 saves kept the Matadors in the game until late. The only other shot that got past the senior was the game’s opening goal, which DePuy headed past him in the 38th minute thanks to a good cross from junior midfielder Andy Perez. DePuy had seven shots to his name for the day, including six on frame.

The Gauchos seemed to be heading into the half up 1-0, but Northridge’s sophomore forward Dean Wright found an equalizer with just 1:59 left before the break. Redshirt freshman midfielder Bradley Mulvey and sophomore forward Jeremy Degraffenreidt picked up their first career assists after a through ball from Mulvey set up Wright for the game-tying shot.

However, it wasn’t enough for the Matadors, who for the second straight time hosting the Gauchos lost 2-1 due to an overtime game-winner.

In Thursday’s win over the Anteaters, despite conceding less than three minutes into the game, the Gauchos answered back quickly to take control on their way to the 3-1 win.

After finding space down the left wing, freshman forward Geoffrey Acheampong sent in a cross that ended up in the back of the net to tie the game at one goal apiece. Less than two minutes passed before DePuy put away a shot passed Irvine’s redshirt senior goalkeeper Michael Breslin to make it 2-1, thanks to a perfect through ball from sophomore left back Randy Mendoza.

Vom Steeg made four saves on the night, but perhaps none was better than the one he made in the 20th minute on a shot by senior midfielder Mats Bjurman, coming off his line to make a fine stop and conserve the Gauchos’ slim advantage.

The Gauchos held on to their one-goal lead all the way until the 86th minute, when junior midfielder Josue Espana came up with a takeaway deep in Irvine territory before beating Breslin inside the penalty area. With the 3-1 victory, UCSB has now come away with a win in its last four Big West openers.

Through one weekend of conference play, Northridge and Irvine join Sacramento St. as the only winless teams in the Big West.

UCSB returns home this week for games against UC Riverside on Thursday and Cal State Fullerton on Saturday.

The 10 goals for Depuy are the third most of any player in the country and the 5 game winners have him in a tie for first. The strength of schedule UCSB has played against makes his goal scoring exploits all the more extraordinary. UCSB is now an undefeated 13-0-3 all time when Depuy scores. Also it’s the third straight UCSB OT win @CSUN. This year with Depuy, in 2013 Campion converted a PK in OT, and in 2011 CSUN scored in the 89th minute to force OT, and then scored again… but on their own net with 19 seconds… Read more »