The Daily Nexus
News
Larry Calvaletto Returns to his Popular Question Booth
October 1, 2015 at 6:00 am by Vicky Munro

The new school year marks the return of Larry Calvaletto, who offers conversation and advice to students willing to approach him at his booth outside Davidson Library 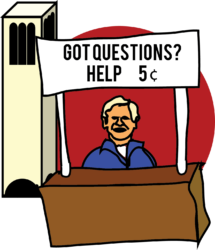 In his Peanuts-inspired booth, Larry Calvaletto is back outside Davidson Library for the 2015-2016 school year to facilitate conversations with anyone interested.

Calvaletto began regularly talking with students, faculty and campus visitors last fall, standing at the booth from either 9 a.m. or noon until 3 p.m. He aims to connect with the younger generation through conversation and is willing to chat with anyone about any topic or question.

Calvaletto said although the advice and conversations are free, he accepts donations to support mission trips.

“It’s not about the money so I always have a sign that it’s free,” Calvaletto said. “My children were missionaries in Africa, they’ve now returned to the States, but I plan to use it to help some other types of missions somewhere else.”

Calvaletto said his main goal is to “make a difference” and encourage the younger generation to make smart decisions.

“I see culture changing faster than I ever imagined,” Calvaletto said. “So my goal is to one by one encourage students to do what they feel is right.”

According to Calvaletto, the most important advice he has to offer was given to him by an upperclassman when he attended California Maritime Academy.

“After a week I wanted to quit,” Calvaletto said. “And an upperclassmen came alongside me and said, ‘You can quit if you want, but you’re not getting back any of your money.’ What I suggest is just stay for this semester and if at the end of this semester if you decide to quit you can quit then.”

According to Calvaletto, his questions and conversations usually revolve around relationships.

“What does that tell you about mankind? We were designed for relationships,” Calvaletto said. “People are hurting because of broken relationships — I can only tell them it takes time to heal some of these things.”

Calvaletto said although he identifies as a conservative Catholic, he is not here to argue his beliefs, despite rumours on social media sites like Reddit.

Armistead said she was fine with him conversing with students so long as he does not provide academic counseling.

“My biggest concern wasn’t in terms of what his opinion was; it was that he wasn’t trying to provide anything that was university business,” Armistead said.
Third-year economics major Christopher Wong said Calvaletto has a lot to offer students on campus.

“He’s cool, just doing his thing, posting at the corner with his 5 cents sign, probably the most productive 5 cents you can give somebody,” Wong said.

A version of this story appeared on p. 5 of the Thursday, Oct. 1 print edition of the Daily Nexus.