The Daily Nexus
Opinion
The Personal Responsibility of Environmentalism
September 29, 2015 at 5:00 am by David Rubinstein 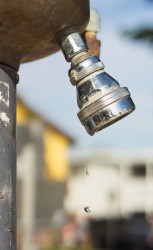 My friend’s sister recently informed me of her bold and ambitious plans for the future. She’s entering her sophomore year of high school now, and along with figuring out what dating and homework past dinnertime (gasp) are, she’s already starting to look toward her future: her college, her major, her career. She plays volleyball and just knows she will play at Pepperdine while majoring in business to eventually run her own company. When I was her age I just knew I was going to play baseball at Rice while majoring in Economy to eventually run my own business. Shockingly, sophomore David went zero for four on that one (coincidentally, that’s what killed the baseball dream too): I realized Houston is fun for mosquitoes and cockroaches exclusively, I haven’t played baseball in a few years, I am majoring in physics and as a socialist, I can’t quite see myself dedicating my life to the pursuit of the accumulation of capital. As I listened to my young friend confidently explain to me the rest of her life, my mind drifted to senior year when I decided to attend UCSB.

Everyone I talked to, from my old, conservative second cousin (or first cousin once removed, who the hell knows the difference?) to my environmental science teacher who also attended SB, had a take on my attending this campus.

Like it or not, UCSB lives amongst the dense blurred and disputed territories of infamy and splendor. Ignoring the self-righteous arrogance of those who spouted nonsense of UCSB being exclusively a party school, the most common response to “I’m going to UCSB” had something to do with our liberalism: More specifically, our relation with the environment.

Let me back up a little. I was born in Houston (explains why I would ever even consider attending college in that hellhole) but moved to a beach town called Carlsbad in North County, San Diego when I was five. “Nature,” however abstractly you want to define that, is at the center of life in San Diego; both geographically: (the beach is five minutes away, the mountains and desert are both an hour away) and internally (localism and communal living is embedded among San Diego culture).

Therefore, it should come as no surprise that “environmentalism” and sustainable living were embedded in the fabric of life growing up there: schools organized beach cleanups, we grew up worshipping the Three R’s and personal responsibility in maintaining our local oasis was emphasized. For example, as you drive into Encinitas, the town just south of Carlsbad, a huge billboard of a grizzly bear lines the Pacific Coast Highway saying, “I’m looking at you, Water Waster.” It’s a cute and clever reminder to residents that, although we may live by a gigantic body of water, the bear’s source of water is rapidly and exponentially diminishing, and that we can take individual action to halt and reverse the climate change leading to the water loss and ultimately save the cute bear. Is this right? In a sense.

But not in the way it is constantly being presented. Not by emphasizing reduce, reuse, recycle, not by doing a beach cleanup every two months and not by cutting back your showering by five minutes.

I liken these approaches and this narrative to respectability politics, the notion that marginalized groups need to police and assimilate themselves into the broader society, rather than have society change its discriminatory ways. Yet the narrative of respectability politics fails on multiple fronts. When you tell a marginalized people to simply assimilate, be it by lecturing black men about leaving their families, or by telling POC to simply “not break the law” in response to protests of police brutality, you ignore the systemic infrastructure of society which leads to such circumstances. Lecturing black men for not staying with their family while ignoring housing discrimination/gentrification, lack of spending for public education in their communities, lack of living-wage-paying jobs, and subsequently, lack of healthcare (because for some reason healthcare is tied to occupational status). That, alone with the influx of both drugs and militarized police due to the war on drugs appears ignorant and disingenuous at best, and cynically apathetic at worst.

The modern environmental movement exists on a parallel narrative to this form of respectability politics. We are told it is our responsibility to adapt to the changing climate. The greater society doesn’t have to change; we have to change our ways to allow it to exist as it is. We have to cut back on our showers, we have to recycle the plastic soda cans we buy, we have to buy a Prius, we have to avoid littering, we have to not wash our Prius excessively, etc.

In the same sense that telling marginalized people simply to assimilate ignores the barriers preventing them from doing so, placing environmental justice on the individual scale ignores the greater societal barriers that prevent us from achieving a sustainable society.

For example, recently Jerry Brown passed the first sweeping water restriction legislation, mandating that California, mostly through local cities, cut back its water usage 25%. However, large farms receive their water from sources outside local agencies, and as such are not a part of the 25% cutback. This makes the executive order unsatisfying to say the least, especially since agriculture accounts for more than half of the state’s water usage. Farmers are hit extremely hard during droughts, so I have no intention of making scapegoats out of them, however, farming on the whole is rapidly turning into less of the romantic, small-scale sustainable process, and more of the typical, big business large farms. This big business in turn decides to plant “cash crops,” things like almonds and walnuts which require 1.1 and 4.9 gallons of water per nut, respectively. One proposed solution is to regulate the crops big agriculture produces and to convert the land currently used for growing luxury crops into land for sustainable, necessary crops. However, Brown and others challenge that, saying government regulation of crop production will hurt the market and have economic consequences. And with this, we enter into the second societal barrier to sustainability: capitalism.

Capitalism is inherently incapable of being paired with environmentalism. The critique of crop regulation demonstrates exactly why: capitalism as it is cannot function without the profit motive. The cornerstones of capitalism are exploitation and accumulation: be it money, labor, resources or capital in general. As such, the continued need for exploitation and accumulation creates scarcity, which in turn can be channeled into another market to be exploited, creating even greater scarcity. It is exactly because of this need for scarcity that the current climate crisis is upon us. For example, even as we witness all our natural resources dwindling they are simultaneously being lumped into the market, under the pretense that “the market will work itself out,” ignoring the fact that the market is exactly what got us here in the first place. It is only under this assumption, that the market and profit are inherently most important to our society, that the critique of regulating crops makes sense. In this state of mind, “profit” and economic growth are what the government, and as such, we must prioritize with the environment and the abstract “nature” delegated to a secondary concern that will be dealt with by our increased productivity and profit.

The only way to ensure the longevity of our natural resources is to provide them with something more than just an exchange value in the market, a sort of intrinsic use value. However, this designation of nature as having an intrinsic value is incompatible with our current definition of capitalism, as it violates both its cornerstones. Therefore, the only way to overcome the biggest barrier to a sustainable society is to come up with an alternative to capitalism. I don’t care what you call it; be it some new “post-capitalism”, socialism or marxism, the only way to ensure our continued coexistence on this planet and with this planet is to create an economic system that places greater nuance to “value” than simply exchange value. And the only way to achieve that is to first recognize it as a problem, and second, act in unity as a class and as a larger society on the whole to demand a new sustainable society.

Which brings us back to our reputation at UCSB as being a liberal, environmentally-minded University. Our reputation, and our achievements in sustainability as a campus are representative of what we can accomplish as a united front. We are seen as “UCSB,” an abstract conglomerate of individuals acting under a common banner, much more powerful than our individual selves. We should apply this lesson to our greater society on the whole, and recognize that, although yes, we should drive Priuses, the only way the bear depicted in Encinitas will have enough water to drink is when we unite as a society and utilize our power to its maximum extent to demand a sustainable society for all.

Lot of smarts in that potisng!