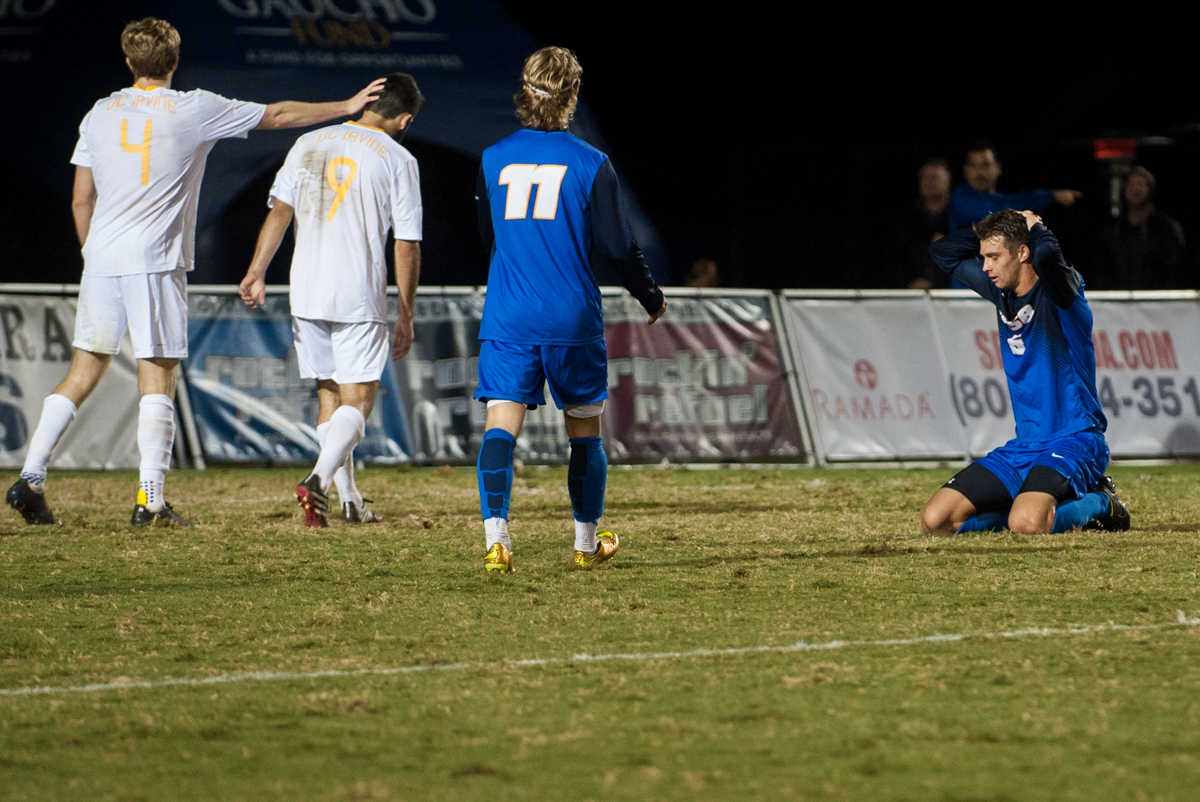 The UCSB men’s soccer team closed out its 2015 non-conference schedule with a dominant 4-0 win over San Diego just two days after a sloppy 2-0 loss to No. 9 Akron.

Splitting their two home games over the weekend has the Gauchos at 5-3-1 as they prepare for their first Big West game of the season against UC Irvine. Akron returned home at 5-2-1 overall with an impressive mark of 4-1 on the road. The Toreros dropped their second consecutive game to fall to a mark of 4-4-2.

Akron didn’t particularly take the game from UCSB on Friday, rather they were given it thanks to a pair of crucial mistakes in the defensive third.

“It was certainly a disappointing night for us. We had high expectations of playing well and we didn’t play well,” Head Coach Tim Vom Steeg said. “The key to Akron was to get wide play, to get service, to get players in the box, and about 25 minutes in we weren’t able to get that.”

After surviving early offensive pressure from the Gauchos, particularly coming from sophomore forward Ahinga Selemani who had a team-high three shots on the night, the Zips found themselves in a great position picking off a poorly placed back pass in the 35th minute.

Freshman goalkeeper Justin Vom Steeg reacted quickly to make a sliding save on Sam Gainford’s first attempt on goal, but the sophomore forward was first to the rebound and he scored easily. UCSB went into the half trailing 1-0, the first time it faced a deficit going into halftime all season.

“Our back line was out of sorts, but the reality is we gave them that first goal and that allowed Akron to sit in with seven guys,” Vom Steeg said. “Coaching-wise, it was absolutely frustrating because I didn’t think that we had a lot of options available to us.”

Things didn’t get much better for the Gauchos from there. Akron was able to pack up on the defensive side for the rest of the game, stifling any half-chances UCSB could conjure up in the second half.

“We looked a little tired. We had to chase the game after we went down and Akron was very good at staying in and keeping everybody in front of them,” Vom Steeg said. “Anytime you have to take the game to the other team, you need something to get a goal – something to change the momentum – and we just never got a goal.”

Still searching for an equalizer in the 87th minute, an unfortunate attempt by the Gauchos to clear the ball from deep in their territory was deflected right to forward Stuart Holthusen. Vom Steeg rushed to meet the sophomore on the right side of the box, but the Akron man was able to place a shot past the keeper’s left and inside the near post to put the game away at 2-0.

After being shutout for just the first time this season, the Gauchos bounced back strong on Sunday, looking more like the team that won 4-2 at UCLA just one week ago. UCSB was firing on all cylinders, scoring as many goals as San Diego had shot attempts with four.

Freshman defender Sam Strong picked up his second goal of the season just over eight minutes in, capitalizing on a rebound after a header from Selemani was saved wide by USD sophomore goalkeeper Thomas Olsen.

The action picked up again in the second half, as UCSB put the game away with a pair of goals separated by just over a minute. Selemani was set up by a great run from freshman forward Geoffrey Acheampong, who led a counterattack all the way down the left wing.

Acheampong cut it back to find Selemani at the top of the box, where he found space away from his defender and blast a left-footed shot in off the keeper’s gloves at the near post. The first-year Gaucho has proven to be a solid number two attacking option alongside Nick DePuy, notching his third goal of the year.

Speaking of DePuy, after what has become a rare occasion with the junior failing to find the back of the net on Friday, the 6-4 forward put the game away with a goal in the 60th minute. A Torero turnover gave junior midfielder Josue Espana the opportunity to send in a cross from deep down the left wing. Just as he has been so many times, DePuy was the first to the ball, knocking a shot past Olsen at the far post to make it 3-0.

DePuy now has seven goals on the season, two more than anyone else in the Big West. As a team, the Gauchos have been outstanding on offense, scoring an average of two goals per game. Acheampong also leads the conference with four assists, while Espana and junior left back Ismaila Jome, are tied for second with three each.

Making his debut for the Gauchos, freshman forward Jonah Adomakoh came off the bench to add another score, beating Olsen with a well-placed shot on a breakaway down the right side.

Vom Steeg had a relatively simple night with two saves, a much more relaxed outing compared to Friday when he finished with a career-best seven saves and the Gauchos fell for the first time at home this season.

Injuries have begun to take a toll on UCSB, with several key starters missing action in recent games. Ankle injuries have kept Jome and junior midfielder Drew Murphy out since UCSB’s game against College of Charleston on September 18, while sophomore center back Jeff Quezada missed this past weekend’s action after being injured in practice. Sophomore defender Fuad Adeniyi has gotten the start at center back during Quezada’s two-game absence.

Santa Barbara will head back on the road this weekend to open up conference play against UC Irvine on Thursday and Cal State Northridge on Saturday.