The Daily Nexus
Music
Glass Animals Was Better Than Your Senior Prom
September 24, 2015 at 10:10 am by Madeline Lockhart 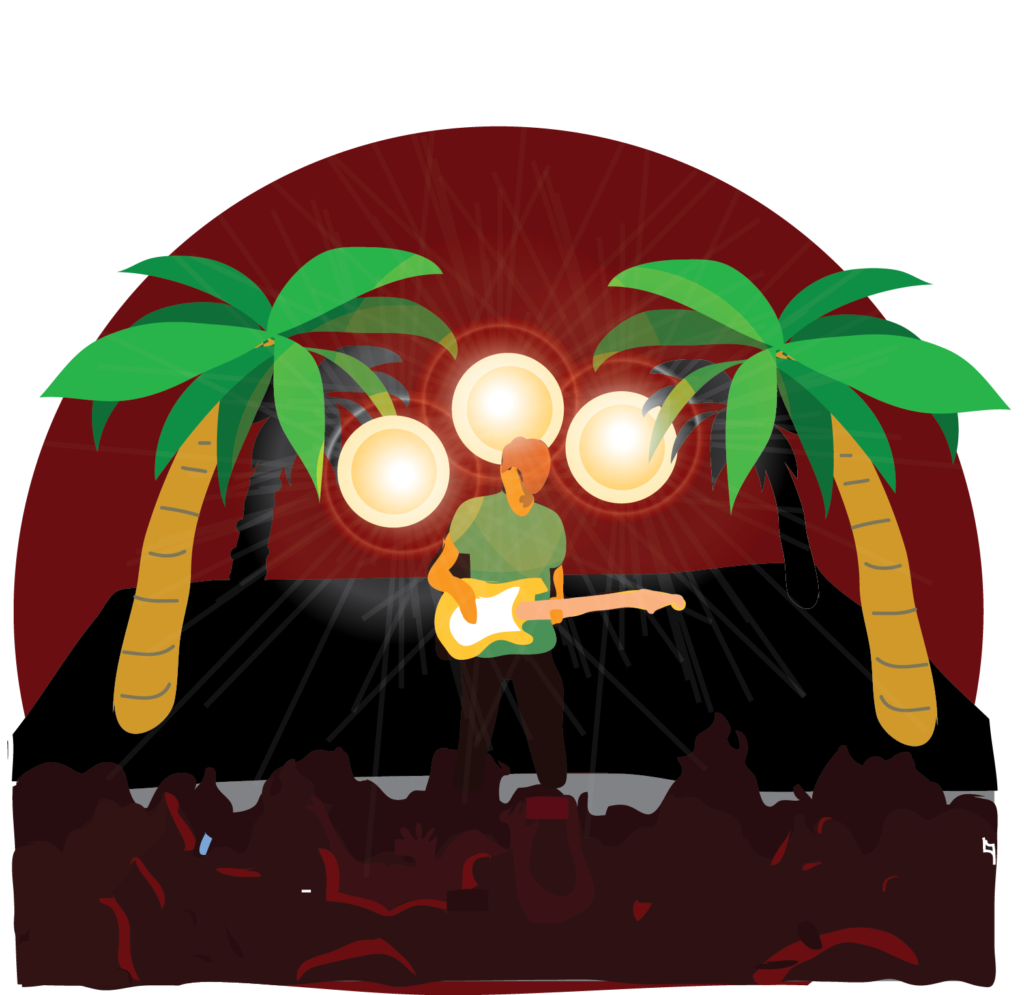 Lyft drops me off at Earl Warren Showgrounds. The line is moving slower than the Six Flags’ Batman ride and twice as long. I resist the urge to cut and take my place at the back.

It’s 8:15. We’re still waiting to get in. I realize why the line isn’t moving. The security guards could pursue TSA careers for how thoroughly they’re checking people. Even a pack of gum is contraband.

The line I choose has an especially dedicated guard. I make a T with my arms as he carefully frisks my entire body. A staple wouldn’t get past this guy.

Inside, the stage resembles a tropical paradise. Palm trees tower over the stage and the drum kit and keyboard are lit up like fireflies. A lonesome pineapple hides beneath an enormous speaker. The stage and lighting production is impressive, but where are Glass Animals?

It’s 10:30. No Glass Animals. I begin to regret purchasing my ticket. My legs cramp from standing, so I join the group of anxiously seated Glass Animals fans.

The scene resembles a blazing hot picnic, minus the food. Angry posts from people who are still waiting in line litter the Earl Warren Facebook page.

“still waiting in a 2 hour line”

“THIS IS THE WORST.”

Suddenly, the lights go off. The crowd screams in anticipation and Glass Animals come out. They apologize for the wait and launch into the first song of the set, “Walla Walla”. David Bayley shuffles from foot to foot as he croons into the microphone, “Honey, honey, don’t you cry, take my hand.”

The tropical heat is getting to everyone. The crowd is an undulating, frenzied mess of sweat and crazy dance moves. One woman who looks like she just won Survivor maniacally leaps over the small fence separating the crowd from the stage, and a security guard shoves her and she scampers off with a quick bow. At least she tried.

The chosen one — a very drunk fangirl — gets close enough to the lead singer such that he has his arm around her. I watch her drunkenly struggle to Snapchat her special moment with the lead singer. She figures it out and then jumps the fence, hops up on stage, and disappears. We think we see her lying passed out in the back but it’s too steamy to tell.

The keyboardist is feeling it. The drummer and even the shy guitarist in the back are vibing to the synth-y safari beats. Towards the end, they do an electronic and slightly psychedelic cover of “Love Lockdown” by Kanye West and a beautifully different cover of the Yeah Yeah Yeah’s “Gold Lion” which nearly makes me cry (it was my 7th grade jam and I knew all the words).

Their last song is “Pools,” and I shake my little soul until I’m sweatier than a P90X instructor. The song ends and we call our Uber friend David. While I blare “Titanic” from David’s blue Prius, concert-goers desperately scramble to find open cabs and rally friends. David tells us he loves us but he has to roll down the window because we smell. Worth it.