The Daily Nexus
Sports
Gauchos Bounce Back After Loss to Dayton
September 24, 2015 at 5:00 am by Elliot Thornton 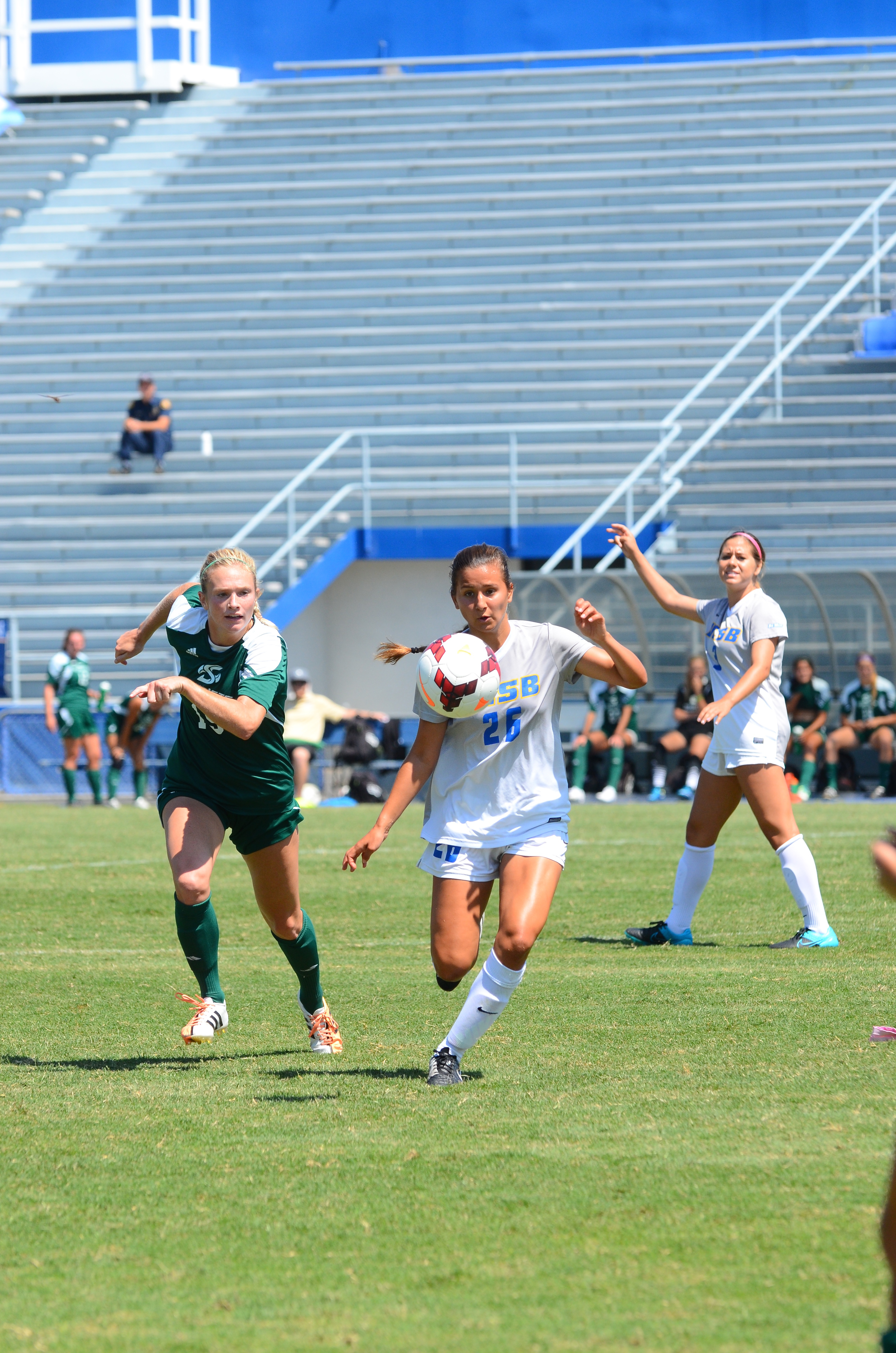 Against Sacramento State, Jessica Clegg runs the ball toward the goal.

UCSB’s streaks of six straight unbeaten games and five consecutive wins were put to rest this past Sunday. The Gaucho women’s soccer team suffered a heart-aching loss at home to University of Dayton as two early goals in the match’s first and second halves gave the Flyers an advantage, eventually leading to their 2-1 victory.

The loss temporarily brought the Gauchos to a record of 5-3-1, while Dayton improved to 2-7.

The Flyers managed to strike first in the game’s fifth minute as redshirt sophomore midfielder Libby Leedom received a cross toward the middle of the box and placed the ball in the bottom left of the goal.

Following the start of the second half, senior forward Ashley Campbell helped Dayton capitalize on a Gaucho miscue by scoring on a screamer in the ninth minute, booting the ball from way beyond the 18-yard box into the back right of the net. From that point on it was an uphill battle for UCSB, a situation they were not too familiar with prior to their overtime victory against other Atlantic-10 opponent Duquesne.

Despite trailing by two points, the Gauchos answered back in the 58th minute. Junior center midfielder Sara Feder attacked the middle and connected on a crossing assist from freshman forward Mallory Hromatko for a header score. But as time expired, the UCSB score occurred too late and Dayton pulled off the 2-1 upset. In spite of taking a total of 13 shot attempts, Santa Barbara’s quick striking tactics may have been too overbearing in its game plan.

“I think consistency is a big focal point of our team goals,” Coach Paul Stumpf said. “I would love a consistent moniker of playing hard, effective and efficient soccer to rub off on us.”

Fortunately for the Gauchos, last night’s match against CSU Bakersfield provided them with an opportunity to quickly overcome the disappointing loss. As far as the team’s demeanor and overall attitude with the conference season nearing, Coach Stumpf believes there is still a lot to be learned from the final action before Big West play begins.

The last time UCSB faced off against Bakersfield was Sept. 14th during which the Gauchos cruised to a 2-0 victory at Harder Stadium. Angelisa Cortez scored an unassisted goal in the 18th minute that put her team in position to win the game.

Last night, Santa Barbara earned its third shutout victory of the season in its 3-0 win over the Roadrunners. Bakersfield entered Wednesday’s match with a record of 2-5-1, hoping for similar results in which UCSB would be the victim of another upset but were unlucky.

It was somewhat of a slow start for the Gauchos’, but a score by Hromatko jumpstarted UCSB’s fast-paced scoring run. Santa Barbara’s advantage in corner kicks definitely turned the match in its favor as UCSB recorded eight to Bakersfield’s zero.

The Gauchos’ benefited from their landslide of corner kicks with scores by freshman midfielder Jessica Clegg in the 51st minute and Feder in the 61st minute.

With Santa Barbara back to its winning ways, the Gauchos’ are now 6-3-1, while the Roadrunners hold a record of 2-6-1. UCSB will return to host the 1-5-1 Pacific Tigers this Saturday at 1 p.m. at Harder Stadium. This will be the Gauchos’ final non-conference game of the season.

A version of this article appeared on page 9 of September 24, 2015’s print edition of the Daily Nexus.