The Daily Nexus
Sports
UCSB Handles College of Charleston at Home, Travels to UCLA Tonight
September 21, 2015 at 4:46 am by Michael Jorgenson 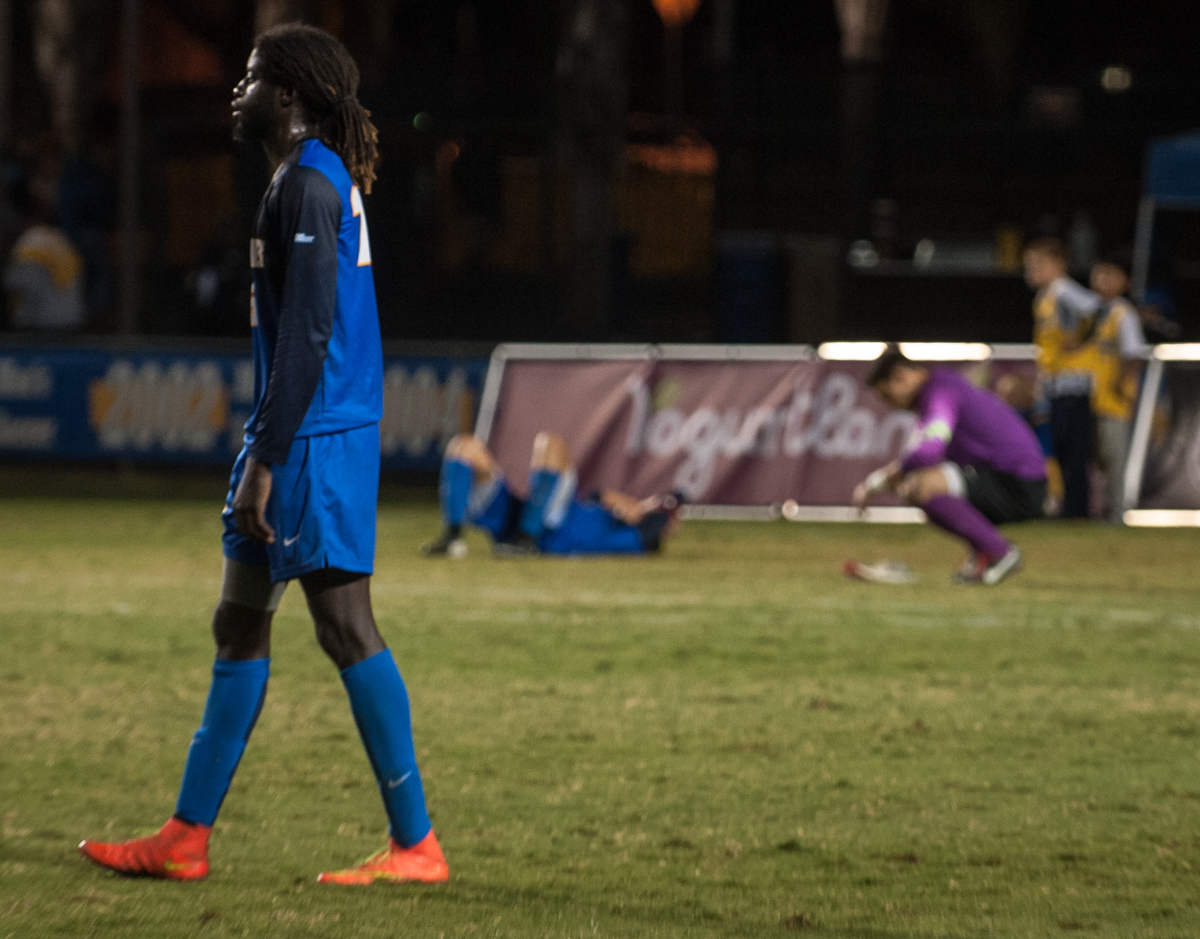 Junior left back Ismaila Jome went down with an ankle injury on Friday night and did not return to the game. / Daily Nexus File Photo

After coming back from a season-long road trip which saw the UCSB men’s soccer team win just one of four games, the familiar scenery of Harder Stadium on Friday night yielded familiar results. Set pieces played a big part early in the game and the Gauchos enjoyed yet another strong first half on their way to a 3-1 win over the College of Charleston.

Santa Barbara now heads back on the road after its quick one-game home stand to face UCLA tonight at 7:00 p.m.

“It was a good bounce back performance for us,” Vom Steeg said. “Charleston was very competitive. It’s a grind and in each game you just have to keep getting better.”

The win on Friday improves the Gauchos’ record to 3-2-1 overall, while Charleston falls to an identical mark of 3-2-1.

It didn’t take long to get the action started, as UCSB forward Ahinga Selemani was aggressive early. After the sophomore transfer earned a corner just under six minutes in, junior midfielder Josue Espana set up Sam Strong for his first career NCAA goal. Espana’s corner sailed over a wave of players at the near post before falling perfectly to the freshman defender inside the six-yard box for an easy header, putting UCSB up 1-0.

It took only 85 seconds for the Cougars to answer back. Junior midfielder Eric Clark’s free kick found sophomore defender Cesar Murillo to tie it at 1-1, marking the first time the Gauchos have conceded a first half goal this season.

“We have to eliminate making that one big mistake,” Vom Steeg said. “We’re playing with a young back line and I still feel like our communication, our spacing, we’re still prone to make a mistake going up for the same ball, so we just have to keep working on that.”

After junior left back Ismaila Jome left the game with an ankle injury about 15 minutes in, freshman midfielder Geoffrey Acheampong filled in and was a menace on the offensive side. The former Cate School star led the way with two assists, his first coming with just over 26 minutes left in the first half.

“We got some good performances from some different players. In particular, I thought [Geoffrey] played his best college game,” Vom Steeg said. “We were planning to bring Geoffrey into [Jome’s] position anyway, but there was no need to actually bring Ish back into that game the way that Geoffrey was playing.”

With his third corner attempt in under a minute, Acheampong played a ball into a packed six-yard box where junior forward Nick DePuy was able to establish position over his defender and place a header just inside the far post, giving his team a 2-1 lead heading into the half. Santa Barbara has now scored first in each of its six games and taken a lead into halftime in all but one.

DePuy’s goal was his fourth of the season, tied for first in the Big West, and the eighth game-winner of his career. In the 12 games that DePuy has scored, the Gauchos have gone an undefeated 9-0-3.

With just under 22 minutes to go in the game, Acheampong played in a low cross that found junior midfielder Andy Perez at the far post where he was able to power a deflected shot in off a defender to seal the 3-1 win.

“I just saw two guys trying to crash the box and my job was just to get it into the six,” Acheampong said. “It’s kind of a gray area there where the keeper doesn’t really know to stay or come out, so I just put it in between for Nick or Andy to crash it and it just landed at Andy’s foot.”

UCSB found itself threatening early and often, outshooting Charleston 21-4 on the night. Goalkeeper Kevin Shields was the easy choice for man of the match for the visiting side, as the junior made nine saves to keep the score line respectable.

“I did feel like our offense really started to come alive today,” Vom Steeg said. “We really wore that team down, so our energy and our running was good.”

Despite the win, it wasn’t all smiles for the Gauchos. Already missing junior midfielder Drew Murphy to an ankle injury, UCSB now might also be without its starting left back Jome as well against UCLA after he suffered an apparent sprained ankle.

The game was also delayed for an extended period of time in the first half when Charleston’s Eric Clark needed to be carted off after taking a hard fall while challenging for a header.

The Gauchos now shift their attention to tonight, where they will face a hostile Bruin crowd in a Pac-12 televised game. UCSB most recently fell to UCLA at Harder Stadium 1-0 last season and has not defeated its UC counterpart since 2011, going 0-3-1 since that last win.

The Bruins enter with a 2-3 record this season, most recently ousting Big West opponent Cal Poly 4-1 on Friday. UCLA’s youth has powered it so far this season with seven of its eight goals coming from its underclassmen. Freshman midfielder Jackson Yueill and sophomore forward Seyi Adekoyi lead the way with two goals each.

Tonight’s game is set to kickoff at 7:00 p.m. at Drake Stadium and will be televised on the Pac-12 Networks.