The Daily Nexus
Science & Tech
Earth Versus Asteroid: Who Will Win?
September 17, 2015 at 6:15 am by Stephanie Pernett 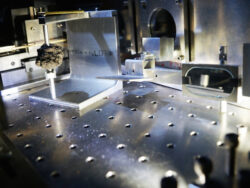 Small-scale model of the asteroid, represented by basalt, is held in line of sight of the laser.

Natural disasters and the diminishing of Earth’s resources are only some of the problems that humans have to face; there is also the threat of asteroids colliding into Earth and causing a razing of the environment, its resources and terrestrial life itself. To combat this possibility, UC Santa Barbara physicist Philip Lubin and professor at California Polytechnic State University, San Luis Obispo Gary B. Hughes, have organized an Experimental Cosmology Group with the objective of developing a strategy for deflecting an asteroid in collision course with Earth. The strategy? Focusing kilowatt-class lasers on suspect asteroids to alter their rotations and ultimately change their trajectories.

The groups studies have led to the emergence of the futuristic planetary defense program DE-STAR (Directed Energy System for Targeting of Asteroids and Asteroid), and its more practical-in-vision twin, DE-STARLITE programs. As with the Experimental Cosmology Group’s conception, these programs plan to use lasers powered by photovoltaics, converting solar energy into direct current electricity to heat the surfaces of asteroids to 3000 Kelvin (4900°F). The heat causes parts of the asteroid to vaporize, and this mass ejection creates a plume of evaporated material that acts as reactionary thrust able to effect the asteroid’s orbit.

While both programs share the same strategy, DE-STARLITE is much smaller. It is known as a “stand on” system.

“It goes up on a single launcher, a rocket if you will. It needs months to years of engagement in order to deflect a large asteroid,” says Lubin.

DE-STAR, on the other hand, is a “stand-off” system, meaning it deflects asteroids from machines here on Earth. Lubin states, “[The laser] does not travel to the target. It can initiate targets that are as far away as 1 AU, which is an astronomical unit. That is the average distance from the Earth to the sun.”

The particulars of the strategy evoke five classes of lasers, ranging from 0 to 4; 0 being the smallest, about 1 meter, and 4 being the largest, about 10000 meters. To bring it to perspective, Lubin explains: “If you want to have full planetary defense in a stand-off mode, you would need a class 3 or class 4 system. [Class 3] has roughly 1 gigawatt of power and a class 4 has roughly 100 gigawatts.”

As for how much time we have to deflect an asteroid, Professor Lubin emphasizes that there are many variables to consider.

“It depends on how far the asteroid is, how large it is, how fast it’s moving, how much power you have in the laser, and when you begin engagement. The further away you begin the process and the more power you have, the less time you’ll need,” says Lubin.

Simulations imitating the asteroid deflection event were done using low-powered lasers and basalt, a type of rock that has similar composition to an asteroid, The cosmology group pointed the laser at the basalt and through the process of laser ablation, which removes material from a solid, were able to change the rock’s mass and turn the eroded mass into reactionary thrust, causing the basalt to alter its trajectory, confirming the group’s hypothesis.

Aside from deflection, the lasers can also be used to guide asteroids. With these systems, it may be possible to bring them to Earth so they may be mined and studied. Before that can happen, however, the laser systems must do their primary job of helping Earth avoid asteroid collisions.