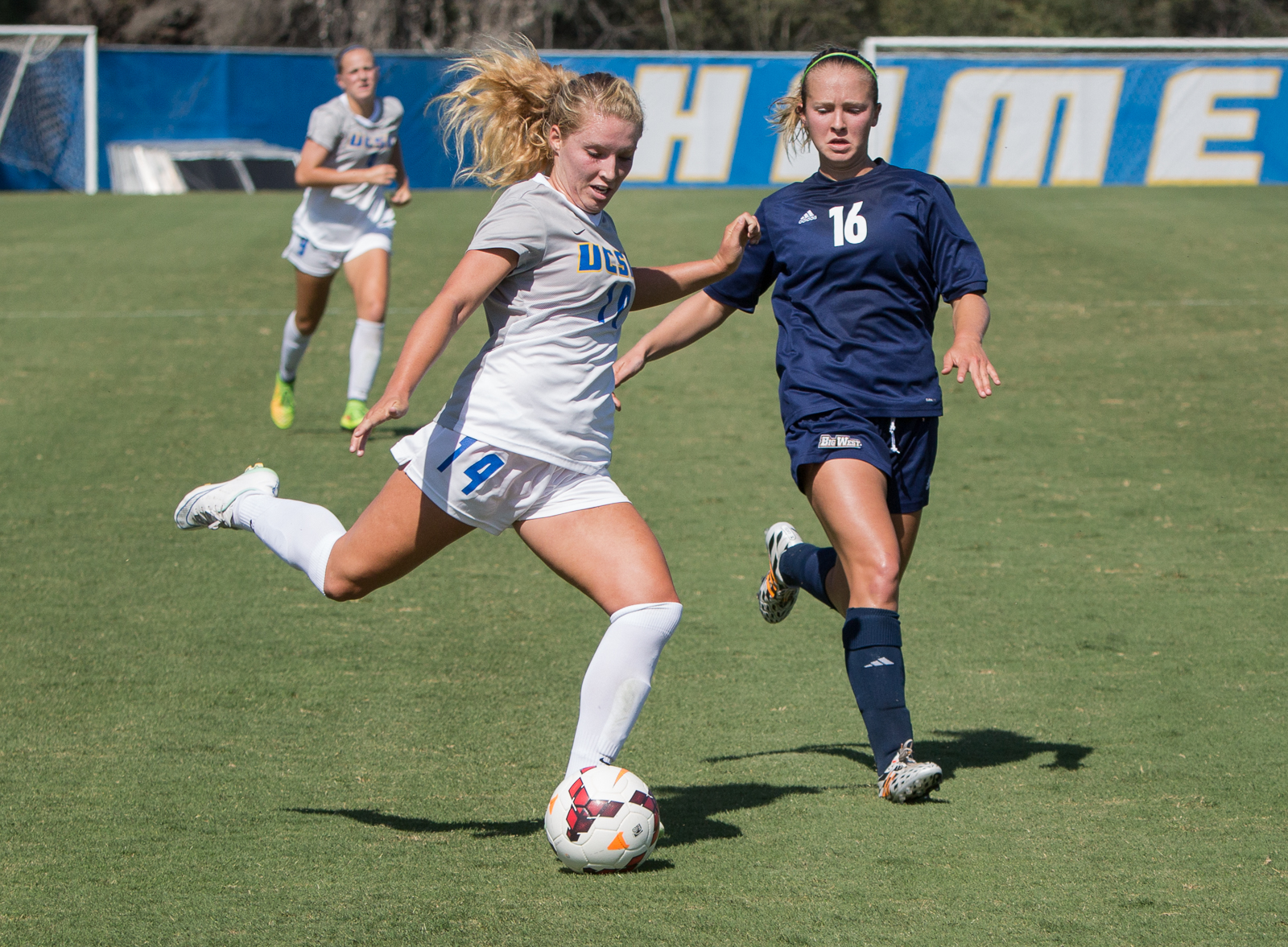 Another week, another tough task for Head Coach Paul Stumpf and the UCSB women’s soccer team.

After a double overtime battle last Friday against San Jose State which ended in a 1-1 tie, the Gauchos (0-2-1) look to pick things back up and clinch their first home win of the season as they take on Big-12 powerhouse Texas University.

A match jammed with plenty of scoring opportunities for UCSB, the Gauchos could not capitalize on their offensive drives against the Spartans, sending the game into extra time before finishing in a 1-1 draw.

But as last week’s match is put aside, UCSB’s attention now shifts over to Texas.

“This is a very good team we are going to see Friday night,” Stumpf said. “We expect Texas to be athletic and very direct in trying to push the ball forward.”

Texas is 1-1-1 on the year, coming off of a 0-0 stalemate with Ohio State last Sunday. Head Coach Angela Kelly and her Longhorns finished the 2014 season with an 11-8-4 record, good enough to clinch the fifth seed in conference play. The Longhorns are a confident team on the road claiming a record of 6-2 last season so expect them to play with poise and not be phased by the Gaucho Locos.

Notables for Texas include 5-10 sophomore Olivia Brook. As a freshman, Brooke led the team in scoring with 16 points, seven goals and 18 shots on goal. Brooke proved to be the offensive target for Texas, registering a game-winning goal against archrival No. 21 Texas Tech for an upset win in overtime.

Senior mid Lindsey Meyer will also be a player that UCSB must defend well against. Meyer finished second overall on the team in scoring with 12 points and five goals. Like Brooke, Meyer is not afraid of the big moment, seizing two game-winners during her junior campaign including one in the Big-12 Quarterfinal against Texas Tech.

Defending that Longhorn frontline and containing the play of duo Brook and Meyer will be a crucial factor in UCSB’s success on Friday.

As for the Gauchos’ key to success their strategy is simple: continue to attack the frontline as they did in their match against San Jose State.

Coach Stumpf found that his forwards are at their best when they act as the aggressor and must use their athleticism to their advantage against the Longhorns’ backline.

“The challenge that our frontline faces is to maintain possession so we can have numbers and pick and choose their moments to take a risk for a scoring opportunity,” Stumpf said. “We need to do a better job keeping the ball when it’s required and deciding when to drop a shoulder to beat someone 1-v-1.”

On top of their big match against Texas on Friday, the Gauchos host another non-conference opponent this Sunday in Sacramento State. The Hornets are currently 0-3 on the year including a 2-1 loss to San Jose State last Sunday.

Look for junior midfielder Maggie Pleis to be a focal point for Sac State. Pleis leads the team this season with one goal and three shots on goal. Pleis earned the honor of All Big-Sky Second Team as a sophomore and racked up 22 shots with 10 shots on goal for the Hornets last season.

Heading into this weekend, Stumpf emphasized that his team must be very mindful and take care of themselves.

“Friday night is going to be very physically demanding on us. No matter what happens, we will have to put that behind us and do everything we can physically and mentally to be ready for Sacramento.”

The Gauchos kickoff their match with Texas tomorrow at 7 p.m. and Sac State on Sunday at 1 p.m at Harder Stadium.