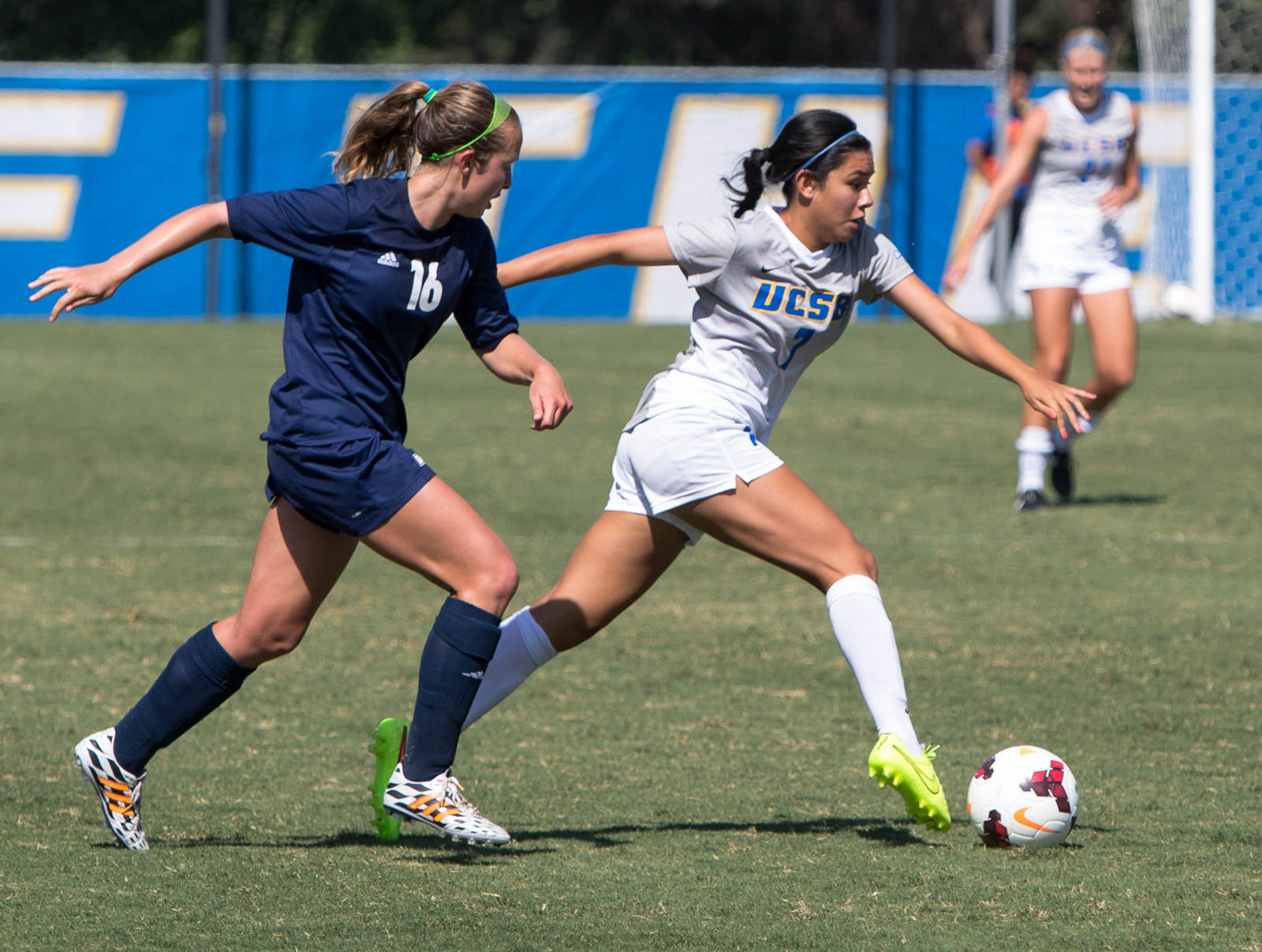 Friday was a refreshing welcome for Head Coach Paul Stumpf and UCSB’s women’s soccer team as it played its first home game of the year versus the San Jose State Spartans. Learning from last Sunday’s tough loss at USF, an early goal put the Gauchos in a favorable position until San Jose State answered with a first half goal of its own, sending the game into extra minutes and finishing in a 1-1 tie. UCSB remains winless with an overall record of 0-2-1 as the draw gives San Jose State a 1-1-1 overall record.

The match was ignited by the Gauchos aggressive play in the game’s first 45 minutes. At the 11:16 mark, a Spartan loose ball was gathered by freshman forward Mallory Hromatko, who then pushed it down the right side of the field until she booted it in the upper left corner of the goalpost. Hromatko tallied in her first career score and snapped UCSB’s two-game goal drought.

“Before this game I told myself I need to take people one on one more,” Hromatko said. “I just put my head down and went towards the goal and it all worked out.”

However, as the game neared its 28th minute, the Spartans responded with a goal of their own. Freshman forward Darriell Franklin managed to sneak in a score toward the bottom left corner of the goalpost. While a front line of UCSB defenders seemed ready for the attack, a precise assist from junior midfielder Maricruz Chapa helped set up Franklin for the score. Franklin collected the pass on the right-hand side of the box, and despite a diving effort from senior goal keeper Beth Ritter, Franklin evened the game at a score of 1-1.

The Gauchos’ urgent play carried over into the game’s second half, but they were unable to capitalize on their shots on goal. Sophomore forward Amanda Ball fought for loose balls as her physical play helped weaken San Jose’s defense. Her one shot towards the post could have sealed the win, but Ball’s attempt shanked just left of the goal with three minutes remaining in regulation leading to overtime.

“Offensively we did well, but we just need more work ethic up top connecting on passes with each other and working as a team,” Ball said.

With ten minutes added to the game clock, both teams battled for possession of the ball at both ends of the field. After a yellow card was called on freshman midfielder Sydney Magnin, tensions continued to rise as chippy play increased heading into double overtime. Although two corner kicks put UCSB in great field position, the Gauchos could not take advantage of the scoring opportunities, ending with a 1-1 draw in their first match at Harder Stadium.

“We only scored one goal in 110 minutes so unfortunately that’s not enough, Stumpf said. “We still have another big step to take.”

UCSB and SJSU combined for a total of 12 shots on goal in the 110 minutes of play. Five yellow cards and 37 fouls were called on the field during Friday’s match as each team evidently made its presence known.

A total of eight UCSB freshmen saw action against the Spartans, while four from the group played in the last two series of each overtime.

“We have so many young players getting important experience early on,” Stumpf said. “Those four freshmen were great during overtime and they’re going to get nothing but better going forward.”

The Gauchos shift their focus onto their next match on Friday, Sept. 4th as they will host the Texas Longhorns. Kickoff will begin at 7:00 p.m. at Harder Stadium.