The Daily Nexus
Sports
Men’s Soccer Enjoys Perfect Start to Season With 1-0 Win Over No. 8 Stanford
August 29, 2015 at 11:00 am by Michael Jorgenson 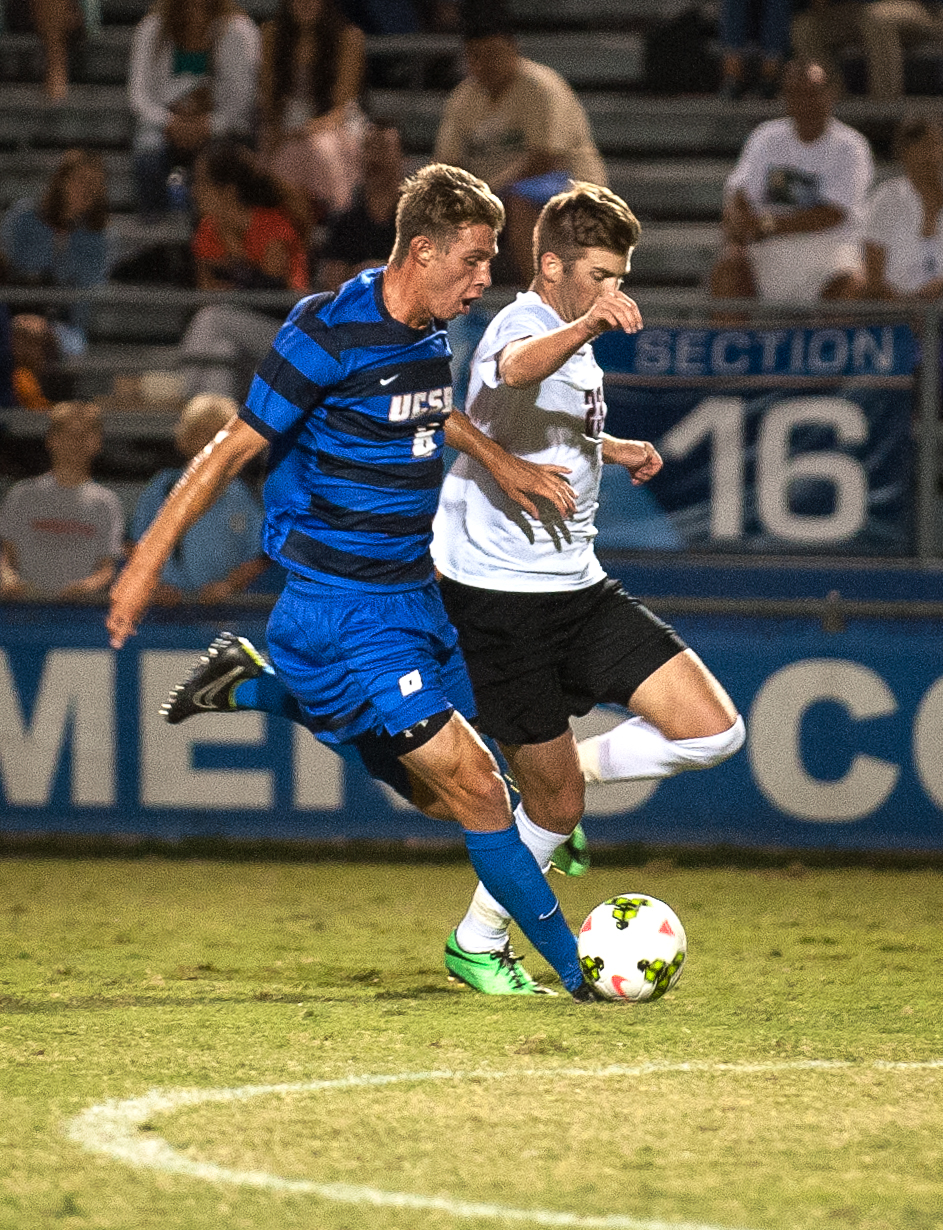 Head Coach Tim Vom Steeg didn’t want to use the word “revenge” coming into the UCSB men’s soccer team’s first game of the season against No. 8 Stanford, but that’s what the Gauchos got. An aggressive first half header by junior forward Nick DePuy was all Santa Barbara needed to come away with a 1-0 win and start its season off on a great note.

“We take a lot of pride in the way we played tonight,” Vom Steeg said. “I thought we battled all the way through, we got great bench contribution. I thought that we found out a lot about ourselves tonight.”

UCSB last faced Stanford on the road in September of last season in a game in which the Gauchos conceded three goals in the first 12 minutes on their way to a 4-1 loss. With a more experienced squad this time around, UCSB was able to keep finding ways to preserve a shutout and defeat the Cardinal for the first time since 2004.

“We’ve been playing that video for our guys for about eight months and looking forward to this game,” Vom Steeg said. “The gameplan was a little more defensive all the way because I knew that we could break out on them, which we did, but the defense won tonight.”

The first 10 minutes of the game was all Stanford as the Cardinal came out aggressive and was able to put some pressure on the UCSB backline. Stanford’s best chance of the half came 20 minutes in, when sophomore midfielder Drew Skundrich was found with a chipped through ball in the box, forcing UCSB goalkeeper Justin Vom Steeg off his line. Skundrich was able to get off a decent header, but the composed freshman made an outstanding leg save to keep the game scoreless.

“Justin did well. He got his first shutout and his first yellow card, so he’s got one more than I do in the season,” Vom Steeg said. “He was very clean with all the balls that came in. When you play with a goalie that the defense is confident having behind, if they have a player break through, you know Justin is going to make a play for you.”

After being subbed in with less than 16 minutes to go in the half, UCSB midfielder Seo-In Kim made an instant impact. Playing in his first regular season game with UCSB, the junior transfer from Duke used his speed to find space down the right side before sending in a slightly deflected cross towards the far post. Just as he did all last season, DePuy attacked the ball in the air and was able to power a header past Stanford junior goalkeeper Andrew Epstein to put the Gauchos up 1-0.

“When I came in, I knew I could make a difference,” Kim said. “Tim really talked about breaking the defense, breaking the defensive midfield line, that’s what I want to do. Just having Nick up there, you can’t really miss him, so it made my job easy.”

With the goal, DePuy has now scored in six of his last seven games dating back to last season with eight goals during that stretch.

Less than four minutes into the second half, Stanford thought it tied the game with a goal off a free kick into the box, but UCSB was saved by an offside call.

Much of the second half saw the Cardinal pushing men forward in search of a goal, resulting in a couple of good chances with just under 30 minutes to go. Fortunately for UCSB, a pair of Stanford shots from the edge of the 18-yard box were poorly hit, one being easily saved by Vom Steeg and the other sailing high.

A couple of fan favorites in sophomore forward Ahinga Selemani and freshman forward Geoffrey Acheampong nearly connected to put the game away midway through the final stanza. For the second time in the half, Selemani beat not one, but two defenders down the left side before finding Acheampong making a run into the box. The lefty tried to set himself up on his favored foot, making it a difficult angle for the shot, and he sent it just wide of the post.

Injuries then became an issue for UCSB as Kim, junior left back Ismaila Jome and junior midfielder Drew Murphy all required clock stoppages in order to be subbed out towards the end of the game.

The Gauchos found themselves playing mainly on their defensive half for the final 10 minutes of the match. Stanford’s last good chance came with 1:09 remaining, when a cross from the left wing found Foster Langsdorf wide open in the box, but his header went wide and an exhausted UCSB defense was soon able to celebrate the impressive 1-0 win.

Midfielder Kevin Feucht was perhaps the game’s best player. The sophomore transfer did all the little things, putting his body on the line to make big plays defensively before helping transition to offense.

“I thought Kevin was unbelievable tonight. The back line were really relying on him to kind of pick up things in front of them,” Vom Steeg said. “He threw his body around in the middle of that park, broke up so many plays and stretched out for tackles. That’s a player that’s going to help you win a lot of games with that kind of work rate.”

After missing last week’s game against Westmont due to a groin injury, defender Sam Strong was a big addition for the Gauchos at center back. The freshman looked comfortable all game, making few mistakes and winning a number of headers deep in the box.

“We just had to compete and not let them get behind us and that’s what we did,” Strong said. “My groin felt better two days ago and it was a good sign, so I knew I was going to play. I didn’t know I was going to go 90, but it felt good.”

Four Gauchos picked up yellow cards on the day, including DePuy, Strong and Vom Steeg.

“I really feel like this is a team that’s just going to get better and better,” Vom Steeg said. “What’s exciting about this group is come see us play in six weeks and I think it’ll be much better than we saw tonight, which was good enough to beat Stanford.”

UCSB will look to continue a great start to the season with games against Denver and New Mexico next Friday and Sunday.