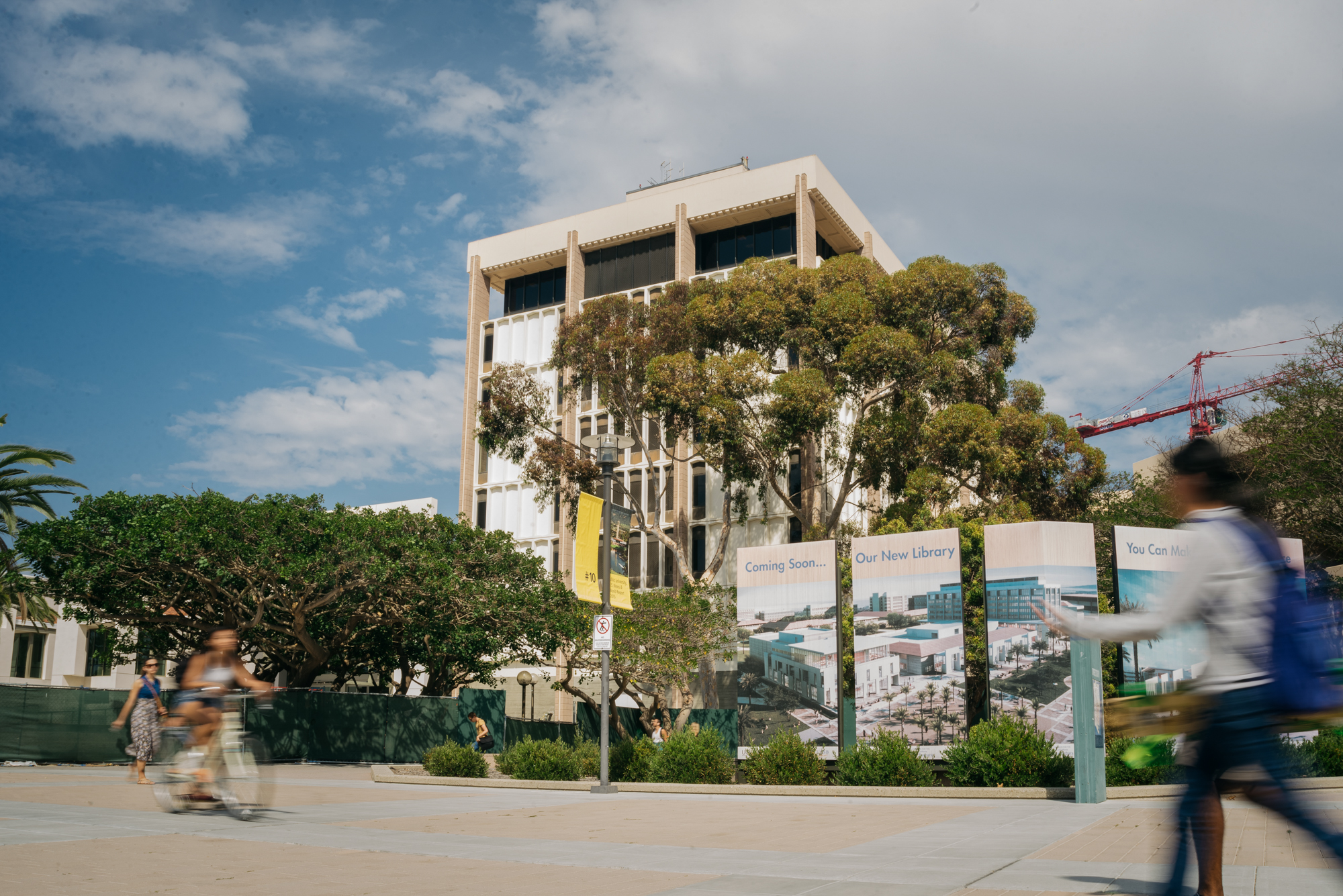 Final preparations are under way for the UCSB Library Addition and Renovation Project. The newest addition is meant to accommodate growing student enrollment. Hari Patel/Daily Nexus

The UCSB Library Addition and Renovation Project is ahead of schedule, set to be complete November 2015 with increased computers, outlets, information technology resources and study spaces.

The project is intended to update the library to accommodate growing student enrollment and maximize potential use for the latest advances in information technology. It includes the addition of a three-story building on the north side of the existing structure, seismic retrofitting of the existing eight-story tower and two-story building and a new Paseo connecting the three structures. UCSB Library Addition and Renovation Project is funded by a revenue state bond initiative of approximately $76 million.

Assistant University Librarian for Outreach & Academic Collaboration Rebecca Metzger said the project is the library’s first renovation in 35 years, but has “been in the works” for a long time.

“The need was identified 15 or so years ago,” Metzger said. “Enrollment was expanding and the needs of student and faculty researchers had developed, especially with technology use and the way that people study and do research.”

The project has been ahead of schedule, due to be completed this fall with the official grand opening ceremony planned for January 2016.

“Originally, we were supposed to open in January 2016, so now we are planning on opening the doors Nov. 16, 2015,” Metzger said. “So it’s ahead of schedule.”
Metzger said the addition to the library will create more room for students to study and feature a “diversity of seating.”

According to Metzger, the UCSB Library Addition and Renovation Project is unique because it has allowed for continued operation.

“For many libraries that go under such major renovations, they don’t all stay open throughout with completely uninterrupted service,” Metzger said. “We have done that and we will continue to do that.”

Metzger said UCSB Library has to accommodate larger crowds because it is a “destination” for students looking to escape densely-populated Isla Vista in search of a quieter study space.

“We found, especially on this campus, because Isla Vista is so densely packed and not the most productive study environment, that prior going under renovation we saw much higher traffic compared to a lot of our peer institutions,” Metzger said.

The addition also includes many advances in specialized information technology such as the Interdisciplinary Research Collaboratory, which is accessible to all students but geared toward faculty and graduate student research, according to Metzger.

“It’s mainly for advanced research with data — social science data, spatial data, data analysis,” Metzger said. “That would be a place that will have high-end computing and multiple display monitors and experts that can help people who are interested in doing hands-on research with data.”

“There are going to be some high-end computing work stations for students doing graphic design and multimedia projects who want to have higher-end processors,” Metzger said. “Also in that space you’ll be able to see some collaboration tables where students working on collaborative projects can actually look at the same screen and can plug a laptop into a bigger display monitor.”

According to Metzger, this space will also feature Summit Café as an alternative to The Study Bean, currently the library’s only dining option.
Metzger said the addition also includes group study rooms that students can reserve.

“Students will be able to go online, go on their phones, book a room in advance when they know they are going to need a space centrally to meet up with a group and study,” Metzger said.

According to Metzger, the university is striving to achieve a gold rating from Leadership in Energy and Environmental Design (L.E.E.D.) with innovations such as reflective outer materials to keep the building cool, advanced lighting controls with daylight and occupancy sensors, low-flow toilets and faucets, recycled-water irrigation, drought-resistant landscaping, low-toxicity paint and the use of regionally-sourced recycled materials.

Metzger said the university’s art and music collections, currently housed in their own library, are being moved to UCSB Library during the renovation project to make record-keeping and loaning more efficient.

“It allows us to do be able to do things quicker under one roof and provide the same level of service to everybody, and we don’t have to send people trekking around to go find different materials,” Metzger said.

Third-year environmental science major Kaylan Lamb said she uses the library as her primary study space and wishes there were more outlets and seating areas available.

“Many students rely on [the library] as a place to study or gather course materials, which is why it is so important to keep it updated,” Lamb said. “The lack of available outlets and seating inhibits a lot of students from utilizing the library to its full potential, as a lot of students rely on their computers to research or use as paperless notes. The library could be greatly improved with some aesthetic updates as well as increasing the am=ount of group seating and available outlets.”

Third-year pharmacology major Sharon Hsueh said the library is the only study space available to students at some hours, making the Addition and Renovation Project important for improving student life.

“The library is an essential place for students to study because it remains open longer than any other place on or off campus,” Hsueh said. “The shortage of seating during midterms and finals week will hopefully not be an issue anymore with the updated renovations.”

A version of this story appeared on page 6 of the Thursday, August 27, 2015 print edition of the Daily Nexus.