The Daily Nexus
News
New Bicycle Roundabout Implemented in an Effort To Reduce Accidents
August 27, 2015 at 5:00 am by Devon Dieling 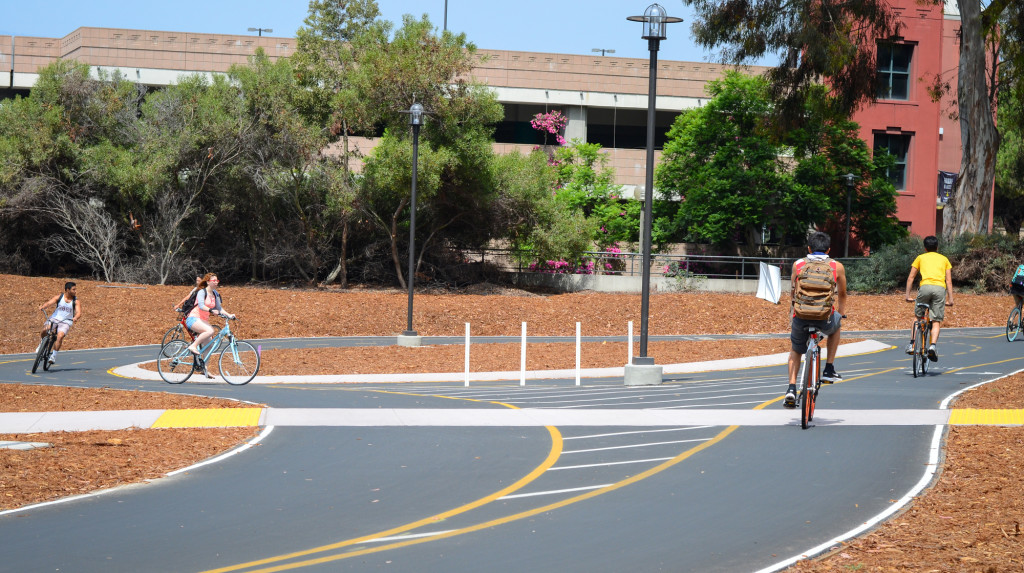 The Associated Students Bike Committee completed renovations of the new bicycle roundabout between Campbell Hall, the Recreation Center and the bus loop in July of this summer.

Construction of the roundabout occurred after years of students complaining about accidents near the Student Affairs and Administrative Services Building (SAASB) intersection. The new roundabout was constructed on top of the existing high-traffic T-intersection, paid in full by the university which will be reimbursed through A.S. Bike Committee student fees.

Previous A.S. Bike Committee Project Manager and alumnus Chris Bustos said plans for the roundabout have been discussed for years after the 2008 project to widen the T-intersection lanes did not prove to be a long-term solution.

“Since I took the position of project manager back in December of 2012, there have been talks about creating a roundabout at the intersection,” Bustos said. “The funding for the loop was what created such a delay.”

Bustos said the required funding to construct the roundabout surpassed what the A.S. Bike Committee could provide with their quarterly student fees, which prompted the committee to reach out to students for a successful student fee increase from the current $1.57 fee to $3.56 for Fall, Winter and Spring Quarter and the Summer Quarter fee of $1.32 to $3.00.

“I’m happy to say over the past few years transparency on the gritty details of how the money was spent during the bid processes has become much better,” Bustos said.

According to Bustos, projects such as the roundabout are great ways to show students’ fees at work, and the committee takes pride in better bike infrastructure that accommodates student needs.

“We always strove for the implementation of projects that would make the lives of students easier and safer while commuting across campus,” Bustos said. “We intend to connect the student voice to the UCSB administration.”

Fourth-year communication major Zach Drollinger said he was involved in a bike accident his freshman year that left him with a concussion.

“People need to be more aware on bike paths, it’s cool to hear that [the A.S. Bike Committee] is willing to make a difference if others aren’t,” Drollinger said. “Bike safety is generally overshadowed at UCSB, but bike accidents occur every day.”

“We hope to target incoming freshmen in the coming years to educate our newer riders in safe biking practices like proper locking, safe signaling and basic repair,” Freeberg said. “We intend to continue improving UCSB’s biking infrastructure with upcoming projects with a focus on safety.”

According to Freeberg, the A.S. Bike Committee received a gold rating from the League of American Bicyclists, a nonprofit organization dedicated to promoting cycling for fun, fitness and transportation.

“We are working to improve this rating to ‘platinum,’ which is their highest recognition,” Freeberg said. “As of the most recent evaluation, only Stanford and UC Davis hold the top rank.”t

Please help us in pursuing the platinum award by contributing your input in the short survey before September 18! Below is our Facebook post with the link to the survey. ??