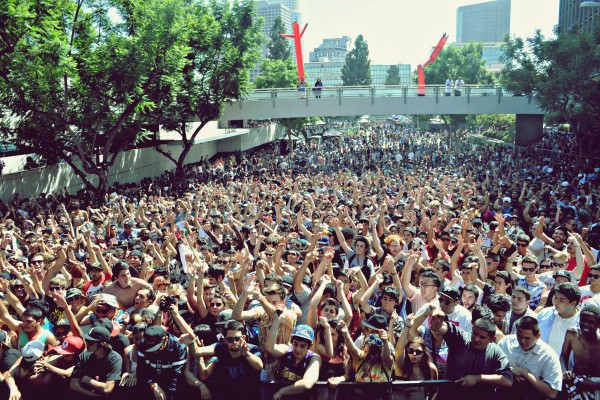 Mad Decent Block Party, an outdoor festival-esque music event, will hit the road on a tour that will hopefully redefine people’s ideas of what a “block party” should be like. And just like the previous six, this one won’t be any less timid.

What initially started off as a small party held on the block outside of Diplo’s record label headquarters seven years ago, has now evolved into a festival that spans various big cities across North America. With every year seemingly better than the previous, MDBP now features prominent artists of today’s music scene and hopes to deliver high energies and good vibes at every single one of its 22 stops in 19 cities. No doubt it’s dubbed “America’s Biggest Block Party.”

A two-day leg of the tour will be held at Los Angeles Center Studios, a facility in downtown L.A. that usually serves as a home for many movie and show sets. There is no other venue that would serve its purpose for the festival better than LACS — dancing away to good music while surrounded by buildings that have appeared in some of the most well-known movies seems to perfectly embody the spirit of the city.

Mad Decent’s diverse first-day lineup will present performers such as Major Lazer, CL, Netsky, T-Pain and everyone’s favorite — Riff Raff. The second day will feature Cut Copy, Thomas Jack, Klingande, Vic Mensa, Grandtheft and the man himself, Diplo. The event is expected to attract a multitude of people (all aged above 18 of course) from assorted crowds, ranging from regular Angelenos to music aficionados and dancers.

With a promising lineup and great venue, Mad Decent Block Party in Los Angeles is holding expectations for its attendees high. To end the summer at an event such as this one guarantees to leave you buzzing with energy.